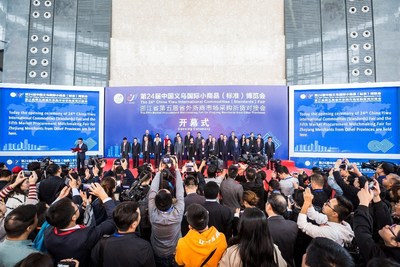 As the official media partner of Yiwu Fair, Huanqiu.com has invited media outlets from seven countries, including Reuters and United Press International, to join efforts to promote this year's event. In addition, Huanqiu.com has issued a series of reports on the 2018 edition of Yiwu Fair that includes texts, images and short videos, providing readers with a comprehensive overview of the event.

Beginning this year, the event has been re-named the China Yiwu International Commodities (Standards) Fair, becoming China's first international fair to introduce a system of standardization across all aspects of the event. The fair consists of one exhibition zone showcasing the new "standardization" theme of the event and one exhibition zone, the "brand theme" zone featuring high quality products made in Zhejiang province, in addition to several industry demonstration zones, each of which complies with the newly introduced standards.

This year's 100,000 square-meter fair includes 4,136 booths built to internationally-accepted standards with exhibits from 14 industries, including hardware, machinery and electronics. Highlighting precise trade matching with overseas purchasers, the fair has attracted 2,150 firms from 26 Chinese provinces, municipalities and autonomous regions as well as several foreign countries, including the US and Russia.

Yiwu Fair, founded in 1995 as an international commodities exhibition approved by the State Council of China, has now become the biggest of its kind in China and received certification from the Union of International Fairs.