A bridge, weighing 29,000 tons with a length of 170 meters, was successfully rotated to its targeted position in Jining, East China's Shandong province on July 11.

In 66 minutes, the bridge rotated above the Xinxiang-Yanzhou Railway, so as to not interfere with the railway below.

The bridge, built by Railway No. 10 Engineering Group, is the largest T-structure road swivel bridge in Shandong to date in terms of its length and weight. It is a part of a new expressway that connects Weishan in Jining with the provincial capital Jinan. 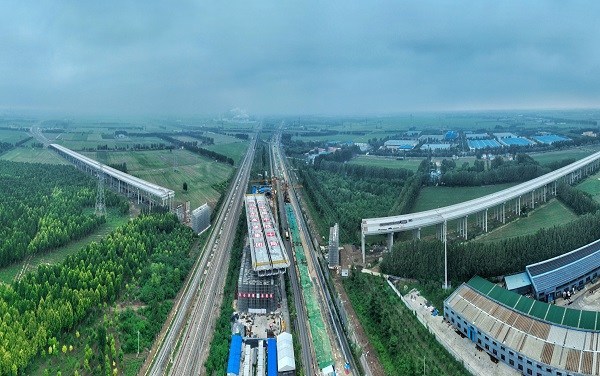 The southern section of the Jinan-Weishan Expressway, one of Shandong's key projects, is 59.7 kilometers long, has two-way four-lane standards, and has a designated speed limit of 120 km per hour. This design will help to integrate the development of the provincial capital economic circle and western Shandong.

The swivel construction technique has been widely used in China to build bridges. The approach expedites construction while assisting in overcoming environmental and traffic-related limitations.