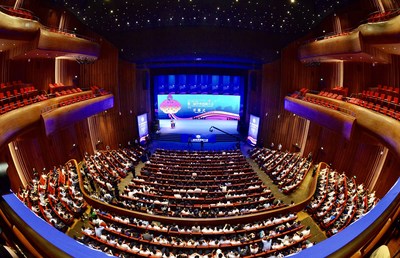 As the gateway to the Silk Road, Xi'an bears the responsibility of igniting the Belt and Road dialogue with friends in the world. To this end, Xi'an invited representatives from notable countries to share new opportunities for open trade, build a new division of economic cooperation, share in new innovation and development in technology to foster entrepreneurship, and to develop a truly international and mutually beneficial environment along the Silk Road.

"At the Boao Forum for Asia Annual Conference 2018, President Xi Jinping made a promise that China will never close its door to the outside world and, in fact, China will open the door even wider. The Belt and Road Initiative has progressed from a vision to a reality and has entered a new phase of implementation," said Mayor of Xi'an, Mr. Shangguan Jiqing. "As the starting point of the ancient Silk Road, Xi'an has become the frontier for the opening of China and, with the opportunity of the Belt and Road Initiative, the city is entering into its own new era."

To demonstrate its commitment to advancing economic opportunities and output from Xi'an, the General Association of Xi'an Entrepreneurs was developed comprising of over 600 member companies. The Association will provide a platform for Xi'an entrepreneurs to engage in economic exchange, promote cooperation and prosperity in business through the integration of resources, develop the city's entrepreneurship programs, and maintain an important role in building Xi'an as an international business hub.

At The 2nd World Xi'an Entrepreneurs Convention, representatives and business leaders from around the world showed their commitment to the development of Xi'an through mutual learning and inclusiveness while we seek to build the New Era together. This is just the first conference in a series that will bring minds from around the world together to develop a mutually beneficial economic system for the future.

Xi'an is the capital of the Shaanxi province, located in central China. As the ancient capital of 13 dynasties, Xi'an marks the Eastern end of the Silk Road, an ancient network of trade routes connecting the East and West. Xi'an is most well-known for its cultural sites such as the Terracotta Army and ancient city wall, but is becoming a central hub in China for trade, innovation and transportation.