A look at a home influenced by design ideas around the globe.

Home for Joel Ang is a three-room HDB resale flat at Everton Park, a quiet estate that he describes as having a lot of warmth. In recent years, the quaint, old-school neighbourhood has seen cafes and restaurants set up shop, adding to the appeal of the area.

Joel was attracted to the area for its vibe and its convenient location. When asked about the aesthetic of his home, he referenced several key ideas. He loved the Japanese philosophy of wabi-sabi, the art of finding beauty in imperfection.

Among other things, he believed that less is more. Overall, he wanted his apartment to have an oldmade- new, child-like feel.

Opting to design it himself, he cross-pollinated these ideas into his first home masterfully. Joel, an engineer in the aviation industry, also brought his exacting eye for detail into crafting each space with care. The result is a space that showcases his creative spirit. Rough-hewn concrete surfaces work with matte finishes to create an understated abode. The avid globetrotter also found unique decorative accessories on his travels, which now pepper the spaces.

Is this your first home?

Yes, I bought it when I turned 35. I came across this flat by chance. I was looking for a home in the town area. One day, I happened to be in the area to check out a cafe. I didn’t know that there were HDB flats here. So, very quickly, I searched online. Through one of the first agents I met, I saw this flat, and I liked it. I bought it two weeks after I saw it.

How did you come up with the design concept?

I travel a lot, and that gives me a lot of ideas. I was also already preparing to buy a home. So, while staying in hotels and going to restaurants overseas, I paid attention to ideas. They are very avant-garde in how they use different textures. I also looked at interior design magazines and Instagram a lot. More importantly, I love furniture. In designing my home, I looked at furniture first and then the space. I relate more to the furniture, and I want the space to fit them.

Which places gave you the most inspiration? 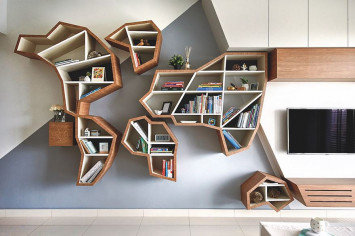 London and Copenhagen gave me a lot of inspiration. For London, think the new Tate Modern wing! I like the concept of wabi-sabi, but it’s not restricted to only Japanese aesthetics. The Danes have done a pretty good job at achieving a full wabi-sabi effect. It’s more cosmopolitan and less culturally influenced. An example is Restaurant Noma.

What did you want to convey in your home?

Basically, I want to project in my living spaces the energy of a city yet the peace that individual beings so desperately seek. Think Tokyo, bustling and always stimulating – yet with pockets of greenery, Zen gardens and minimalist interiors. So my choice of this apartment in a very old estate, hidden out of sight from the famous Pinnacle@Duxton, exemplifies city living while not being in the city centre. Think communal HDB living on a floor that has only four units. Very conflicting ideas, I know.

Why did you decide to design it yourself?

As a creative person, I respect creative folks and prefer to let them use their ideas. When I go to a hairstylist, I would let them decide what’s best. However, the interior designers I met had ideas that did not match the main concept I had in mind. I also couldn’t find good chemistry. My home is a small space. So, for example, many of them preferred to remove the walls to make it an open concept. However, I prefer the Japanese style of interiors, where spaces are hidden and don’t really interact with the living area. I also wanted to create something different.

What were the main challenges you faced?

I knew what I liked in terms of my personal style, aesthetics and taste, but I didn’t know how to design or put my thoughts and ideas into workable designs. Having zero interior design experience didn’t help. Because I designed everything, I had to decide every single detail. I had to visualise everything very quickly. There was also a lot of quick research and showroom or furniture shop visits for many on-the-spot decisions. I had to know all the specifications and be very nimble. The worst was sourcing for materials myself. The tiles specially imported from Italy were a lot thinner than most tiles. Cutting into odd-sized tiles was difficult and I didn’t order that many spare pieces.

Tell us about your favourite spaces in your home.

I don’t have any favourites, as a home is a home, in all honesty. But I do use some spaces more than others. The Japanese room is where I spend time having some tea and reading. My friends hang out here for sake as well. I like the kitchen mainly because it took a lot of time designing it. It has many elements there that add interest. It’s a nice place to hold gatherings over potluck or a meal. The living area has a sound system designed for movie nights over drinks, which I also love.