BEIJING, Nov. 3, 2017 /PRNewswire/ -- Achain confirmed to collaborate with the Android Studio Community to make learning of the blockchain technology more accessible to developers.

Achain is a global blockchain network committed to promoting a boundless blockchain reality through a structured ecosystem. It implements leading technologies, such as smart contract sandbox and DPOS distributed consensus mechanism, since 2015.

Its recent partner, Android Studio's Chinese Fan Community, is an open platform for all users of Android Studio in China, Android's official IDE. Developers can share and access tips, solutions, instructions, open sources, translated literature, and more, on the community's online forum. Founded in May 2013, it is one of the largest mobile developer communities today, attracting an average of 250,000 daily active users. 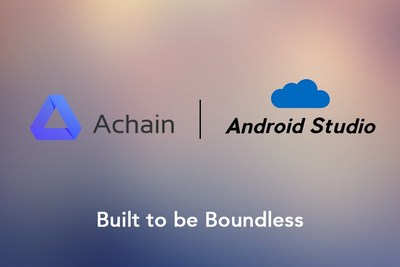 AchainXAndroid Studio: Built to be Boundless

As a pioneer of in-depth research and development in its field, Achain announced its plan of providing the Android Studio community members with professional tips and tutorials on cutting-edge blockchain technology. At the same time, the Android Studio community proposed to devote an entire section of its platform to Achain, releasing first-hand reports and information about the development of the project.

The highlight of this collaboration was the mutual commitment to co-organizing a professional contest among developers and enthusiasts alike. Both sides believed the event to be beneficial in fostering interest and in developing technological skills among preeminent developers of current generation.

"We share a mutual philosophy of openness," asserted Tony Cui, founder of Achain, "which lies at the heart of P2P sharing economy. It calls on the entire society to actively participate in the truly boundless blockchain future."

Cui appreciated and highly regarded the opportunity for collaboration as a cornerstone to fulfill Achain's future plan: constructing a more intelligent, interconnected, and innovative blockchain system. He also hoped for future bonding with wider communities and teaming with other leading projects in the field.

Here's the salary you need to earn to afford these homes in Singapore
Jackie Chan: I've nearly lost my life over 200 times
Glass tabletop 'explodes' during hotpot dinner, leaves behind bloodied mess
5 reasons why UNDONE watches make classy, customised gifts for someone special (including yourself)
Singaporean singer A-Do gets a little heavier and netizens have opinions
$100 only? Singaporeans tickled by 'ungrateful' kid
Jay Chou enjoys atas birthday weekend, but wife never give face
Man, 55, jailed for molesting woman on MRT train with his exposed genitals
YouTuber slammed for faking ankle injury to get business class upgrade on Cathay flight
Watch out for the bike: Teens cycling in Plaza Singapura
Handmade CNY decorations at Fusionopolis stolen within a day of display
Army women who survived Tekong share how they handled their period in the jungle

Malaysia's largest amusement park opens in JB tomorrow
5 game-changing home appliance cleaning hacks for CNY
I quit my dream job, went out of my comfort zone and I'm happier than ever
R&B Tea free upsize for those born in the year of the Rat, Sheng Siong CNY promotions & other deals this week

Endless visiting: What AsiaOne staff wish Chinese New Year is like
After 18-year wait, NSman remembers to return $80 borrowed from officer
Maid, 34, arrested for attacking employer with knife
Grab driver calls the cops on couple for getting 'intimate' in her car