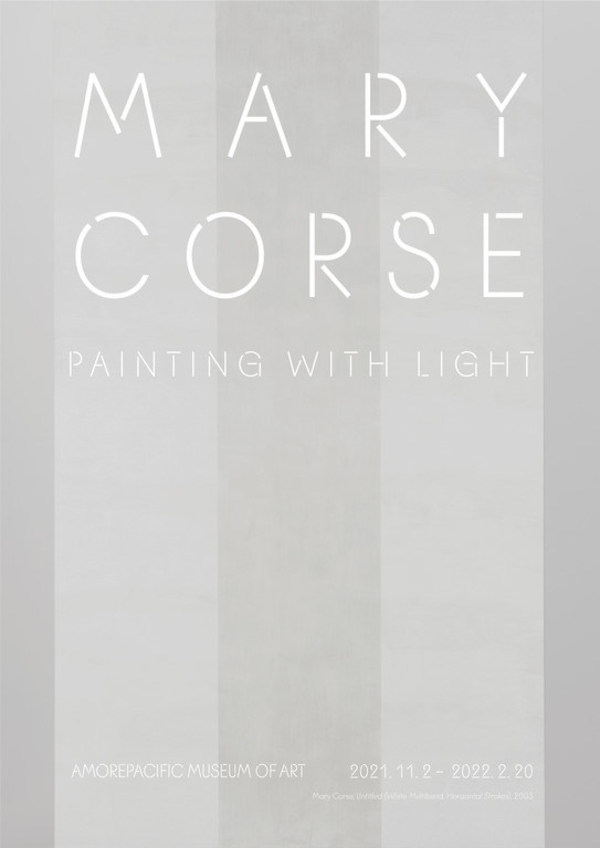 Over the last six decades, Corse's work has continuously investigated perception, properties of light, and ideas of abstraction. Comprised of 34 monumental works selected from Corse's expansive career, this exhibition highlights her ambitious and complex investigations in painting, explores the manifestation of light and its phenomenological experiences, and forges for Corse a unique place in the history of abstraction and twentieth-century art. The featured works have been drawn from various series, including the artist's seminal White Light paintings, begun in 1968, examples of her Black Light paintings from the 1970s, works from her clay-based Black Earth series, Arch and Inner Band paintings, as well as sculptural pieces including her argon light boxes, and a monumental free-standing Beam.

"I want to thank Amorepacific Museum of Art for my first museum exhibition in Korea. I am very honored to have the privilege and I hope we experience from so far away a like mind in our shared humanity," said Corse. The exhibition reveals a deep insight into the artist's practice and ongoing dialogue with perceptual awareness. The works embody rather than merely represent light, inviting viewers to experience them in innovative ways. Collectively they open themselves up to their environment and create an experiential encounter for viewers, grounded in vision and movement. APMA sincerely hopes that this exhibition will provide new opportunities to expand and transcend one's perspective on light. For visitors' safety, pre-reservation made via APMA's official website (https://apma.amorepacific.com) is required for all entrants. 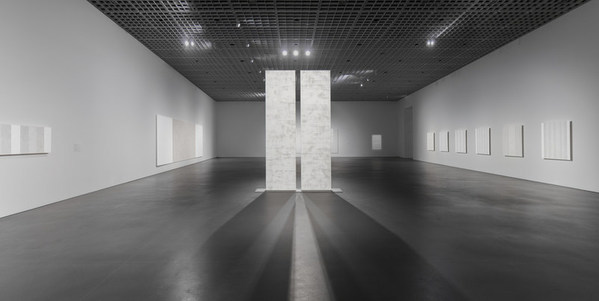 * Exhibition Room 1 begins with Mary Corse's seminal White Light paintings series. In 1968, she developed a radical painting technique that combined layered glass microspheres over acrylic paint. The industrial material is used to optimize the visibility of road markings on highway interstates, which she first noticed while driving along the Pacific Coast Highway in Malibu. Scattering these tiny glass particles in a thin layer over her surfaces, Corse developed an aesthetic that harnessed the refractive index of light. As light interacts with Corse's paintings, it oscillates and responds to our position and movement as viewers. The luminance of her work exposes physical brushstrokes that emerge and fade and a surface tactility that glints and glows but then ceaselessly flattens. Two other bodies of works - the Inner Band series and Untitled (Beams) (2020) - continue in the lineage of the White Light paintings.

* Exhibition Room 2 introduces the Color Painting series and the Arch paintings. In the late 1990s, Corse began producing works incorporating primary colors - red, yellow and blue - after solely focusing on monochromatic black or white paintings. By layering the hues with glass microspheres, the artist found that she could avoid "just painting a picture of color" and instead "make color be the light." Interested in the fact that all colors are present within white light, with these paintings she attempted to "go deeper into white light," revealing pure, saturated color. As products of white light, the primary colors, along with the use of glass microspheres, expand her longstanding examination into the properties of light and human perception. In her Arch paintings, Corse shifted into a more structured form reminiscent of the architectural post and lintel. Beginning with a single arch in either black or white, these paintings contain a shortened band to allow the outer edges to meet at the top. This motif, often appearing like doors or acting as portals, brings Corse's work closer than ever before to a representative image, and so relate more explicitly to the human body and the space it inhabits. These works play with physical, phenomenal, and representational space, creating a push-and-pull effect that seems to draw the viewer's gaze into and out of the canvas's surface.

A monochromatic shaped-canvas painting produced during her time at the Chouinard Art Institute in Los Angeles (1964-68) is exhibited in * Exhibition Room 3. At the Chouinard, Corse began experimenting with the physical structure of the canvas as altering its shape allowed her to move beyond the traditional rectangular format she had been exploring in her abstractions. Taking the form of octagons, hexagons, and diamonds, her shaped-canvas works consisted of large monochromatic fields with white borders. The Octagonal Blue (1964) shows the introduction of fragments of micro-element, mica in an attempt to capture light in her paintings.

* Exhibition Room 4 shows Untitled (Electric Light) (2021), from her Light Paintings. When she originally produced these works in the late 1960s, the light boxes represented Corse's most concerted pursuit of, in her words, "an objective truth." The light boxes achieve this ultimate goal by using light as a medium itself and compelled her to seek out a way to "put the light into the painting." Her studies in physics, which aided her production of the works, taught her that such pursuits were futile. This revelation that human experience is inherently subjective freed her to reintroduce subjectivity into her work by returning to painting and re-introducing the brushstroke. Corse's experience with the light boxes also committed her to discover a way to make her paintings generate light, not just represent or allude to it.

* Exhibition Room 5 transitions to her Black Light series. Corse's pursuit of light was not only limited to its emitted and reflected properties. By the early 1970s, she introduced into her practice black paint mixed with acrylic squares. Extending her exploration of materials, the Black Light paintings adopted both acrylic squares and glass microspheres to reflect and refract the light in addition to its absorption by the dark pigment, resulting in a glittering black surface. The cosmic effect of the Black Light series reveals Corse's interest in the oscillation of light conditions, connoting the historical nature of light and dark as concepts as well as that of distance (such as the stars in the night's sky), subtlety, and the gradation of radiance. Corse has stated, "I try to bring in the reality of our moment."

Corse's experimentation with the black surface continues to * Exhibition Room 6. After her move from Los Angeles to the remote Topanga Canyon west of Los Angeles in the early 1970s, Mary Corse began making ceramic works to explore what she felt was the opposite of her ethereal White Light paintings, which she had been producing since 1968. Her works in clay (earth) were an attempt to "ground" her paintings, and tie them to the physical, earthly realm. She initiated the Black Earth series by taking plaster impressions of a large flat rock in the hills nearby her home. Once the plaster molds were made, they were transferred to clay, then transformed into fired ceramic tiles with a glossy black glaze in an updraft kiln custom-built by the artist. The works were assembled in a grid-like format and mounted on the wall to create the Black Earth series.

Mary Corse (b. 1945, Berkeley, California) has pursued a sustained investigation of abstraction, materiality, and perception through subtly gestural and precisely geometric paintings made over a six-decade career. Emerged amongst a generation of artists in the mid-1960s that were living and working in California, light became both the subject and object of her art. While studying at the Chouinard Art Institute in the late 1960s, she began experimenting with unconventional media and supports, producing shaped canvases, works with Plexiglas, and illuminated boxes. Between 1966 and 1968, her interest in the relationship between light and perception led to her experiments with argon light boxes powered by Tesla coils. Her work developed in parallel but at a remove from artists associated with the Light and Space movement in Los Angeles, to which she has often been compared. Unlike those artists, Corse's experiments with electric light ultimately led her back to including visible brushstrokes in her paintings, a subjective gesture she had previously removed. In the 1990s, Corse reintroduced primary colors into her paintings based on her understanding of color as constitutive of white light. She continues to explore notions of subjectivity, perceptual awareness, and the experience of radiant light and her paintings open themselves up to their environmental surroundings by capturing and refracting light while engaging the viewer in both physical and metaphysical encounters of body and mind. Corse's innovative handling of materials that both capture and refract light ensures that our perceptions of her paintings change as the lighting shifts or we move about the space. Corse makes the inherent abstractness of human perception felt instead of merely seen.