- Portable solution that takes the hard work out of measuring 2D & 3D Modeling.

- Furnish and decorate at your fingertips within minutes. 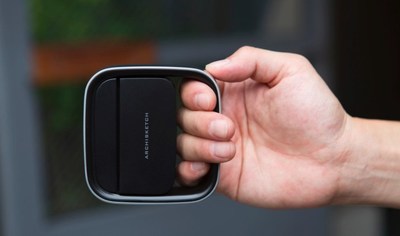 At the core of Archisketch is a technology that captures space using AR and presents in to 3D/VR data. When a user captures the corner of a room, for example, the device automatically converts it to a 3D model. The user can then create various 3D images in real time by choosing and placing furniture, wall paper, and flooring materials according his or her personal tastes. All furniture pieces stored in Archisketch's library have the same specifications and dimensions as those actually sold in stores. The application also links directly to the websites of furniture manufacturers, allowing users to make purchases easily and conveniently.

The device begins by connecting to the user's smartphone, after which the AR-enabled device's laser sensor activates, measuring the distance between the user and the walls of the room in which the user stands. It then generates a 3D image of the room.

The device saves time and money for people preparing to move, and helps them design optimal spaces in their new home. In addition, the device can be used in various B2B sectors, such as interior design and real estate, anywhere in the world.

CEO Lee Jusung of Archisketch said, "These days, people are trying to do the interior design for their own homes in order to make their living spaces more lively, dynamic, and unique. People now regard their homes as multi-purpose spaces where they can relax and enjoy hobbies, instead of viewing them merely as places to sleep. However, doing the interior design for a new home is no easy task for most people. You have to check and measure every wall and corner of the home and find furniture to create the kind of spaces you want. With Archisketch, however, all the user needs to do is attach the device to his or her smartphone, and it will scan the entire space all at once. In this way, the device makes it much easier and more convenient for ordinary people to do 3D real-time modeling and try their hand at interior design."

The Archisketch device will be displayed at the Samsung Developer Conference in the United States on October 18 and a startup booth at Web Summit 2017, to be held in Lisbon, Portugal, on November 6.

To contribute to this Kickstarter campaign, please visit http://kck.st/2yvvJBN.

Archisketch's team got together for a habitat project, a volunteer activity group to build and design homes for disadvantaged people. After debating about Architecture and the problems that lie within the current system, Archisketch has been founded and joined by experts in electronics and telecommunication fields. Archisketch is a member company of the K-ICT Born2Global Centre.

K-ICT Born2Global Centre is a full-cycle service platform for global expansion. Since inception in 2013, Born2Global has been setting the standard for successful startup ecosystem as the main Korean government agency under the Ministry of Science and ICT. Born2Global has expanded and transformed startups to be engaged, equipped and be connected with the global market.