Artprice and Artron Have Just Created an "Art Media Mogul"

After seven years of collaboration, cultural exchange and regular trips between China and Europe, the two founders and presidents of Artron and Artprice, WAN Jie and thierry Ehrmann (who are exactly the same age and share the same commitments), share the same vision of the Global Art Market and the same passion for Art within the context of a loyal and mutually respectful friendship. 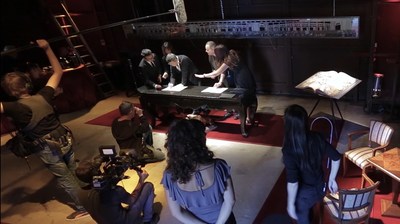 This long and infallible relationship has allowed both groups to work extremely quickly without cultural barriers to build an "Art Media Mogul". By analogy, it's exactly as if Baidu and Google were merging their respective knowledge.

Official video of the Friday 12 October 2018 signing ceremony and talks about the 10 new development agreements at Artprice's head office in France:

A series of development agreements in principle (10, soon to be delivered) was discussed and they go far beyond the exclusive distribution contract allowing for Artprice subscriptions to be marketed through the Chinese internet to millions of Chinese art collectors - via Artron Group's customers - in China.

The scope of the 10 new development agreements discussed on 12 October 2018 will have a structural impact on the Global Art Market and on Art History, according to Art historians, in a way that no-one could have imagined. At the same time, Artprice and Artron are on the verge of an extraordinary evolution during which, from a shareholder perspective, Artprice will change in dimension - economically, financially and historically - as of 2019.

Artron Art Group (Artron), a comprehensive cultural industry group, is committed to inheriting, enhancing and spreading art value. Based on abundant art data, Artron provides art industry and art fans with professional service and experience of quality products by integrated IT applications, advanced digital science and innovative crafts and materials. Artron is the world's largest printer of art books with more than 60,000 books and auction catalogues and a total publication volume of 300 million a year. Artron.net is the most respected brand in the Chinese art world. Artron.net has more than 3 million professional members in the art sector and 15 million daily visits on average which rank the first among global art websites. It is the primary choice for art professionals, investors and followers to enter the world of art. Artron is celebrating its 25th anniversary. Established in 1993, Artron Art Group celebrates its 25th anniversary this year.

Artprice is the world leader in Art Market Information with 4,500,000 members. Founded by thierry Ehrmann (see certified Who's who(c) biography https://imgpublic.artprice.com/img/wp/sites/11/2018/10/bio-2019-whos-who-thierry-ehrmann.pdf ) in 1987, it permanently enriches its databanks with information from 6,300 auctioneers and it publishes a constant flow of art market trends for the world's principal news agencies and approximately 7,200 international press publications. It has over 30 million indices and auction results covering more than 700,000 artists. Artprice Images(R) gives unlimited access to the largest Art Market resource in the world: A library of 126 million images or prints of artworks from the year 1700 to the present day, along with comments by Artprice's art historians.

Artprice gives access to the world's leading Standardised Marketplace for buying and selling art. Artprice is preparing its blockchain for the Art Market. It is BPI-labelled (scientific national French label).

Server group SAS was founded in 1987 by Thierry Ehrmann and controls Artprice.

Headquartered in the Contemporary Art Museum: Abode of Chaos/Demeure du Chaos 69270, Saint Romain au Mont d'Or, Lyon, France, the Server group SAS has been a major collator and distributor of judicial, legal and economic databases for 33 years. One of its key lines of development has to open-up hitherto opaque markets using its in-depth knowledge of law and electronic media. Its philosophy is to promote information transparency and access for all through the new information technologies.

Server group SAS is both a company and a publishing imprint for databases and paper publications. It currently controls 9 companies and a dozen minority stakes. Serveur group is, among other things, one of France's longest-standing ISPs (first data bases connected to Internet in march 1985 with Serveur SARL), via a number of subsidiaries. This has given it a deep involvement in the web with an internet culture stretching back over thirty three years.

Artron produces all the catalogues of Chinese auction houses and handles the postal or digital mailing of these catalogues to their final customers. It will be possible for Artprice subscriptions, sold exclusively by Artron in China, to directly reach the target audience.

Similarly, Artprice will be featured on the homepage of Artron.Net which, according to many studies, is the most respected brand in the Chinese art world. Artron.net has more than 3 million members and receives more than 9 million online visitors per day (on average) or 270 million visitors per month to their website.

Via Artron, there exists a massive potential demand for Artprice subscriptions, including its unique decision support tools, because these tools allow China's collectors, art professionals and its museum industry to acquire Western artworks with total assurance that they have complete mastery of all the relevant pricing information, the artist's background and their 'economic profile'.

Thanks to Artron's expert advice, Artprice fully complies with the specifications and conditions of China's internet laws.

To do so, Artprice has deployed the obligatory Alipay and WeChat Chinese payment platforms (1.8 billion users) for Chinese buyers after developing no less than 54 million pages in Mandarin on its Internet accessible data banks (which took seven years).

In order to conform to China's internet laws, Artprice spent two years rewriting all its data bank code in order to eliminate all US and European corporate source code containing cookies, tags, metadata or backdoor elements (amongst other elements).

What was discussed on Friday 12 October 2018 far exceeds what was originally planned. It follows on from a summit meeting held in March 2018 in Beijing between Artprice's and Artron/AMMA's executive teams, and should broaden the two companies' Marketplaces.

To understand the power of Artron and its unavoidable position in China, follow the link to this video in English:

The exclusive contract for the distribution of Artprice subscriptions to Artron's customers and the ten new additional agreements in principle can be implemented rapidly on the basis of the two companies' mutual knowledge resulting from seven years of constant partnership, proving that long-term collaboration, patience and hard work are the keys to success.

In 2018, China accounted for 45% of global online art trade, conducting twelve times more online transactions than the United States. China has a huge advantage over the West because it is building its market economy directly on the Internet. Moreover, no-one doubts that China's Art Market will account for 70% of the global Art Market as of 2020. Artprice, as the world leader in Art Market information, had to be central to its market. It should not be forgotten that France accounted for 4% of H1 2018 results.

For further information regarding the historical background of relations between Artprice and Artron/AMMA and its economic consequences, please refer to Artprice's reference documents and, in particular, to its 2017 registration document filed with the AMF (France's Financial Markets Supervisory Authority) on 1 June 2018 (in accordance with the Article 212-13 of the AMF's General Regulations) and to Artprice's Press Releases.

More details, video clips and photos of the signing and accompanying speeches will be online shortly on Artprice's and Artron's social networks.

Artron Art Group (Artron) is a general cultural industry group rooted in the art field and aims to "serve the people with art" by "serving the people's art", inherit, enhance, spread and realize values of art, and inherit excellent art and culture and enhance their values in professional art markets; spread values of art and culture and convey the beauty of art to people's daily lives in public art markets.

As China's largest comprehensive art service platform, Artron.net delivers four solutions including Smart Archive, Smart Show, Smart Deal and Smart Reading. In addition, upon resources and professional studies of Artron's art market monitor agency (AMMA) and almost 20 years' of experience in the field of art, it has established long-term strategic cooperation with governmental bodies such as the Ministry of Culture, cultural institutions such as the Palace Museum, global art universities, internet companies such as Baidu and overseas research institutes.

Artprice is listed on the Eurolist by Euronext Paris, SRD long only and Euroclear: 7478 - Bloomberg: PRC - Reuters: ARTF.

Artprice is the global leader in art price and art index databanks. It has over 30 million indices and auction results covering more than 700,000 artists. Artprice Images(R) gives unlimited access to the largest Art Market resource in the world: a library of 126 million images or prints of artworks from the year 1700 to the present day, along with comments by Artprice's art historians.

Artprice permanently enriches its databanks with information from 6,300 auctioneers and it publishes a constant flow of art market trends for the world's principal news agencies and approximately 7,200 international press publications. For its 4,500,000 members, Artprice gives access to the world's leading Standardised Marketplace for buying and selling art. Artprice is preparing its blockchain for the Art Market. It is BPI-labelled (scientific national French label)Artprice's Global Art Market Annual Report for 2017 published last March 2018: https://www.artprice.com/artprice-reports/the-art-market-in-2017

Discover the Alchemy and the universe of Artprice http://web.artprice.com/video, which headquarters are the famous Museum of Contemporary Art, the Abode of Chaos:

The Contemporary Art Museum The Abode of Chaos on Facebook: https://www.facebook.com/la.demeure.du.chaos.theabodeofchaos999