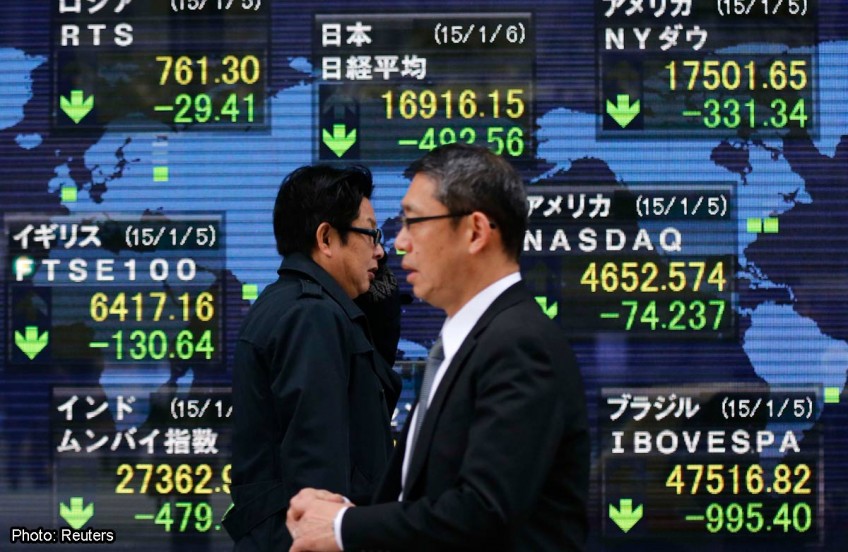 TOKYO - An index of Asian shares erased its early gains on Tuesday after a measure of Chinese factory activity unexpectedly skidded to an 11-month low.

The flash HSBC/Markit Purchasing Managers' Index (PMI) dipped to 49.2 in March, below the 50-point level. Economists polled by Reuters had forecast a reading of 50.6, slightly weaker than February's final PMI of 50.7.

MSCI's broadest index of Asia-Pacific shares outside Japan .MIAPJ0000PUS was down about 0.1 per cent.

The private survey signaled persistent weakness in the world's second-largest economy that is likely to add to calls for more policy easing from Beijing.

"A renewed fall in total new business contributed to a weaker expansion of output, while companies continued to trim their workforce numbers," Annabel Fiddes, an economist at Markit said.

The Shanghai Composite Index .SSEC, which has recently pushed to seven-year highs, sagged 0.3 per cent in early trading. Japan's Nikkei stock average .N225 slipped about 0.5 per cent, pulling away from the previous session's 15-year highs.

The US dollar edged slightly higher on the day, but still remained well off its recent highs as investors bet that the US Federal Reserve will stay its hand on hiking interest rates in the months ahead.

Underscoring that the long-term view remains intact but the near-term is unclear, Fed Vice Chair Stanley Fischer, the central bank's second-in-command, said on Monday that the Federal Reserve is "widely expected" to begin raising interest rates this year though the policy path remains uncertain.

Fischer said the stronger dollar and weaker oil prices figure in US policymaking, but said the central bank is "trying to look through those phenomena."

The dollar plunged last week after the Fed cut its inflation outlook and its growth forecast. The market consensus is that the Fed will hold off raising rates until at least September, rendering short-term directional bets difficult to make.

The dollar was up 0.1 per cent on the day against its Japanese counterpart at 119.80 yen JPY=, but remained well below Friday's session high of 121.20 and levels above 122 yen touched earlier this month.

The euro got a lift against the dollar on Monday after European Central Bank President Mario Draghi said he expected consumer prices to rise gradually by the end of the year even if they might remain very low or negative in the months ahead.

Some market participants took this as a sign that the ECB might wrap up its bond-buying scheme early, though Draghi said it intended to carry out purchases at least until end-September.

The weaker dollar lent support to dollar-denominated commodities, though some investors took profits on recent rallies. US crude futures CLc1 edged down about 0.4 per cent to $47.28 a barrel after soaring 1.9 per cent in the previous session.