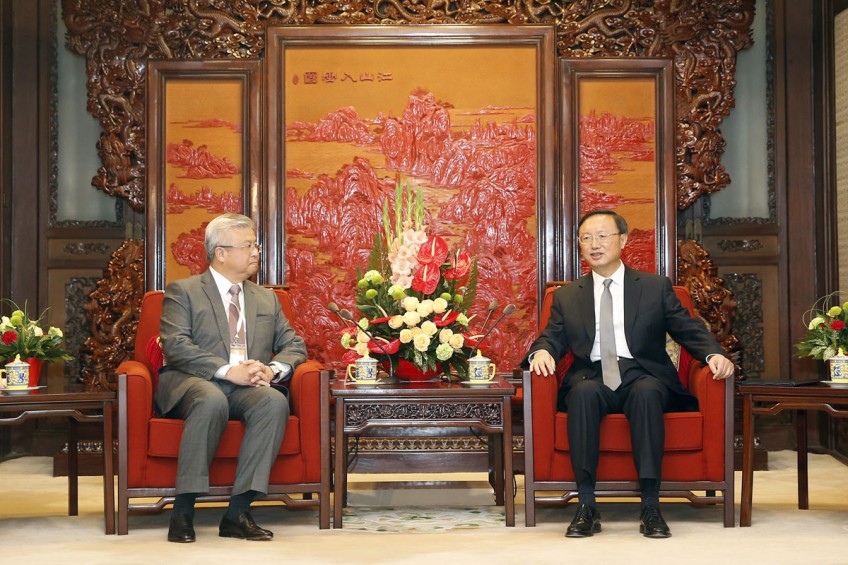 Singapore's ethnic Chinese businessmen have made important contributions to bilateral trade and economic ties, China's State Councillor Yang Jiechi told a delegation from the Singapore Chinese Chamber of Commerce and Industry (SCCCI), as he urged them to continue doing so by supporting Beijing's drive to revive two Silk Road trading routes.

"We hope Singapore's Chinese business elite will use their talent and take part actively in the 'One Belt, One Road' initiatives as contribution to the Sino-Singapore friendship and co-operation," Mr Yang said at yesterday's meeting held at the Zhongnanhai compound in Beijing, where top leaders are based.

He also expressed China's respect for the "commendable" contributions of Chinese organisations in Singapore in resisting the Japanese during World War II.

The 28-member SCCCI delegation is on a five-day trip, which began on Sunday, to mark 25 years of Singapore-China diplomatic relations and to explore opportunities from the Silk Road initiatives.

Meetings with the China Council for the Promotion of International Trade and the All-China Federation of Industry and Commerce are scheduled.

The trip includes a networking seminar and dinner hosted by the Bank of China and a visit to the Sino-Singapore Tianjin Eco-City, the second flagship bilateral project after the Suzhou Industrial Park.

The SCCCI delegation was scheduled to meet Executive Vice-Premier Zhang Gaoli yesterday, until a last-minute change on Sunday. He was likely to have been the first member of the apex Politburo Standing Committee to meet an SCCCI delegation in China.

The SCCCI organises visits to China yearly but this trip is its highest-level ever, comprising 15 of its 56 council members and head honchos from listed firms.