To be the Big Dipper that Shines among Numerous Stars, Ordos Creates a New Lighthouse of the Cultural and Creative Industry

BEIJING, Sept. 27, 2017 /PRNewswire/ -- On September 24, a list of cultural and creative items were recognized for the"Big Dipper Award" created by Ordos, Inner Mongolia. As an important accomplishment of the 2nd Ordos International Conference for Culture & Creativity (referred to as "OICC II"), it not only honored numerous domestic and foreign cultural masters and creative talents present at the conference, but also highlighted the economic transformation of this resourceful city.The conference was jointly organized by the China Internet Information Center and the municipal government of Ordos. 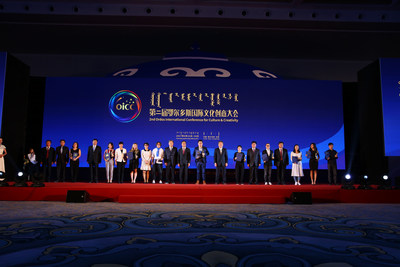 Embracing the Spring of Culture and Creativity, Contributing to the Rejuvenation of the Country

In the past, there were many misunderstandings about "cultural industries". The success of OICC II represented yet another radical reform of cultural system. A large number of domestic and foreign experts and scholars stressed during the two-day forum that a cultural industry does not mean "industrialization of culture". Instead, it is an industry of commodities relating to production, sales and human psychological consumption. It can be said that the essence of a cultural industry, with creativity as the fundamental means, cultural content and creative results as core value, and intellectual property or consumption as transaction characteristics, creates social wealth and promotes social progress and the people's overall quality.

In a speech of the opening ceremony, Wang Qiguo, judge of Big Dipper Award and a researcher of Institute for Cultural Industries, Peking University, specifically pointed out: "The cultural industry represented the 1.0 Era, while the cultural and creative industry is the 2.0 Era. Chinese economic society is urgently seeking new impetus for sustainable development today. Networks provide us with another path, which solves quality problems. It brings competitiveness and high added value. 'Internet+' and 'Culture and Creative+' are promoting the rise of China. When the two pillar industries rise to new heights, the country can take off and maintain great power!" This opinion also shows the consensus shared by the new generation of cultural and creative workers in China. Just as the well-known management scientist Peter Drucker once said, "What promotes economic development is not Fortune 500. They only decide the media headlines. It is unknown start-ups and SMEs that account for the largest proportion of GDP; what really promotes social progress is not the few star-like CEOs, but the people who are working silently."

On the fringes of OICC II, a Role Creative Carnival was successfully held, with numerous original IP works displayed. The down-to-earth and popular interactive activity was a highlight of the overall event. For many cultural and creative new talents, their dream is to build a platform of happiness and mutual exchanges. Besides, with the support of the newly-launched Fund, it will be easier to recognize and promote good creativity and works. It will definitely contribute to the blossoming and prosperous development of the Chinese cultural and creative industry, enabling Ordos to embark a path of sustainable development with transformation and upgrade.

Integrate into the "B&R" Initiative, Promote Common Development of the Region

Ordos was a hot spot of the thousand-year Silk Road. Over many centuries, the land witnessed cultural and economic integration and development; also, Ordos is an economic center on the extension line of North Xinjiang as the Belt and Road  Initiative specifies. Its breakthrough in the cultural and creative field is also a response and a trigger for a "B&R" cultural and creative boom.

Ordos is a latecomer as well as forerunner. It can inherit the achievements of many brother cities. Moreover, it actively comprehends the value and significance of culture and creativity in promoting regional economy of the B&R. Quite a few of the OICC II topics focused on discussion of the ties between culture & creativity and economic growth, such as speeches of Culture & Creativity and "B&R" Practice, Cultural and Creative Development in Pakistan, Culture & Creativity Leads Ordos to Pursue Profound Economic and Social Changes and Culture & Creativity and the Realization of Innovative Strategy of Dongsheng District.

The whole event represented a magnificent chapter of the city's cultural and creative industry. Its opinions, works and achievements will take more time to be absorbed and promoted.