LAS VEGAS, Jan. 16, 2019 /PRNewswire/ -- Bell Education Group recently attended the 2019 International CES.  As one of the leading educational companies in China, Bell was eager to display its new product line. Combining AI and education, its STEAM-focused Mabot, Wingbot, and Thunder were unveiled.

Featured at the display was the Mabot theme park, which won not only the attention from attendees, but also the CES Innovation Awards. It's also a recipient of the prestigious G-Mark Design Award. 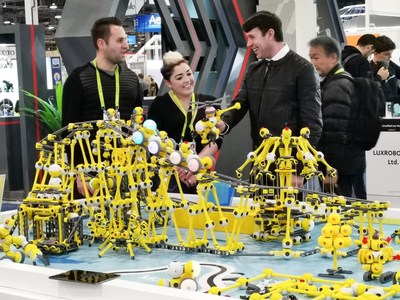 Mabot is a modular, reprogrammable robot with infinite possibilities! Kids can create any robot they can imagine. The ergonomic spherical design is easy to assemble and re-assemble into thousands of combinations. Plug and play connectors and sensors make it easy to make a smart creation. Added compatibility with Lego-type building blocks expands the potential.

Mabot's innovative building and programming design has created a new standard in the field of educational products.  The fun, easy, and intuitive play pattern sparks children's imaginations and awakens them to the world of robotics.

The Mabot amusement park became a major attraction at the CES.  Circuits, sensor and motor modules were combined to create a miniature world complete with roller coaster, Ferris wheel, and other rides. Mabot's sensors were programmed to interact with attendees and activate the system with just the wave of a hand. In a single day at CES, the Mabot coaster completed the track over 2,700 times, covering a distance of nearly 15 kilometers!

Also on display was the metal-framed robotic kit 'Rebot' as well as an educational drone -- 'Wingbot'.  These items demonstrated Bell's core principle of AIQ

AIQ (Artificial Intelligence Quotient) was first developed by the founder of Bell Education Group Wang Zuobing, and refers to the cooperation and competition between humans and AI algorithms. The index is composed of elements of creativity, learning, communication, and data.  It's intended as a standard to measure adaptability to the future world.

Bell Education Group has distributed its products to more than 30 countries and has established programs with hundreds of schools and educational organizations in the US and EU.  The products have been widely used in STEAM curriculums in the classrooms, as well as at home.

Bell continues to expand its distribution worldwide with the sincere hope that children everywhere can access high-quality learning products and services.  These intelligent hardware products and STEAM curriculums will help kids prepare for the future world of AI with confidence.

Shenzhen Bell Creative Science and Education Co., Ltd. (Bell Education Group) is the largest and most diverse creative science and education group in China.  It is also the only vertically-integrated education group, covering the range from online courses, to smart product development. Since its founding in 2011, Bell has focused on education for kids aged 3-13 and trained them to be ready for the new world of AI.