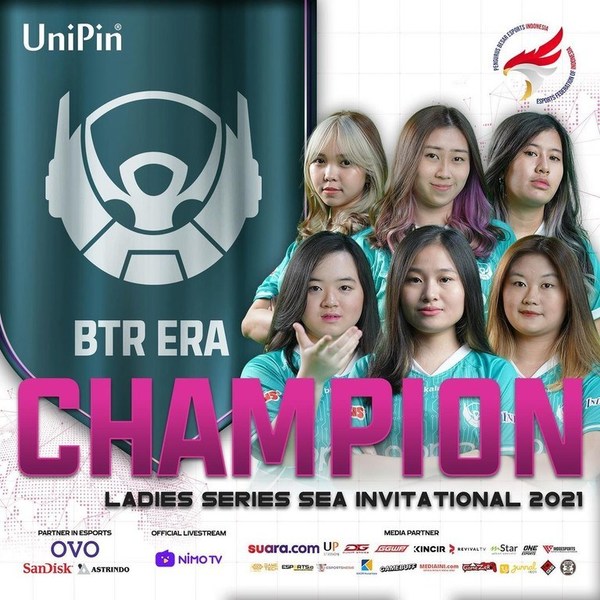 After six days of fierce battle from November 15th, Belletron ERA wrapped up Ladies Series Invitational playoffs with a solid score of 3-0. Belletron ERA's strong performance was not a surprise in the first place. Their superiority has been shown since the group stage, dominating other four teams such as GPZ Basreng, LVD Huntress, Rose Ophelia and Please Sponsor Us by racking up all the winning points.

The Thailand representative, IDNS WINX finished at number three in the A group, went to the lower bracket for the playoffs stage. Encountered with Rose Ophelia on Thursday (18/11), IDNS WINX had to give up earlier with a final score 1-2 .

Meanwhile, another tournament final has also concluded the UniPin SEACA 2021. SEACA MAJOR held its final stage on Sunday (21/11). A total of 32 teams have fought their way to the grand final since 19th November. This season's SEACA introduced two categories, public and ladies, for the first time.

Through the ranking system, SEACA MAJOR public category is dominated by Indonesian teams, Boom Esports and Gspace Commander in the first and third place, respectively. The second position was filled by RSG from Malaysia with a slight difference in points. Meanwhile, the Thailand team, Valdus Eufrosine, conquers the ladies category with a total 85 points.

The final match of SEACA MAJOR 2021 can be streamed online at seacaexpo.com. The live streaming will also be available in Bahasa Indonesia and English by selected casters such as Pasta, Jelly, El Doge, Om Wawa, Debora Chen, Clara Mongstar and Wilson.