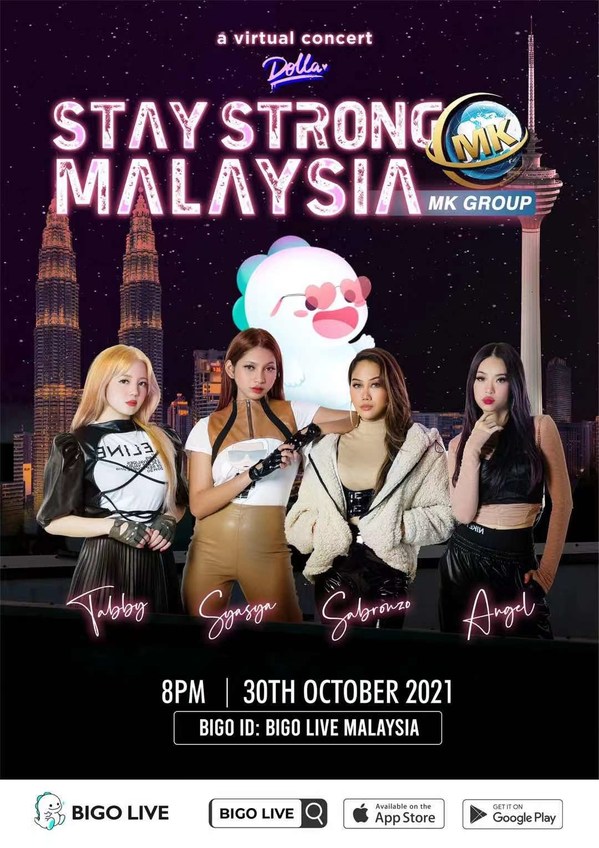 The upcoming 'Stay Strong Malaysia Virtual Concert', which also doubles as a charity fundraiser, will see DOLLA performing some of their top hits including new single 'Berani'. As Malaysia undergoes multiple Movement Control Orders (MCOs) and waves of infections, the spread of the virus has caused a considerable stretch on the local healthcare system. The 90-minute-long concert hopes to spread awareness and raise funds to purchase medical supplies for hospitals and support medical frontliners who work tirelessly battling COVID-19.

Prior to the virtual concert, DOLLA will be participating in an exclusive media interview that will be livestreamed on the Bigo Live app. During the interview session, fans and viewers may submit their questions and the girl group will pick five questions from viewers which will be answered during the interview.

Fans and viewers can also look forward to special giveaway events happening between now and 30 October, where 40 limited edition posters and 3 specially autographed posters will be up for grabs. Fans may visit MK Group's Facebook page to participate in the poster giveaway. Additionally, fans and viewers can stand a chance to win one of 50 VIP meet-and-greet passes for a special fan interaction session with DOLLA. Interested parties may participate by filling up this form here.

Since their debut in 2019, the group has been known for their first single 'Dolla Make You Wanna' in March 2020 which has over 4.2 million views on YouTube, followed by the highly popular 'Impikan' with 5.1 million views. Their newest single, 'Berani' was released on 24 September to positive reception. Most recently, the group received international recognition when they were featured on Spotify's New York Times Square Billboard as part of the streaming platform's EQUAL campaign which aims to foster equity for women in audio and nurture equity by presenting female artists around the world.

"Bigo Live Malaysia has always been supportive of the local community and have created various initiatives to provide pan-entertainment options for Malaysians to enjoy at home while complying with MCO guidelines," a Bigo Live spokesperson said.

"As homegrown talents who have received much recognition both domestically and internationally, it is our privilege to have DOLLA onboard our platform to host their 'Stay Strong Malaysia Virtual Concert'. Our hope is that through these efforts, we can bring positivity and delight to fans and simultaneously, receive good response to the fundraising efforts for the public healthcare system," a Bigo Live spokesperson added.

Bigo Live strives to become the go-to source for interactive and engaging entertainment, and such engagements are part of Bigo Live's efforts to provide exclusive opportunities for the community to interact with their favourite local celebrities despite social distancing measures in place. DOLLA joins the ranks of other regional and global celebrities such as Baby Shima, Cik B, K-Clique, Isa Isarb, Benjamin and Narelle Kheng, and Lawrence Wong among many others, who similarly took to Bigo Live to bring positivity, hope and joy to users around the world.

Bigo Live is one of the world's fastest-growing livestreaming social communities where users broadcast in real-time to share life moments, showcase their talents and interact with people from around the world. Bigo Live has around 400 million users in over 150 countries and is currently the market leader in the livestreaming industry. Launched in March 2016, Bigo Live is owned by BIGO Technology which is based in Singapore.