Boston Welcomes the City of Longquan in Celebration of the 40th Anniversary the Establishment of China-U.S. Diplomatic Relations

BOSTON, June 09, 2019 /PRNewswire/ -- In the morning of June 9th, 2019, the 40th Boston Dragon Boat Festival took place on the North bank of the glinted Charles River. More than 76 dragon boat teams participated in the game. Dozens of boats heatedly competed with one another on the River, surrounded by audiences from all over the world. This year also marks the 40th anniversary of the establishment of China-U.S. diplomatic relations, extending the significance of the dragon boat festival event. 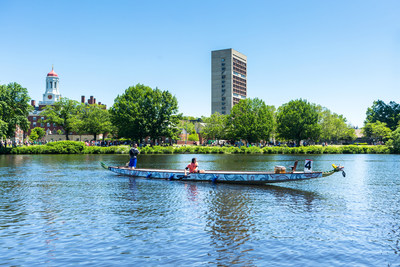 The dragon boat donated by longquan

At 12 pm, Excellency from the City of Longquan of Zhejiang Province arrived at the Charles River bank to prepare for the "Eye Dotting" ceremony for the racing dragon boat. The representative of Longquan Municipal People's Government Mr. Zhuge Chunjie donated a dragon boat named "Tian Xia Long Quan (Longquan Goes Global)" to the dragon boat organizing committee, while also presenting a plaque with "Tian Xia Long Quan (Longquan Goes Global)" engraved. Zhuge Chunjie suggested in the remarks that he hoped to strengthen the friendship between Longquan and Boston, focus on cooperation, create mutual benefit and win-win situation for both cities, and deepen regional cooperation and enhance international exchanges. He also wished to promote Longquan culture to go outbound through the cultural exchanges of dragon boat, while tightening the China-U.S. friendship bond. 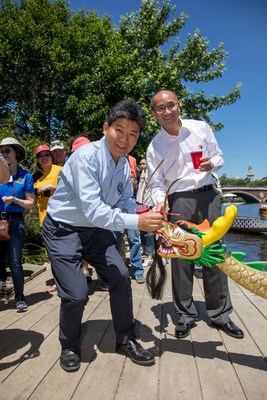 Eye dotting for the dragon boat

The Duanwu Festival, also known as the Dragon Boat Festival in the West, is a traditional holiday originating in China. On the day of the festival, the dragon boat race, a traditional Chinese competitive sport, was held in paddled long boats, each ornamented with a dragon's head at the prow. Cultural communications and exchanges have become borderless nowadays; therefore, people are able to enjoy the dragon boat races that symbolize the traditional Chinese culture on the Charles River in Boston. Longquan dragon boat, commonly known as the "Chinese boat", has a long and rich history of more than 800 years. In 2012, it was listed as one of Lishui's city-level intangible cultural heritage masterpieces, a signature art form among the Longquan folk art. Through participating in this event and donating the dragon boat, Longquan has "built friendship and affection via gifting" and better communicated the "dragon" spirit in Chinese and Longquan culture to the rest of the world. Along the beautiful banks of the Charles River, Longquan has built bonds with contestants, distinguished guests and onsite audiences from all over the world by promoting Chinese culture and telling Chinese stories to deepen the cultural exchanges and understanding among countries and regions.