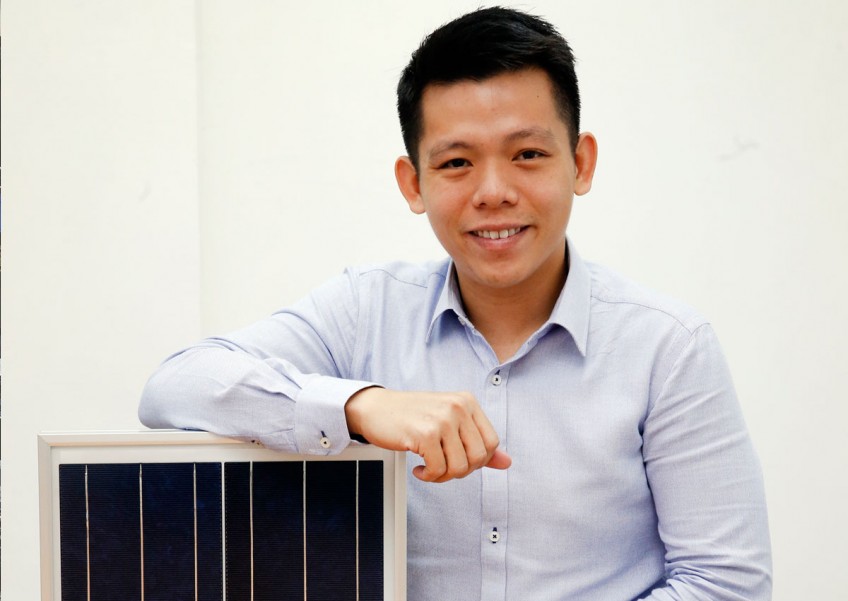 Mr Khor says the firm expects to be operating 100 mwp of solar assets by the end of the year, way up from the 30 mwp now.
The Straits Times

In just two years, local solar company Cleantech Solar has become one of the biggest solar rooftop developers in Asia, counting big-name corporates such as Coca-Cola and Apollo Tyres among its clients.

The firm has 35 employees today, up from the three it started out with.

Its head of engineering and procurement Alan Khor believes there are more ways for the company - and the sector - to take off. It expects to be operating 100 mega watt peak (mwp) of solar assets by the end of the year, well up from the 30 mwp now.

"Growth prospects are tremendous in South-east Asia. We are dealing with a combination of fast-growing economies with resulting investment in manufacturing infrastructure, rapid growth in electricity demand and in general good solar resource," Mr Khor tells The Straits Times.

"So we do expect to see rather explosive growth in demand going forward."

Indeed, Singapore's burgeoning clean energy industry is poised for growth, especially as Minister for Trade and Industry (Industry) S. Iswaran has said more will be done to develop the sector, including extending the use of government lead demand and building capabilities in research and development.

As the global energy utility landscape continues to evolve, the renewables energy industry in Singapore has also grown - and at whirlwind speed.

Mr Iswaran noted at the recent Committee of Supply debate that the clean energy industry here has grown from a very small base of about 10 firms in 2007 to around 100 last year.

The Government will extend the use of lead demand to help locally based clean energy companies build their track record and pursue regional opportunities, he added.

In addition, the Government will continue building capabilities in research and development, new renewable energy and energy management technology, and financing for the sector.

These efforts could potentially create 2,000 new professional, manager, executive and technician (PMET) jobs in the clean energy sector by 2025.

In the solar energy sector alone, Mr Khor has also seen marked changes. For example, when he returned from Europe to work here in 2011, installing solar systems simply did not make commercial sense as the cost of electricity from solar energy was substantially higher than electricity from the grid.

But thanks to recent breakthroughs in technology, solar electricity today is about 80 per cent cheaper than electricity from the grid - much more affordable for companies and households alike.

The total installed capacity of grid-connected solar photovoltaic (PV) systems in Singapore has swelled from just 0.4 mwp in 2008 to 125.7 mwp in the fourth quarter of last year, according to data from the Energy Market Authority.

The growth of the solar energy sector has not been without bumps.

An overcapacity in gas, together with the oil price downturn, has led to lower and even negative margins, notes Dr Matthew Peloso, chief executive and founder of solar energy firm Sun Electric.

The liberalisation of the electricity market, set to kick in by the second half of next year, has also doubled the retail participants in the market - with some competitors utilising unsustainable pricing in a bid to grab market share, he adds.

But Dr Peloso, like other industry players and analysts, believes that prospects are bright for the sector, particularly in the region.

Ms Georgina Hayden, head of power and renewables at research firm BMI Research, notes that the number of residential solar systems being deployed across Singapore has continued to rise notably.

This is as solar technology becomes increasingly cost-competitive and consumers are provided greater flexibility with financing installations.

"As such, our outlook for the rooftop solar market in Singapore is optimistic, and we expect strong growth in the segment over the next decade," she says.

But he adds: "The potential of solar developments will still be limited by land constraints."

Indeed, for solar companies, the bigger opportunity lies in the regional markets.

Solar leasing company Sunseap Group, for instance, already has a presence in Singapore, Cambodia, Thailand, the Philippines, India, Malaysia and Australia, and plans to move into other new markets in the coming years.

"There is great potential for solar in the region, especially in rural areas," says the firm's director Lawrence Wu.