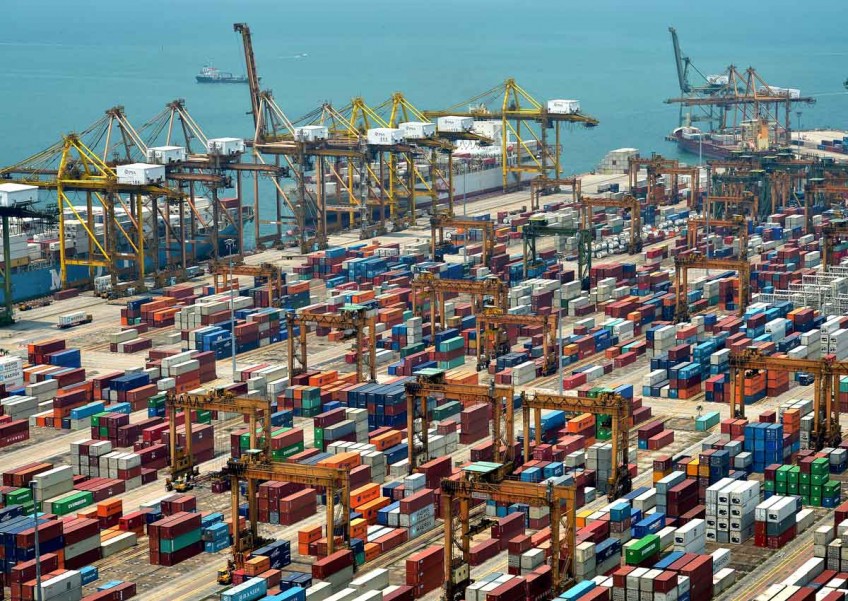 Non-oil domestic exports are expected to rise by 6.1 per cent in 2017, much stronger than the 0.3 per cent forecast earlier.
ST file photo

A TWO-SPEED economy has emerged in Singapore, going by the latest survey among private-sector economists, the results of which were released on Wednesday.

At least for now, they agree that external-facing indicators are strong enough to warrant their revising growth rates upwards from the previous survey.

They also agree that domestic-oriented indicators are weaker, as reflected by the weak labour market data, also released on Wednesday.

But even as they agreed on the growth dichotomy, they were divided on how broad-based growth can be.

Mizuho Bank economist Vishnu Varathan said of the survey results: "The risks at the margins have diminished, but domestically, there has been some disappointment."

In the survey conducted by the Monetary Authority of Singapore (MAS) in mid-February, private-sector economists said the Singapore economy will grow by 2.6 per cent in the first quarter of 2017, and 2.3 per cent for the whole year.

MAS said that from the 23 responses collected, the economy is likely to grow by between 2 and 2.9 per cent this year, above the earlier 1 to 1.9 per cent range.

The quarterly survey offers more of an overview of where private-sector economists see the economy heading and how they arrive at their conclusions, rather than an indication of where the economy might be headed.

Even so, the strength in the upward revisions between the last MAS survey and the latest one indicates the soundness - and unanimity - of their near-term optimism.

Wednesday's 2.3 per cent full-year growth for 2017 was the first upward revision for the year since the survey respondents first forecast the number in March 2016.

Economists that The Business Times spoke to attributed the strong upward revision in the March 2017 survey to better external prospects for Singapore's trade-reliant economy.

Not only is China's growth on a more stable footing, the new US administration's promise of fiscal stimulus has also encouraged investors.

Non-oil domestic exports are therefore expected to rise by 6.1 per cent in 2017, much stronger than the 0.3 per cent forecast earlier.

Manufacturing is among the sectors to ride this wave. With it posting surprisingly strong growth late last year, the survey respondents expect the momentum to carry into this year.

The sector accounts for much of the upward revision in the March 2017 survey. Respondents now expect the sector to grow by 4.5 per cent this year, up from the 1.1 per cent growth predicted in the December 2016 survey.

Nomura economist Brian Tan said: "Demand for Singapore's manufacturing output is also reflected in a lot of the Asian economies' data, so it looks now that the sector's growth has legs, and it can be sustained for a while."

In contrast to the stronger numbers for the external-facing segments, respondents in the March 2017 survey toned down their expectations for domestic-facing segments.

But even as respondents noted the diverging trends in Singapore's economy, they also had diverging views on how long the growth may last.

In the absence of better broad-based numbers, Nomura's Mr Tan was sceptical about the sustainability of the manufacturing-led growth.

"Manufacturing employment numbers have come down, so the strong sectoral data doesn't look like the kind of thing that is a natural outcome of stronger growth," he said.

But DBS economist Irvin Seah was more sanguine. He predicts that the spillover from the stronger segments into weaker ones will occur this year.

Pointing to Wednesday's labour market data that showed higher unemployment and layoffs, Mr Seah said that it may point towards a bottoming out of labour-market woes.

"It's a lagging indicator," he said, adding that manufacturing growth will soon lift the labour market, which is a second-degree indicator. The retail and food-and-beverage sectors will then benefit as workers are more confident.

"The strong showing in the manufacturing sector is an initial sign of stronger growth."

This article was first published on March 16, 2017.
Get The Business Times for more stories.