BEIJING, Jan. 16, 2018  /PRNewswire/ -- Cheetah Mobile Inc. (NYSE: CMCM), a leading mobile internet company with strong global vision, recently held its 2018 CM Global Designer Meetup at the Cheetah Mobile headquarters in Beijing to honor the top designers on CM Design, an open platform that empowers third-party designers to earn money by creating downloadable themes for CM Launcher and Cheetah Keyboard. Nearly 100 designers from 10 countries attended the event, where they listened to speeches by Cheetah Mobile executives, learned more about CM Launcher and Cheetah Keyboard, and received awards for their outstanding performance on the CM Design platform in 2017. 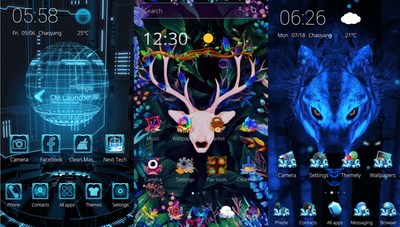 Established in 2015, CM Design has quickly developed into a popular venue for some of the world's top up-and-coming graphic designers. Through the platform, Cheetah Mobile is cultivating a growing community of highly talented individuals and teams from around the world, capable of responding to the latest trends and bringing users the themes they want.

"We are building a robust system to connect designers and users," said Edward Sun, SVP of Cheetah Mobile. "Not only does CM Design provide freelance designers with an easy-to-use platform to earn money, our crowd-sourcing model also benefits users, as they are given access to a massive collection of stunning themes to personalize their mobile experience."

Nearly 3,000 designers and 100 design studios from over 50 countries are currently active on the CM Design platform. Together they designed more than 20,000 themes for CM Launcher and Cheetah Keyboard in 2017, with total downloads exceeding 200 million. Individual designers earn up to $15,000 a month designing themes for CM Design, while design studios earn up to $60,000 per month. More than 30 freelance designers have leveraged their success on the platform to establish their own design studios. As a whole, average revenue for designers was up 40% in 2017.

"I have long tried to make a career as a freelance designer, and thanks to CM Design, this dream has become a reality," said Evgeniy Popik, an independent designer. "I have grown mentally and developed my creative potential, and this is of great importance to me."

The Top Ten individual designers and design teams of 2017 were announced at the event, with each winner receiving a set of impressive prizes. The top designers were judged based on the number of themes they created during the year, the quality of their themes, and the number of times their themes were downloaded by users.

If you are interested in joining CM Design, please visit launcher.cmcm.com

The world's leading personalization app for Android, CM Launcher offers thousands of 3D themes, wallpapers and other customization options. Covering more than 200 countries and regions, it has ranked first in the personalization category of the Google Play store in 95 countries with nearly 300 million total downloads. CM Launcher was recently ranked #1 in the overall free app rankings on Google Play in the United States.

Cheetah Mobile is a leading mobile internet company with strong global vision. It has attracted hundreds of millions of monthly actively users through its mobile utilities products such as Clean Master and Cheetah Keyboard, casual games such as Piano Tiles 2, and its live streaming product Live.me. The Company provides its advertising customers, which include direct advertisers and mobile advertising networks through which advertisers place their advertisements, with direct access to highly targeted mobile users and global promotional channels. Cheetah Mobile is committed to leveraging its cutting-edge artificial intelligence technologies to power its products and make the world smarter. It has been listed on the New York Stock Exchange since May 2014.

For more information about Cheetah Mobile and its products, please visit www.cmcm.com