BEIJING, Sept. 30, 2017 /PRNewswire/ -- Recently, the British TV station Sky UK reported a piece of video news that showed that there was a huge problem of illegally using Child Labour in the mining industry, especially the cobalt ore industry, in DR Congo. Many Chinese enterprises located in DR Congo were involved in the problem. After the news was released, it led to a public outcry, and DR Congo got the world's attention once more. In the middle of June this year, in DR Congo, Z.J.OMNIMEDIA issued a report for the problem of child labour with Chinese enterprises locates in Congo. The following is the original text of this report:

Is there Child Labour in DR Congo?

In the mining industry in DR Congo, cobalt ore occupies the majority. Li Li, the associate research fellow of the Institute of International Economy of the University of International Business and Economics and the director of the Technical Trade Measure Research Center, told "The latest data shows that DR Congo is the main source of cobalt. The cobalt output of Congo occupies over 70% of the output of the world." Therefore, the development of cobalt ore industry becomes an epitome of the economic operation in there, and it also drives every link in relative and upstream-downstream derivative industries. However, the Child Labour problem in those links has become a focus of the world and it receives a lot of criticism. 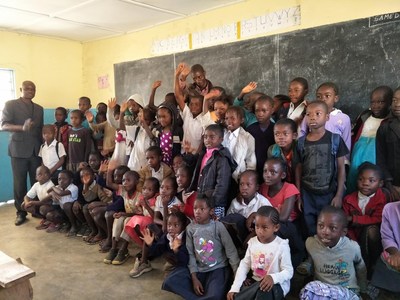 Edyrem, a mining expert in DR Congo, said the government of DR Congo has prohibited hiring child labourers. "Actually, there is mining police sent by the government to guard every digging. If children go near, the police would stop them. It is impossible to have children working in mines."

The repeated orders and strict supervision measures of the government of DR Congo had done much in management and regulation upon Child Labour problems, but it could not eradicate them. Now, some diggings are still hiring child labourers. What needs to be discussed is the proportion that those diggings occupy of all the diggings in DR Congo.

In 2016, Amnesty International published a report naming The Truth of Working to Death: The "Driving Force" of the Cobalt Ore Trade of the World Comes from Abusing Human Rights in the Territory of Democratic Republic of the Congo. The report says, "Researchers from Amnesty International Organization and African Resource Observation Organization interviewed 17 boys and girls that were engaged with exploiting, gathering, and processing cobalt ore in Kolwezi and Kambove. The youngest of them was only 7 when he started working in the mine. All of them except one are working on the ground. They are either gathering minerals from tailing heaps in privileged industrial diggings that are or has already stopped operations, or cleaning ores in the rivers or lakes near privileged diggings. One of the boys said that he also did underground mining."

The report released by the United Nations Children's Fund in 2012 also shows that there are about 40 thousand child labourers working in the mine field, and their daily working hours are mostly over 12 hours.

We never accept ores gathered by child labourers. But we can do nothing if those ores go to other collectors," said the responsible person Liu Fujian of Jiangzhi warehouse. Jiangzhi warehouse is an ore collecting warehouse inside  DR Congo. That means it is an ore collecting spot that is equivalent to a place of purchasing. "Diggings are in charge of mining, and we purchase those minerals. That is the approximate logical relationship," the responsible person Liu Fujian said.

All the evidence shows in different dimensions that Child Labour phenomenon truly exists in  DR Congo and it can never be ignored.

Are China-invested enterprises involved in it?

The unique geographic position and industry agglomeration of DR Congo makes it have frequent industry tie-ins and resource interchange with China. Li Li said that for cobalt industry, relative industry cooperation mainly refers to the application of cobalt. "There are reports saying that 80% of cobalt is used in the battery industry, including mobile phone batteries, new energy automobile, and others. The output of cobalt in China is not much, so it mainly relies on import. One of the important origin countries is DR Congo. Some reports say that over 90% is from DR Congo. In such cooperations, China mainly acts as a "second transmitter", "we import huge amounts of cobalt ores and process it to batteries, then sell to other countries and provide to the downstream of the supply chain," Li Li said.

Then, were those Chinese enterprises in DR Congo involved in Child Labour transactions?

However, the cobalt industry and other mineral industries are the only businesses that Chinese enterprises have in DR Congo. Richard Muyej Mangeze Mans thinks that, take Lualaba Province as an example, Chinese enterprises contributed to help the province build public road, and also gave a lot of help using advanced technology and facilities to Lualaba on many big national projects. "For example, we just finished a meeting with La Sino-congolaise des Mines S.A. and they said they would help Lualaba Province do other constructions, including roads, water and electric stations, hospitals, and schools, etc. Those projects are predicted to be finished in one or two years."

"The development plan and goal of Chinese enterprises in Lualaba Province is an epitome of relevant conditions in the DR Congo. The ambassador of China in Congo visited Lualaba not long ago. I also told him the contributions that Chinese enterprises did here. DR Congo has a very good relationship with China. The reason that the policy that DR Congo published can be executed quicker is much because of the help from Chinese enterprises. Those Chinese enterprises are the cooperative partner of DR Congo, we need to make sure they can do their business successfully in our country." Richard Muyej Mangeze Mans is very confident.

Poverty is the root of the problem

What is the root cause of Child Labour problem in DR Congo?

In DR Congo, a lot of people are still fighting for food and clothing every day. "My farm is co-founded with Huayou Company and Zhejiang University in China, mainly in vegetable cultivation, fruit cultivation and animal husbandry products processing and processing-based. The farm has helped about 120 people to get a job." A farmer Richard in DR Congo aid. Even so, it's only a drop in the bucket, there still exists a lot of poverty in DR Congo, and it needs much time to develop economy.

In the eyes of Li Li, an associate researcher at the Institute of International Economy of the University of International Business and Economics and director of the Center for Technical Trade Measures Research, the root is "poverty". "This poverty comes from two aspects. The first reason is the poverty of DR Congo, which directly leads to inadequate investment in the field of compulsory education in DR Congo, which has also created difficulties for children to attend school; the second reason is poverty from the Child Labour's families in DR Congo. Amnesty International's report has mentioned that many families are unable to support the tuition for their children under survival pressure; so many children are required to earn their tuitions while working. So the poverty is the root cause of Child Labour problem."

Liang Xiaohui, the deputy general economist of China Textile Information Center and international problem expert, believes that the root cause of Child Labour in DR Congo is mainly due to the failure of national governance, which is closely related to the historical development of DR Congo. "In the view of history, there are several issues that are still important. Firstly, the lengthy time of colonization led to the plundering of local resources, but it was important to establish a sufficient system. After the colonial era, the DR Congo was caught in Ethnic Conflict, and did not establish a social consultation and coexistence mechanism, that is, the system of social common governance, which led to Ethnic Conflict, corruption, and the government could not operate for a long time, and finally, the vulnerable groups cannot get the ultimate protection such as children. From the macro-venation of world history, the vacuum of national power caused by colonization has led to struggles among different ethnic groups and it has continued to these days, and this historical legacy has been integrated into the global system by a lot of multinational corporations, so that enterprises cannot have their own right to speak," Liang Xiaohui said.

At the enterprise perspective, firstly, it is possible to create opportunities for solving the problem of child labour through the optimization of commercial contracts."After the emergence of the child labour problem, in order to get rid of suspicion, many commercial brands directly said that they do not use cobalt produced by Child Labour in DR Congo, but if so, those children still have no other source of income. These children may wish to keep their life through the income of cobalt, and if the road does not work, it cannot solve the incident from the root cause. But, if the enterprises could optimize the terms of the contract on the basis of maintaining the existing commercial contract, add some appropriate regulatory measures in the contract to help the Congo (Kung) children's family to improve life and education, it will be able to gradually resolve this problem," Li Li said.

Next, the enterprises that invested to local places in DR Congo should also actively assume the corresponding responsibility and be aware of their responsibilities to respect some rights of the local people, "This naturally includes the right of local children to develop in the future, it means that these children should not enter the labor market and digging, they should not engage in such heavy work and be the Child Labours who have unsound intelligence, spirit and body. If the enterprises are responsible, it is necessary to take full account of the risks of Child Labour in the supply chain and in the operational relationship. And then come up with specific measures to prevent and treatment," Liang Xiaohui said.

From the level of national comprehensive governance, it should be improved from two directions. Firstly, it is the duty of the nation to protect, and the nation remains the first person responsible for human rights obligations, "As the failure of the national governance mentioned before, it will inevitably lead to the occurrence of Child Labour, the nation must protect its children and provide them with human rights obligations like educational opportunities, this is its duty to these children," Liang Xiaohui said.

Secondly, the nation should formulate policies to help those children to participate in the education system, so that children leave the original harsh working environment and get more growth opportunities, "This is the usual responsibility for relief or rescue, and it is the nation's protection obligations that bear the brunt. If the protective measures are perfect, there will be no Child Labour naturally. To give a very simple example, it is difficult for you to find child Labour in Beijing or Shanghai, children who have registered permanent residence in Beijing will not be Child labourers, because the government has a very good protection mechanism, and also have sufficient educational resources, parents of these children will not let them enter the labor market to earn money to support the family."

"These measures have helped to solve the conflict between the industry and commerce and the human rights in DR Congo, and to disperse the 'haze of Child Labour' in DR Congo," Liang Xiaohui said.