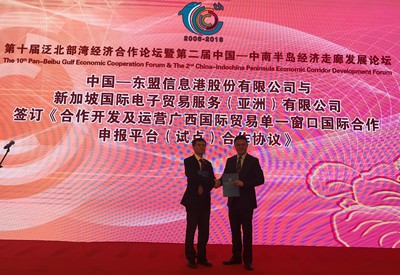 With 139.6 million tons of cargoes imported (valued at 10.62b RMB) and exported (valued at 18.59b RMB) from Guangxi's Customs borders and three major ports (Beihai, Fangcheng and Qinzhou), the volume of trade declarations is growing exponentially. Guangxi is looking to make it easier for traders to automate declarations, enabling more efficient trade across borders.

Guangxi is China's gateway to ASEAN. With the partnership between Singapore and China governments through the Southern Transport Corridor, greater trade is expected to transit from as far as Europe to Guangxi, and onwards to Singapore and ASEAN either through land or by sea. This will create a ripple effect for traders to leverage logistic infrastructures along the STC from Guangxi to Singapore, ASEAN and the rest of the world.

The pilot will enable traders to reuse digital data from their shipping documents for import and export declarations, enabling a seamless declaration process for faster goods clearance across different Customs nodes, reducing re-keying in of data, filing errors and consequent fines.

Partners can also access relevant information on a common platform that tracks declaration information chronologically, enabling better communications between parties with real-time visibility of their goods' movement, enabling better resource planning and record-keeping. This module also increases productivity by one-and-a-half times, enabling business owners to streamline resources. In addition, this pilot international module will also include other key physical and non-physical features such as regulatory and financial activities on a digital eco-system that serves the community of logistics players and stakeholders.

Mr Li Heng, Vice President of CAIH said: "As part of the international cooperation in the development of Southern Transport Corridor Single-Window, CAIH and GeTS' pursuit in developing inter-connectivity among ASEAN countries with China through B2B connectivity (private sector), will be an impetus to facilitate trade and Customs clearance between China, especially for the provinces along STC, and with ASEAN.   This in turn will promote in-depth collaboration in logistics, trade, financial and other fields within the region.   This initiative is of great significance that will further advance the construction of the China-ASEAN Information Port, and promote cross-border trade in the central and Western regions of China."

Mr Eugene Wong, Chairman of CrimsonLogic and Global eTrade Services (GeTS) said: "China is becoming the largest economy in the world, with the volume of trade transactions growing exponentially within Asia. The proposed  Southern Transport Corridor from Guangxi to Singapore, is a strategic connection for business communities between China and the ASEAN region.  We are pleased to work with CAIH to achieve this critical connectivity in order to facilitate trade for businesses."

Mr Chong Kok Keong, CEO of Global eTrade Services (GeTS) said: "We are very honored to be able to establish a win-win partnership with CAIH , where we are able to bring our global trade knowledge and expertise to elevate the efficiencies of trade compliance to the next level in Guangxi and to the rest of China to make global trade more accessible, predictable and easier.  Together with CAIH, we hope to establish a greater foothold in one of the world's largest economies that will further enlarge our current global user base of 6,400 customers and close to 175,000 connected parties."

About Global eTrade Services (GeTS)

Global eTrade Services (GeTS) is a CrimsonLogic subsidiary and a key growth engine for the Group.  GeTS has a comprehensive suite of services that helps traders meet regulatory and compliance requirements from Government agencies and trade associations around the world.  Based on a SaaS model, GeTS is centred on a Single Window (SW) that facilitates global trade with Compliance Connectivity, eAdvisory and Data Analytics suite of services.

Peranakan 'cai png' eatery Belimbing Superstar shutters after 5 months, staff shocked by sudden closure
Public should use surgical masks, not N95 masks, to guard against Wuhan virus spread: Experts
Maid forces baby's hand into boiling pot, says agency told her to do it
Singapore hospital warns against eating hotpot more than once a month, seafood and chicken broths among least healthy
Tin Pei Ling’s CNY mood dampened by racy photoshopped image of her spreading around
We reveal cheapskate ways you can save money this Chinese New Year
TikTok trend sees men dipping their balls in soya sauce to find out if they can taste it
15-year-old Chinese 'grandma' gets plastic surgery to look her age
Yikes! Carrie Wong was pushed off a cliff for filming
5 reasons why UNDONE watches make classy, customised gifts for someone special (including yourself)
Glass tabletop 'explodes' during hotpot dinner, leaves behind bloodied mess
I quit my dream job, went out of my comfort zone and I'm happier than ever

Malaysia's largest amusement park opens in JB today
5 game-changing home appliance cleaning hacks for CNY
Army women who survived Tekong share how they handled their period in the jungle
R&B Tea free upsize for those born in the year of the Rat, Sheng Siong CNY promotions & other deals this week

This Made My Day: Cleaner returns cinemagoer's wallet containing $800
Watch out for the bike: Teens cycling in Plaza Singapura
Handmade CNY decorations at Fusionopolis stolen within a day of display
Endless visiting: What AsiaOne staff wish Chinese New Year is like