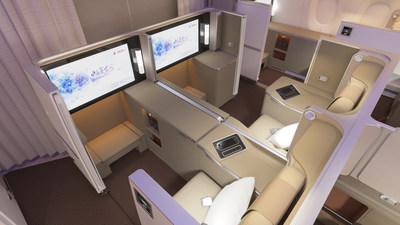 The introduction of the new airplane, which is more spacious, greener and quieter than previous models, is part of efforts by the Shanghai-based airlines to meet the diversified demand for a high quality travel experience in the air.

The cabin of China Eastern's first A350-900 is divided into three parts -- a business class section with 40 seats, including four premium business seats, a super economy class area with 32 seats, and 216 economy class seats.

The two premium business class seats in the middle row are also foldable, allowing flight crew to reshape the space into a community area that up to four people can comfortably use for a business meeting or family gathering.

Super economy and economy class travelers will find their trip in the China Eastern A350-900 jets to be more comfortable thanks to the new stylish seats from Rockwell Collins. The 12-inch high definition display installed on each seat in economy class -- it is the largest across all airlines in the world -- provides passengers with a top quality viewing experience.

Over in super economy class, each cradle-shaped seat is equipped with a 13-inch high definition display, independent AC and USB power outlets, leather seat covers, and a larger than normal table plate, all of which help accentuate the level of comfort.

Passengers can also look forward to more diversified media and entertainment content with China Eastern's latest generation in-flight entertainment system, the Panasonic EX3/GCS, which is an all-round upgrade of the previous generation.

Like all wide-body aircraft in China Eastern's fleet, the new A350-900 is also equipped with the new generation in-flight Wi-Fi which has a maximum speed of 200Mbps.

China Eastern's "Kitchen in Air", which comprises new microwaves, coffee machines and multi-functional fridges will also ensure that the cabin crew are always ready to meet the requests of each and every guest.

China Eastern currently operates the world's second largest and Asia's largest Airbus fleet which comprises nearly 700 aircraft, including more than 360 Airbus jets. The company will receive two more A350-900 aircraft this year, with the last of the 20 aircrafts ordered scheduled to be delivered in 2022. All these new planes will be equipped with the next generation cabin service system.