BEIJING, July 12, 2021 /PRNewswire/ -- The past June of 2021 witnessed the 46th anniversary of the establishment of diplomatic relations between China and the Philippines and the 20th Friendship Day. The relationship between Philippines and Chinese people are like the mountains and water in Taal Lake, surrounding and reflecting each other and thus always connecting together.

Taal Volcano is now standing still in the water of Taal Lake, with flimsy white clouds hung quietly in the sky. Although the volcano has begun to show signs of instability since February 13 this year, it has not yet disturbed the daily activities of residents nearby.

The eruption of Taal Volcano on January 12, 2020 presented a stark contrast to the above scene. With phreatomagmatic eruption beginning at 1 pm, the explosion later caused a giant plume of ash shooting about one kilometer into the sky at 3 pm. The continuous outpouring of ash and smoke finally led to a 10- to 15-kilometer-tall steam-laden tephra column, which rained ashfall as far as Quezon City which was located 72 kilometers away. This volcanic eruption forced the closing of most local commercial establishments, gas stations and tourist attractions, and affected electricity and water supply services as well. Over 30 thousand residents were evacuated.

A white vessel, with a red banner written "Making the South China Sea a Sea of Peace, Friendship and Cooperation" hung on its side, arrived at Pier 15, Manila on January 14, 2020 and donated all the stored goods on board to local residents, including 600 pieces of N95 masks and a large amount of rice, flour, oil, self-heating food and other food packs. These materials were quickly distributed to the victims through the Philippine Coast Guard, and priority was given to students and the elderly in accordance with humanitarian principles, which alleviated local pressure.

However, the arrival of these emergency supplies was actually unplanned. All the donated goods were originally prepared for the crew on this vessel to use.

The vessel, coded 5204, is a ship of the China Coast Guard. On the invitation of the Philippine Coast Guard, it set off from Hainan to pay an official four-day visit to Philippines, aiming to strengthen the bilateral cooperation on maritime affairs of common concern, including maritime law enforcement, combating transnational crime at sea, and maritime search and rescue. This was the first time the ship of China Coast Guard visited the Philippines, in the spirit of the Memorandum of Understanding (MOU) signed in October, 2016. 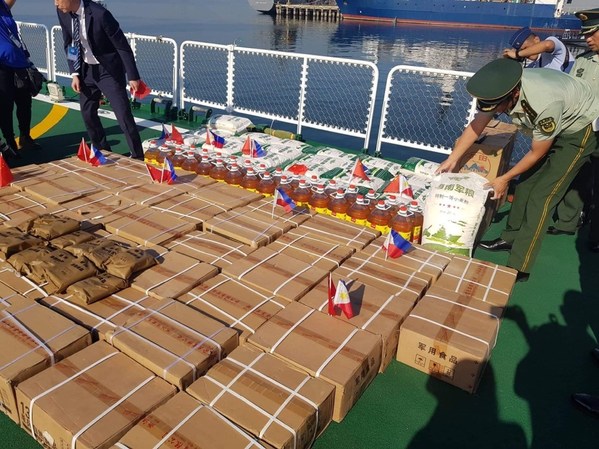 However, on the day of its departure from Hainan, it heard the news of Taal Volcano's eruption. Upon learning the news about the volcanic disaster, Captain Wang Zhongcai decided immediately to donate all the reserved goods to Philippines. He communicated with the Philippine Coast Guard first time and expressed sincere willingness to donate the reserved food and logistic supplies to the best of its ability to help the Philippine people. When this vessel arrived in Manila on January 14, the donated goods were immediately handed over to Philippine coast guard on the deck of CCG 5204.

Friendship is reciprocal. The kindness from the other side of the ocean was cherished by the Philippines. Many local residents stood around the harbor to receive the Chinese guests. And a grand ceremony was held to welcome CCG 5204, attended by both local people and oversea Chinese, as well as officials and leaders from Philippine government and Chinese Embassy in Manila. As reported by Philippine Star, the Philippine Coast Guard commandant Joel Garcia attached historical meaning to this visit and spoke of the warm welcome he had received during his last visit to Beijing.

The third meeting of the Joint Coast Guard Committee on Maritime Cooperation started on the afternoon of January 14. On January 15, China Coast Guard and the Philippine Coast Guard conducted joint maritime drills on search and rescue, as well as fire-fighting drills at sea in the waters off Manila. During the four-day visit, the Philippine Coast Guard and China Coast Guard not only completed the scheduled exchanges on maritime cooperation at this meeting, but also held a series of diverse activities such as the ship's open day, deck receptions and friendly basketball matches.