Power Construction Corporation of China, or PowerChina, is one of the world's largest constructor and investor with the most integrated industrial chain. It entered the Pakistani market in 1987, and as an active participant in the construction of the China-Pakistan Economic Corridor (CPEC), has been investing in local infrastructure construction, especially in power stations. Over the years, PowerChina has become a major force in supporting economic development of Pakistan. 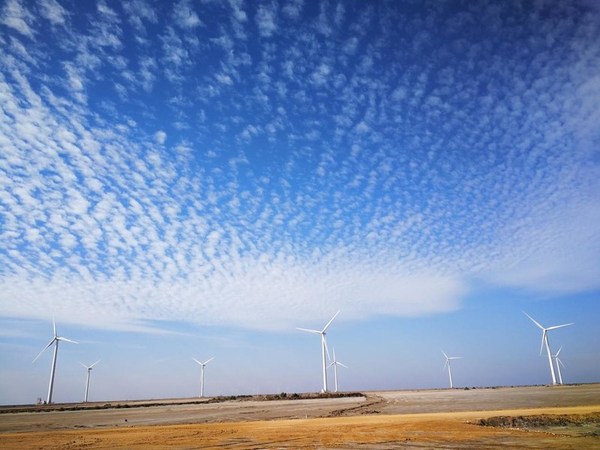 In recent years, big projects PowerChina has undertaken include the Diamer Basha Dam Project(MW-1), the 4th  and 5th expansion of the Tarbela hydropower station, the wind power projects cluster, and the Port Qasim power station. Besides, the company has shouldered its social responsibilities; it is enthusiastically involved in local public charities, and provides employment opportunities for the people of Pakistan.

PowerChina is also committed to environmental protection. It has participated in the Clean Green Pakistan Index (CGPI), and has been working hard towards a China-Pakistan community with a shared future and the green Belt and Road Initiative.

Around the Tarbela hydropower station, over 3,000 trees planted by PowerChina are lush green. There is also an orchard nearby, which has been handed over to the locals.

Tarbela hydropower station is the largest and most important power project in Pakistan. Since the beginning of the 4th expansion in 2013, rules and regulations have been established and improved for environmental protection. The project adheres to sustainable development, strives to save energy, and reduce emissions and pollution, and strictly complies with laws and regulations of environmental protection in Pakistan, and World Bank HSE management standards.

The Tarbela 4th extension project was completed on June 3, 2021, 27 days ahead of schedule. With the project, the existing installed capacity of Tarbela has been increased to 4,888 megawatts, accounting for one fifth of the country's total installed capacity. The project delivers over 3 billion kilowatt-hours of clean electricity to Pakistan's national grid every year, meeting the demand of 2 million households and greatly alleviating the shortage of power in the country.

About 315 kilometers upstream from the Tarbela dam is the Bhasha dam, which is under construction now. Known as the "Three Gorges of Pakistan," Bhasha dam is expected to generate 18 billion kilowatt-hours of electricity per year and to increase the efficiency of the Tarbela dam. Together, the two dams will provide Pakistan with clean and green hydropower resources. So far, Power China has completed 2,954 megawatts of hydropower projects in Pakistan while 9,070 megawatts are under construction.

Donations to Local Communities and Schools

On the vast tidal flats of Karachi, a southern port city in Pakistan's Sindh province, whirling windmills are a great sight. Nearby, local children study and play in a school built by PowerChina which has donated 400 books, 30 sets of desks and chairs, and helped recruit a teacher for them.

Dawood wind power plant, is a green energy project jointly invested in by PowerChina and Pakistani investors, and is also one of the 14 priority energy projects along the CPEC. On April 21, 2015, the leaders of the two countries jointly unveiled five energy projects along the corridor, including the Dawood wind power plant, through a video link. Up to date, the plant has been in operation for five years, providing electricity to 100,000 Pakistani households and reducing carbon emissions by 122,000 tons per year.

Another project, Master green energy project, is the first project to be started and completed under Pakistan's new round of electricity pricing policy, and  its availability during reliability running test reaches 99.86 percent, which is much higher than the 85 percent level required by the local power purchase agreement.. However, the climate there is arid, with rare and unevenly distributed rainfall, and local residents have long suffered from water shortages.

To tackle this challenge, PowerChina built a dam free of charge for local residents with a maximum water storage capacity of 2.25 million cubic meters at the junction of the Master green energy project and a local village. The amount of water stored is equivalent to an entire year's water requirement for the 21,000 locals.

In gratitude, the villagers set up a monument beside the dam and engraved the name of Faisal Bangash, the Pakistani site manager, and Jackie, the English name of Lyu Guanghua, the Chinese project manager, on it. The monument stands as a testimony to the friendship between China and Pakistan.

In addition, during the COVID-19 pandemic and a locust plague, PowerChina also donated batches of medical supplies and funds to Pakistan. Other contribution includes volunteer services and donations to local schools for years, and pairing up with an orphanage in Karachi, etc.

The Port Qasim coal-fired power plant is the first large-scale energy project implemented under the CPEC. It was described by the then Pakistani prime minister as country's number one project.

To make it greener, PowerChina planted 125 acres of mangroves there. Additionally, utilizing advanced technologies, all the water for production and residential use comes from desalinated seawater, saving more than 7.5 million tons of precious fresh water for the local area. Meanwhile, zero discharge of industrial wastewater was achieved, and all the other discharge indicators are significantly better than the environmental protection standards of Pakistan and the World Bank.

By the end of September 2021, Qasim power station had generated over 32 billion kilowatt-hours of electricity,providing Pakistan with green, clean and cheap electric energy..

Since entering the Pakistani market, PowerChina has always been people-oriented. It embraced the local market, shared Chinese culture with local enthusiasts, and recruited local employees openly. There are PowerChina open days for college teachers and students, programs to cultivate professional skills of college students and local employees, as well as exchange programs to send local employees to China. During the COVID-19 pandemic, recruitment was also held online several times. With a mature talent management system, most of the Pakistani employees have grown into capable professionals in related fields.

PowerChina also respects local culture and customs. It has set up prayer rooms, canteens, and dormitories specially for Pakistani employees. In some projects, for some religious holidays, a bonus is given to local employees, and Muslim employees are entitled to a paid vacation every five years for the hajj to Mecca. Local employees are also invited to celebrate Chinese festivals together.

Using cricket as a medium, PowerChina sponsored two cricket leagues in 2016 and 2021 respectively. Project owners, contractors, and manufacturers participated in the games, and local people also came to watch. The cricket league has become a platform for cultural exchanges and friendship between Chinese and Pakistani employees, along with a number of cultural activities such as the launching ceremony of the sustainable development report of PowerChina in Pakistan, China-Pakistan think tank forum, etc.