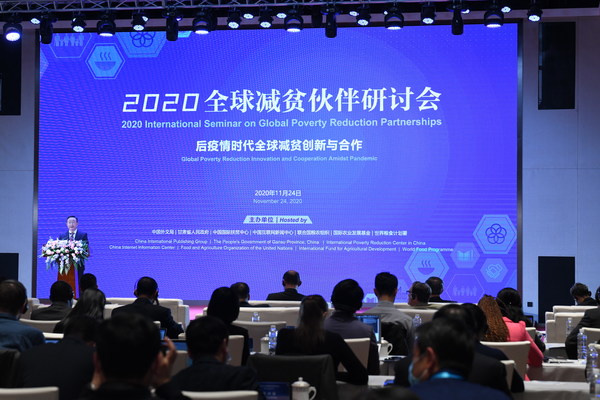 Gansu's last eight poverty-stricken counties had been removed from the poverty list, and the province now sees all of its 75 impoverished counties out of poverty, the provincial government announced last Saturday.

Tang Renjian, governor of the People's Government of Gansu Province, mentioned that Gansu has seen 5.675 million people out of absolute poverty since 2013 and that the local government has provided a total of 83.68 billion yuan of poverty reduction funding since 2016. He also stated that a comprehensive policy system has been implemented to ensure that people stricken by poverty have access to education, medical care, housing, and clean water, completing all the poverty reduction tasks in impoverished areas.

Du Zhanyuan, president of the China International Publishing Group (CIPG) said: "Poverty eradication is part of the world history and is a global endeavor that people have been involved with in various ways for a long time." Du stressed that it is important to combine things like economic development, culture, and digital infrastructure, and it is also vital to protect basic rights through economic development and bridge the digital gap via digital poverty alleviation.

Chen Zhigang, vice minister of the State Council Leading Group Office of Poverty Alleviation and Development (LGOP), noted that China has made a lot of efforts to offset the negative effects of the COVID-19 pandemic. He emphasized that the country has "established an analysis and response mechanism to effectively prevent people from falling back to poverty and provide targeted assistance." Chen also pointed out that the general public has made efforts to promote poverty reduction by purchasing more than 200 billion yuan (US$30.34 billion) of poverty alleviation-oriented products this year.

Ye Anping, director of the South-South and Triangular Cooperation Division, Food and Agriculture Organization of the United Nations (FAO), stated via live video feed that digital tools and technologies are essential to the development of the food system and sustainable agriculture and emphasized the importance of global access. "The massive reduction of poverty in China over the past 40 years since the reform and opening up is one of the great success stories of modern times in the area of global economic and social development," he stressed. "E-commerce in China is an innovative approach to connecting smallholder farmers and big markets and is evolving rapidly."

Ron Hartman, director of the Global Engagement, Partnership and Resource Mobilization, International Fund for Agricultural Development (IFAD) said via video that poverty reduction is a multifaceted undertaking that requires innovation and that there is "no quick fix." It is very important to balance four major factors related to food — sufficient supply, affordable prices, planetary boundaries, and the needs of small-scale farmers. He told participants that investment in agriculture is two to three times more effective when engaging in poverty reduction than in other areas and that farmers can be helped in four main ways, namely by putting them at center stage with regard to policymakers and other leaders, guaranteeing access to financial services so that they can access key inputs at the right times, ensuring that suitable cutting-edge technologies are available to them, and by strengthening partnerships with entities such as the private sector and civil society.

Stanlake Samkange, senior director of Strategic Partnerships, World Food Programme (WFP), stated that cooperation between China and the WFP is essential via Zoom. He noted that the two have embarked on a new era of partnership in order to end global hunger, eradicate poverty, and support the achievement of the SDGs globally by sharing lessons learned from China's successful poverty relief and developmental experience, developing partnerships with public and private organizations, and piloting innovative and replicable programs in order to reduce food insecurity and reach the last mile in China and other countries.

Jose Luis Gioja, deputy speaker of the House of Representatives of Argentina and chairman of the Partido Justicialista, remarked via video that his country is willing to further its experience sharing with nations like China in order to inspire solutions for the people who need them most so that the challenges caused by COVID-19 can be addressed. "Seeking a proper way to eradicate poverty is the basis for China and Argentina to enhance our cooperation," he mentioned. "I hope our two countries can strive for a better future without poverty."

Xiang Huangmei, vice president of the Alibaba Group, said that the company has been committed to utilizing digital methods of poverty eradication in China and beyond and remarked that e-commerce-oriented livestreaming is a concrete example of the digital economy. "It's a demonstration to the power of poverty alleviation through online consumption," she noted.

The multilingual book Keywords to Understand China: Targeted Poverty Reduction and English version of the book The Way Forward 2020: Stories of Poverty Reduction in China were presented to the foreign participants. The former shares China's poverty alleviation practices, providing its experience to the rest of the world by telling the stories of people's efforts to eliminate poverty. It aims to boost confidence between countries to join hands together to fight global poverty. The latter is a collection of 25 poverty reduction stories written by 11 writers from a foreign perspective. It focuses on poverty alleviation via industrial development in China's 15 provinces and regions.

Gao Anming, vice president and editor-in-chief of CIPG, announced the awards associated with the case studies that were submitted for the first compilation of the second call of the Global Solicitation on Best Poverty Reduction Practices.

A half-hour-long livestreaming event devoted to the sale of poverty alleviation-oriented products was held one day before the seminar. With the assistance of the Alibaba Group, 6.5 tons of apples from Gansu's Li county were sold within the first five minutes of the livestreaming. Dr. Marielza Oliveira, FAO Representative ad interim in China, said that providing high-quality agricultural products to consumers in China and other countries at favorable prices promoted poverty alleviation through online consumption.