China's Summer Hit Program The Coming One Concludes on a High Note, Signaling a New Era for Singing Competitions

BEIJING, Sept. 29, 2017 /PRNewswire/ -- The Coming One, a popular online singing competition program that aired in China this summer, concluded its last episode on September 23. Buyi Mao, a fast rising star, came out as the final winner with his new original song Sheng Xia. 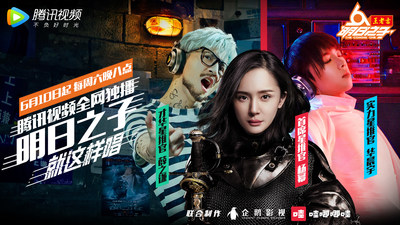 The Coming One poster

Designed to groom new music idols, The Coming One was a blockbuster variety show launched by Tencent Video earlier this year. The program invited superstars to help amateur contestants win the championship. The Coming One has been one of the most successful online talent shows in China to date. As of September 28, 15 episodes of the show have been viewed more than 3.9 billion times, with some single episodes viewed over 400 million times. The Coming One also discovered several original singers including Buyi Mao, Victor Ma and Tianyu Zhao. Buyi Mao's music works have stayed at the top of the QQ chart for 11 days, and his single Xiao Chou has been streamed for more than 500 million times on QQ Music.

The Coming One's innovation in content and in the mechanism for the making of an idol has revolutionized the traditional singing competition model and signals a new era for the format.

As the first mega-sized live idol making program aired over the internet, producers Tencent Video and Wajijiwa have created the program based on a new way of thinking in the internet world.

The Coming One has also changed the role of traditional judges and audience to that of "star promoters" and "fan promoters". During the early stage of selection, three star promoters selected promising contestants based on their own criteria. After the promising candidates were each assigned to a certain label, the star promoters then turned the vote over to fans to decide who would be the most popular idol. This change helped add stickiness to the program's narrative, turning up the sense of "drama" a notch while establishing a stronger connection between star promoters, fans and contestants.

The program went to live broadcast with the fourth episode. Tina Ma, Vice President of Tencent Penguin Pictures, said that a live broadcast was necessary for the competition to be truly successful. Contestants and audience can only genuinely feel the tension and get into the reality of the event when the program is broadcast in real time. The first live broadcast was watched by 24 million people and the figure has kept on growing since. The 12 live episodes were watched by more than 30 million people each on average, with the final drawing an audience of nearly 40 million. Viewers felt decidedly more connected during a live broadcast, in that they sent in twice as many "likes" and comments when watching in real time.

The Coming One's innovation is also reflected in generating superstars, allowing each "circle" to express their unique personality.

Each label was then associated with a "circle" representing a certain set of values. The nine labels have made their debut and the organizer has developed a comprehensive marketing plan for each one of them.

There is much room for the further career development of the contestants. Wajijiwa has signed contracts with the top performers assigned to each of the nine labels and other contestants who were among the top 12 in each rating category. Danni Long, the former talent show leader at Hunan TV, joined Wajijiwa this year and will lead the team in creating next-generation idols based on an entirely new approach.

The Coming One's bold leap into innovation in the digital era will set the tone for how China's future idols are identified, groomed and transformed into celebrities in the future.