China's Wuhan Poses at the Oscars

WUHAN, China, Feb. 26, 2019 /PRNewswire/ -- The 91st Academy Awards were announced on Feb. 24 in the United States. Taiko Studios (Wuhan)'s One Small Step was nominated in the animated short category, according to the Publicity Department of the CPC Wuhan Municipal Committee. Wuhan, capital city of China's Hubei Province, has once again attracted global attention. 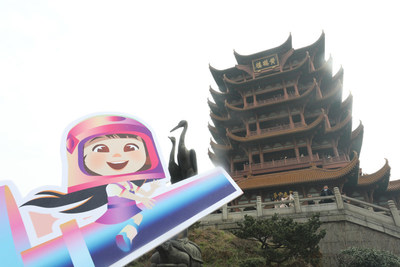 Wuhan citizens cheer for One Small Step for the Academy Award nomination at Yellow Crane Tower, a landmark of the city.

The Motion Picture Association of America appreciated that simplicity can also convey messages in such a strong manner. The 7-min-40-second work was inspired by the experience of China's first batch of women astronauts. With the support from her shoe-making father, Luna, a Chinese American girl, dreams of becoming an astronaut. Luna's pursuit of her dream echoes with the Wuhan city spirit of "taking the initiative and striving for excellence." The animation was filled with Wuhan elements: Luna's lives in the Optics Valley in Wuhan, with a hot and dry noodle shop nearby - one of Wuhan's specialties.

As the title tells, one small step for Taiko is a big step for the animation industry of Wuhan. Wuhan is a megacity with a population of 10 million in central China. It is home to 89 colleges and universities, with nearly 1.3 million students on campus, the most among all cities across the world. It is also a world-renowned city of culture, a national demonstrative base of cultural and scientific integration. It joined UNESCO Creative Cities Network in 2017, and became the first World Design Capital among China's inland cities.

The city government has introduced various favorable policies concerning household registration and housing to attract young talents to stay in recent years. To build Wuhan into a city of entrepreneurship, related authorities have vigorously supported local entrepreneurs and solicited entrepreneurial teams from other cities, attracting talents from all over the world.

The 7th World Military Games is going to be held in Wuhan this October. About 10,000 athletes from more than 100 countries will gather in Wuhan, which will present a modern, harmonious, intelligent and clean city to the world.