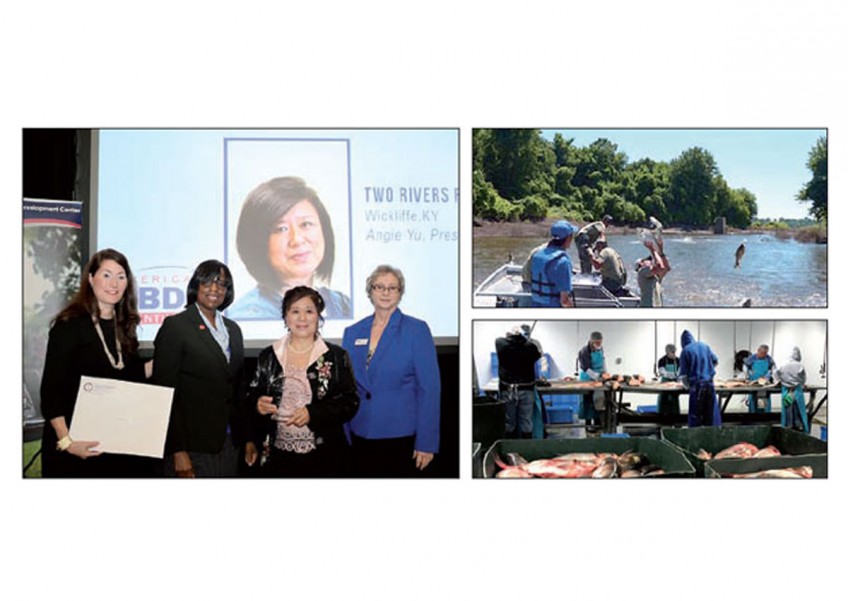 Angie Yu (third from left) in photo above, is honored as a 2017 Kentucky Pacesetter for her establishment of the Two Rivers Fisheries in Wickliffe, Kentucky. Top right: fishing for Asian carp. Bottom right: processing of carp at Yu's plant.
China Daily/Asia News Network

That's all due to the first Chinese-American family to live in Wickliffe, Smith's hometown.

Wickliffe is a town of about 700 in Ballard County, western Kentucky, which has a population of roughly 8,000.

In 2013, Angie Yu, president of Two Rivers Fisheries, and her husband moved to Wickliffe from Los Angeles to start her own business of bringing Asian carp to the dinner table.

Yu, originally from Heilongjiang province in Northeast China, first read about the Asian carp dilemma of the Mississippi River in 2010.

Asian carp was imported to the US from China in the 1970s for the purpose of helping to clean commercial ponds.

However, Asian carp spilled into the freshwater system due to flooding and have become an environmental problem due to their ability to prodigiously reproduce and crowd out native spices, upsetting the ecological balance and harming the local fishing industry.

"Asian carp is very popular in China; people consider it very delicious. Why don't we introduce it to the people here in the US?" Yu wondered.

After some research, Yu chose Wickliffe to locate her business. Yu had her struggles, but she persevered. Now, her company is looking to produce 2,000 tons of Asian carp by year's end.

The building that houses the Two Rivers Fisheries was built by the county government in 2002; it was unoccupied until Yu came along 10 years later.

"She is the first occupant of the building, and they've done a great job. And they are adding on, as you will see. I was really impressed by the number of people that are employed here."

Yu has 16 full-time employees and is looking to expand the business. "The business is really growing, and it has been amazing to us to see the transformation of the city since they came," Cooper said.

The city of Wickliffe, with a history of 135 years, never had a single Chinese person live there. "We're the first Chinese-American residents here in this city. I feel like we have to represent China in a nice way," said Yang Yuliang, Yu's husband, who moved to Wickliffe together with his wife in 2013.

Yu and her family have introduced a lot of Chinese culture, philosophy as well as genuine Chinese cuisine to the local community. The first time Yu cooked tea eggs (boiled egg is cracked and boiled in tea, sauce and/or spices ) for local people, they looked at them but wouldn't eat them. Then someone tried them and said he wanted more.

Smith, who started working for Yu once the company was established, was wary of her Chinese cooking. Once Smith dumped tea eggs Yu left in a bowl the day before, thinking they were bad.

Now Yu said he eats everything she cooks, even vegetables common in China but rare here, like chives.

One night, Yu made 24 dumplings for Smith.

"Everybody loves her, as she is nice," said George Lane, mayor of Wickliffe, whose son is in the fabrics business and has visited China about six times.

At the opening ceremony for Yu's company, Lane brought her something special: a bottle of Maotai. Maotai is one of the most famous brands of baijiu liquor, which is made in the town of Maotai in Guizhou province.

"It's pretty amazing to see that the community really welcomed Angie. She has friends, and every morning I saw they exercise together," Cooper said.

Yu said the city always helps her. The City Hall allowed her to use the meeting room anytime when she came here for the first time and had nowhere to stay. "Whenever we need help with water or gas, the city always came in one minute," Yu said.

The paper industry used to be the major economic pillar of the city. Verso, North American producer of coated papers, had one of its mills in Wickliffe since 1960s.

In April 2016, Verso announced it would shutter its Wickliffe paper mill due to the declining demand for coated paper.

The Wickliffe mill had one paper machine with the capacity to produce 280,000 tons of coated paper and 30,000 tons of dried market pulp.

The company said it had been trying to find a buyer for the mill but was unsuccessful.

"We lost about US$500 million(S$700 million) annual investment in this region," Cooper said.

"We still have a lot of people unemployed and we would like them to get back to work."

Since Yu came to the small town, she has brought new hopes for Ballard County to revive its paper industry.

She said a lot of potential Chinese investors come here every month to look for opportunities.