Chinese Crawfish a Hit with Football Fans in Russia 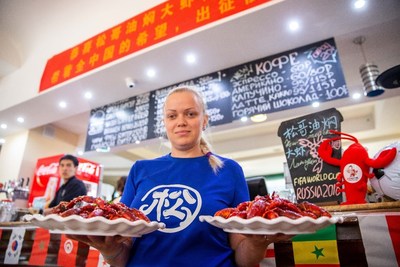 The collaboration saw the popular Chinese brand dispatch several of their top chefs to the region. In a strong atmosphere of collaboration and team spirit, the chefs worked alongside dozens of local catering companies to prepare the world-famous Chinese dish for fans. In the spirit of coming together, customers were invited to pair one of Songge Crawfish signature dishes with their favourite beer or Russian Vodka while cheering on their team.

Xu Song, the founder of Songge Crawfish, commented: "We are incredibly happy to be here. Russia is not just the World Cup host but also an important fulcrum of the 'One Belt, One Road' Initiative. Therefore, we hope that our pop-up store will not just satisfy hungry fans during the games but also leave a lasting impression".

Processing and preparing the crawfish for hundreds of hungry fans is no easy feat. First, Songge Crawfish dispatched a special team of quality control experts to Russia to inspect local crawfish farms, where they sourced batches of crawfish in advance to ensure they were fresh and of a high standard.

The team then followed a strict 37-step process, including a 9-step preparation phase with an insistence on the cleaning of each crawfish by hand to ensure the hygiene and safety of each one. This was followed by a 25-minute braising phase where chefs identified and removed sub-standard crawfish before beginning the 28-step cooking process. To ensure the authentic flavour of the dishes, Songge Crawfish chefs relied on shipments of key ingredients flown in from mainland China.

Songge Crawfish was founded in Shenzhen in 2015. Since then the award-winning brand has entered a period of considerable growth opening four stores in 6 months. Songge Crawfish currently operates 12 sit-in restaurants and five takeaway stores nationwide with plans to open a further 50 branches in the south of mainland China before the end of the year and Singapore next year. The brand's long-term goal is to take the Shenzhen Crawfish craze global.