To popularise claw doll grabber machines, "reality games" are enacted at malls to demonstrate the fun. At the Joy City shopping mall in Yantai, Shandong province, a consumer, suspended by a crane mechanism, doubles up as a doll grabber.

Doll dispensers at public spaces show potential to emerge as a lucrative trade.

Sometimes, business can be fun when fun is the business. Operators of claw doll grabber machines in China will probably agree.

Such machines are fast becoming ubiquitous at public spaces such as railway station concourses, malls, restaurants, KTV joints and cinema lounges, which appear to be the breeding grounds of innovative small businesses like automated instant photography studios and karaoke kiosks.

An optional fourth step could be saying a prayer so the metal claw would grab the doll and move it to the machine's delivery slot carefully without dropping it midway.

Great fun for the players; even more fun, or money/profit, for the machine operators, if the market insiders are to be believed.

A claw doll grabber machine is basically a brightly illuminated glass-and-metal box containing dolls (little colorful teddy bears and the like), neatly slotted in niches, which can be manoeuvred out of the machine through an electronic mechanism.

On the first floor of the Gate City Mall in Beijing, there are about 20 such machines. Hung on the wall above them is a big billboard calling the corner Joy Kitty. Young women or couples passing by stop now and then to push their luck.

Although the claw doll grabber machine business originated in Japan, its beginnings in China were as a low-end street game offered by some shop owners to attract children. Gradually, its popularity grew among consumers.

"Before our wedding, my husband, then my boyfriend, and I often played this game together. It helped us bond well. What's more, when he won a lovely doll and gifted it to me, I gifted him my heart," said Li Ying, a public relations practitioner, gushingly, reminiscing about her whirlwind courtship in Beijing.

After that, Li fell in love with the machines, rather the cute dolls in them, as well. Every shopping or dining out session since 2010 included some play time. In all, the doll games cost her several thousand yuan. At their home, she has about 50 doll trophies, including Mickey Mouse and Pikachu, to show for her effort.

"Only 2 yuan for a chance to grab a cute doll－it's worth trying," Li said. "When I finally succeed after several attempts, the sense of elation fills me with happiness."

Young people in the 18-38 age-group, especially women, constitute about 60 percent of the players of the doll-grab game, said Long Ze, who works at the Beijing branch of Guangzhou Star Nigel Trade Co Ltd, one of the Chinese companies that operate doll-grabber machines in China.

Founded in 2008, the company now sells about 9,000 machines every year worldwide, including Southeast Asia and Europe. It also authorizes agencies to use its brand or cooperates with shopping malls directly, according to Long.

That is made possible by the fact that a claw doll grabber machine's price could range from 5,400 yuan to 9,000 yuan, while the cost could be more than 3,000 yuan, Long said.

Such machines can be bought even online these days, often at much cheaper prices. For instance, Taobao, China's largest online marketplace from the Alibaba stable, features advertisements that highlight prices of around 1,000 yuan per machine.

"The industry has very low entry barriers," said Cao Lei, who, along with several friends, invested around 30,000 yuan in 2014 to set up four claw toy grabber machines at a theme park in Shanghai.

Read Also
Move over plushies, here are the weirdest things you can catch with claw machines 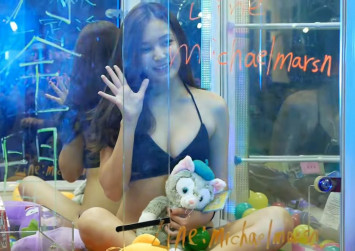 "This business didn't demand much time from us. We hired some staff to take care of the machines. That's about it."

Cao didn't need to pay any rent and electricity charges to the theme park. Worker wages and maintenance cost 5,000 yuan per month, to cover tasks like filling dolls in empty niches and dealing with machine breakdowns, he said.

Dolls cost about 1,000 yuan. Cao did not provide details like net profit figures, but said a player typically wins a doll costing 12 yuan after 15 attempts. Each machine was believed to have been programmed in such a way that it gave away only two dolls per month to players.

Cao's business was ejected from the theme park within three months as the latter wanted to set up its own machines. The theme park broke the one-year contract it had signed with Cao.

Long said some doll grabber machines are based on probability whose success rate can be fixed in advance, in order to control costs.

Other type of machines are technology-based, which allow players to claw dolls through sheer skill.

"Probability-based machines will disappear from the market one day," Long said. "Compared with losing too many dolls, we are more afraid of customers not winning any dolls at all because they may never come back to play again."

The emerging business segment faces other concerns. Some agents may stuff the machines with cheap pirated dolls that infringe copyrights. If caught, damages could be thousands of yuan.

"Though the business appears easy to enter, it's actually very hard to succeed over the long term," Long said. 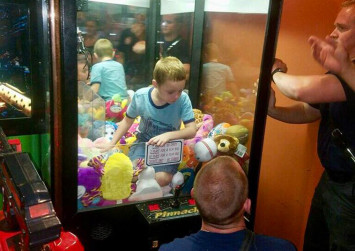 Given the high frequency of their usage and high wear and tear, doll grabber machines need to be repaired or refurbished every three to five years.

Rental at modern public spaces tend to be high as well－1 square meter of commercial space in Beijing could cost more than 1,000 yuan per month. A machine may need 0.6 sq m to 2 sq m.

But some market insiders are pinning hopes on China's consumption upgrade and innovation.

New types of claw machines allow users to operate them using mobile apps. Others dish out expensive ware such as premium smartphones instead of dolls. But this segment faces potential regulatory risk.

"More professional operators will survive in the future. Artificial intelligence technologies such as virtual reality and augmented reality may be integrated into claw machines to improve user experience," Long said.