- Cleanwrap's sanitary gloves, which had an outstanding performance in the April 15 general election, launch on Amazon (US store).

- Evergreen has offered to supply masks to Wal-Mart and H-Mart in the United States.

- Exports of quarantine and protective products, such as diagnostic kits, disinfectants, etc., are on the rise.

SEOUL, South Korea, June 8, 2020 /PRNewswire/ -- Korea's 'K-quarantine' model with Korean quarantine and protective products has come to light on the global stage during the COVID-19 pandemic. Moreover, Korea has been rated highly for showing exemplary quarantine capabilities through the April 15 nationwide general election, a first amidst the COVID-19 crisis. 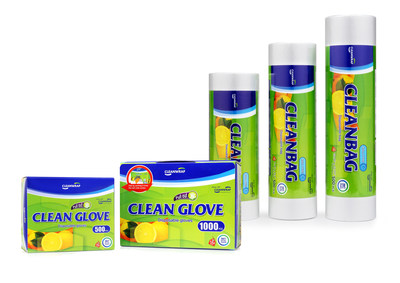 About 1.25 million packs of sanitary gloves (or 60 million gloves) made by Cleanwrap, the No.1 food packaging company in Korea, were supplied to polling locations through the National Election Commission to prevent the risk of cross-infection during the voting process. Cleanwrap's sanitary gloves have exhibited their safety by using FDA-certified raw materials such as Low Density Polyethylene (LDPE), a nontoxic material, and achieved a cumulative sales volume of over 290 million packs from 1997 to early March 2020. Following the increasing demand for sanitary gloves in overeseas markets as well as in Korea, Cleanwrap launched their glove products on the US Amazon platform. CEO Mun-Su Seung of Cleanwrap expressed, "I am delighted that 'Clean Gloves', which have played a major role in the April 15 general election, will be able to support the defense of COVID-19 not only in Korea but around the world by entering Amazon."

The general election took place through a quarantine process to prevent further infection or spread to the community, despite more than 29 million voters and 10,000 self-isolators participating in the event. At the time, all voters were not allowed to enter the polling area without wearing a mask, and, before entering, they had to undergo a body temperature check, disinfect their hands, and also wear sanitary gloves provided at the location. This has attracted interest from foreign health authorities and global distribution companies towards Korean sanitary gloves, masks, etc. which have proven to be both safe and effective.

Korean masks have gained global competitiveness through 'KF (Korea Filter) Certification', which represents the blocking performance of fine dust or harmful particles, which have recently led to an increase in overseas demand. Evergreen, a mask producer that succeeded in localizing the mask for the first time in Korea, can produce about 200,000 masks per day, while recently manufacturing capacities have surged approximately 2.5x compared to before the COVID-19 crisis. Additionally, Evergreen was offered a supply contract for masks in February by major U.S. retailers Wal-Mart and H-Mart.

The overseas advancement of quarantine and protective products, such as diagnostic kits, disinfectants, etc., is becoming rapidly apparent. HUONS USA, a US subsidiary of the Korean pharmaceutical company HUONS, was selected as a supplier of quarantine and protective products to the Washington State government in the United States and, in relation to COVID-19, is resulting in an export of 6 billion won worth of the products. Furthermore, KONAD, a company specializing in cosmetics, said, "The United States, Japan, Saudi Arabia, Cambodia, and other countries around the world are sending requests to purchase our hand sanitizers and hand disinfectants."

Distribution industry officials in Korea reported, the awareness of K-quarantine is increasing worldwide, and exports of related products are expected to increase significantly in the future as Korea has been recognized as a country which sets an example for quarantine as demonstrated by the April 15 general election.

Cleanwrap Co., Ltd, founded in 1983, launched the first LLD-PE packaging wrap harmless to the human body in Korea and has maintained top positioning in the field of domestic food packaging wraps,and holds patents in 5 countries including at home and abroad, as well as US F.D.A approval. Their products are consistently loved by homemakers in 18 countries, including Korea, through differentiated packaging wrap products and premium kitchen appliances. Moreover, Cleanwrap continues to develop new products through constant change and innovation via their 'Living Lab', which has led them to lead the market for food packaging and household items. Recently, the company is attempting to commercialize and launch eco-friendly biodegradable vinyl through a collaboration with the global chemical company BASF.