Before the press conference, Xu Zhang, Senior Vice President of Longsys, took the guests on a tour of the storage history museum and showed the development history of the storage sector: from keeping records by tying knots in ancient times to the adoption of modern PCs, mobile phones, etc. It recognizes the application of storage in various fields and has witnessed the growing storage capacity in an increasingly smaller size.

The conference started with Mr. Huabo. Cai's introduction about the development and values of Longsys, as well as an analysis on the global storage sector – given the notable changes in DRAM and NAND FLASH industries in just 20 years, dozens of foreign companies have joined the competition, but only five or six leading companies survived in 2011.

Next, Shan Wan, Chairman of COLORFUL Group, took the stage to make a speech. Chairman Wan said that despite the changing international landscape, what is constant is that stellar companies often concentrate on the products. Consumers will make wise choices as long as there are excellent products.

COLORFUL has been involved in the DIY market for over two decades, and is the number one selling brand of graphics card products for 17 consecutive years. On the other hand, Longsys is a technically advanced company with 21 years of experience in the storage. The association between these two strong enterprises is an inevitable trend, and we can expect further breakthroughs.

After that, Jordan Zhong, head of Longsys SSD business unit, shared the technology of SSD products. With a leap of the imagination, Longsys Mini SDP (SATA Disk in Package) encapsulates the main control, flash memory and peripheral circuit into one. Its size is only one-tenth of a traditional SSD, and features proof against shock and water, and simple installation.

In 2015, COLORFUL expanded the storage product line. Since then, all products in the computer DIY sector have been developed, including COLORFUL graphics cards, motherboards, SSDs, memories, and Segotep power adapters and computer cases. 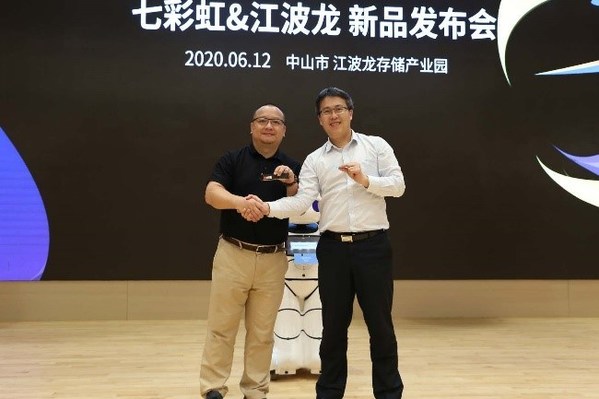 Traditional SSD cooperation model is adopted for SL500 Mini. Longsys provides technology and products, and COLORFUL offers brand and services. The two sides maximize the commercial value to bring vitality to the market.

It adopts Longsys customized high-performance main control, and Micron QLC N28 Flash particles. QLC particles are used because it features a single die capacity of at least 128 GB, which can realize large-capacity storage within the dimensions of 33.4*17.2*1.23mm.

COLORFUL and Longsys forged cooperation as early as 2013. At that time, eMMC used for COLORFUL tablets were produced by Longsys. Longsys' embedded products have quality and performance comparable to any world-renowned brands.

In 2017, COLORFUL cooperated with Longsys again in SSD product line. At that time, the two were already well-known enterprises.

In 2019, COLORFUL launched iGame graphics card product with a display on the radiator, which has Longsys' embedded NAND FLASH product. It brings new technology experience to game players.

COLORFUL and Longsys for a winning combination! Longsys will foster cooperation with COLORFUL going forward. It is believed that through concerted efforts of both parties, better storage products will appear.