TOKYO, JAPAN - Media OutReach  - 4 August 2021 - Nomura Real Estate Development Co., Ltd. (Head office: Shinjuku-ku, Tokyo, President and Representative Director: Daisaku Matsuo; hereinafter "the Company") announced that The Seasons Residence, a condominium in Manila, Philippines, promoted jointly by the Company, Isetan Mitsukoshi Holdings Ltd. (hereinafter "Isetan Mitsukoshi HDS") and major Filipino real estate company Federal Land Incorporated, received the highest award for the Philippines, the five-star recognition, making it a candidate to compete against other countries in the Asia Pacific region under the Residential High-Rise Development category of the International Property Awards which recognizes excellent real estate projects across the world. This was the first time for the Company to receive such award. 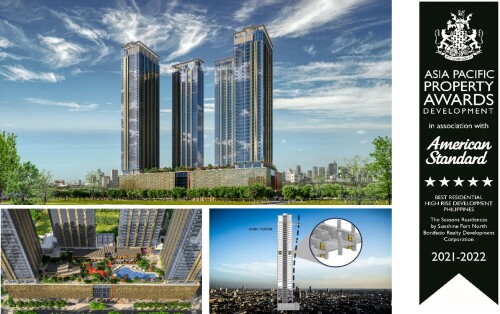 The Seasons Residence is a residential building in a large-scale, mixed-use development in Bonifacio Global, the second largest financial district in Metro Manila. It consists of four condominium towers with commercial facilities on the lower floors and is the first mixed-use development based on a joint partnership between Japanese real estate developers and the retail company in the Philippines. It received the five-star award for being the first residential project to have a unique Japanese concept – from the building design of Nikken Sekkei Ltd to the various building features such as the vibration dampers installed in each tower, tested to withstand earthquakes, typhoons and other natural disasters.

The International Property Awards is one of the greatest and most prestigious awards recognizing excellent residential and commercial real estate projects in the world. It focuses on design, quality, service, innovation, originality and sustainability, and projects leading the industry are recognized by the evaluation committee consisting of more than 80 industry experts. It selects the recipient of the highest award in nine regions namely the Africa, Asia Pacific, Arabia, Canada, Caribbean, Central & South America, Europe, UK and USA as well as the world's highest award in the International Property Award for more than 45 targeted fields.

■  Overview of The Seasons Residence

■  About the Overseas Business of Nomura Real Estate Group

The Nomura Real Estate Group(hereinafter "the Group") has positioned its overseas business as a growth field in its Mid to Long-term Business Plan and plans to invest approximately 300 billion yen in its overseas business by the fiscal year ending March 2028. In addition, the Group has set a policy to expand the ratio of profit earned from its overseas business to 15%–20% of total profit by then. Since its entry into overseas business, the Group increased the number of participating projects under the business system of providing added value to local partner companies and consumers in each country as its largest strength by utilizing the quality and various knowledge on project process management, etc. it has cultivated through residential and office developments in its domestic businesses until now.

In addition, in recent years, the Group has proceeded with the establishment of overseas local bases and the promotion and training of local personnel in countries into which it has expanded in order to strengthen business functions that enable deep involvement in a wide range of business phases such as planning, promotion and sales based on local characteristics instead of simply making net investments or partly joining projects. The Group continues to aim for business expansion and participation in new businesses in countries into which it has already expanded such as Thailand, Vietnam, Philippines and China as well as sustainable growth ofoverseas business through such initiatives. 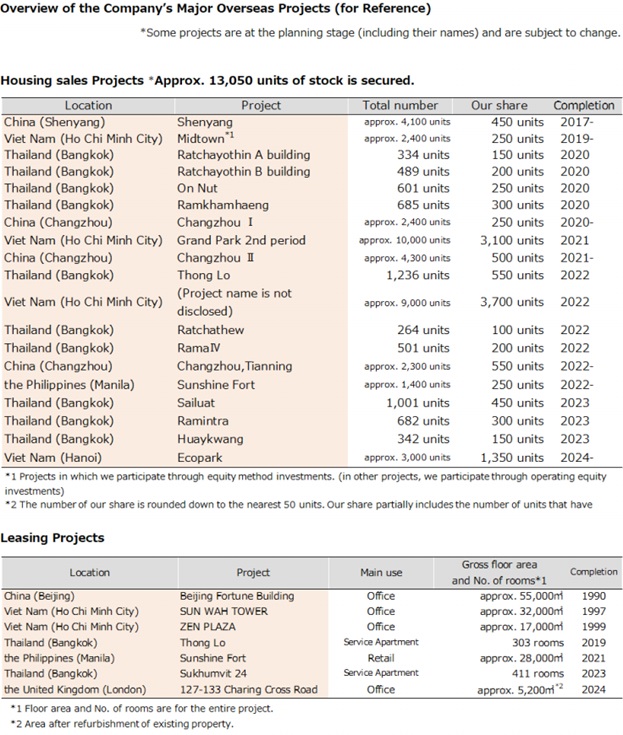