The charitable effort supports China's One Belt, One Road initiative

JOHOR BAHRU, Malaysia, Jan. 3, 2018 /PRNewswire/ -- Amelia, a school girl living in a suburb of Johor Bahru, Malaysia, will feel a difference as she begins her new semester. Born into a family of limited means, the sensible Amelia would never ask her parents to buy her new stationery at the beginning of each new semester. However, the 8-year old will be the proud owner of a new schoolbag as she arrives at school for her first classes this semester. Chinese property developer Country Garden held the "Back to School" campaign at the Forest City project site. Fifty volunteers took 90 children aged 7 to 12 to nearby shops where each child chose new stationery. Each child was provided with needed school supplies worth approx. 500 yuan (approx. $US 75), including schoolbags, stationery, school uniforms, shoes and socks. 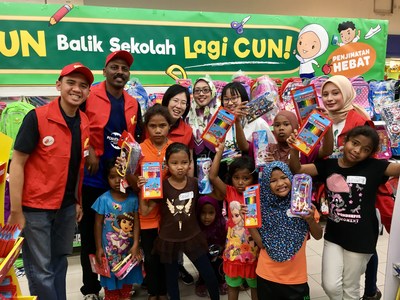 A 10-year old boy, who said he would like to be a policeman when he grows up, said: "My father used to choose inexpensive stationery for me as we don't have much money. But this year, I chose my favorite ones for the first time. I appreciate Country Garden and the campaign means a lot to us."

Country Garden Pacificview corporate communications director Aeron Munajat, said that the company hopes that families of limited means who reside in the environs of Forest City can benefit from the economic development that the project will stimulate in the area and that the campaign also encourages Chinese employees to communicate with members of the local population, deepen their understanding of local culture and further integrate themselves into the local community.

Forest City, which has been running a charitable program since construction of the project began, has donated over 3.2 million yuan (approx. US$480,000) to fund the building of five local primary schools and provide necessary supplies and training for the students since 2015. Of note, several teachers were recruited by Forest City this year to teach Chinese at these schools for three months at no cost to the schools, helping the students there develop an understanding of Chinese culture which will serve as a competitive edge later on in life. The charitable effort has been well received by the local population in Johor Bahru.

In addition, Forest City has also provided financial aid to disadvantaged students at Universiti Teknologi Malaysia (University of Technology, Malaysia or UTM) to assist them in completing their studies. The property developer has also been actively involved in the development of the surrounding communities, including building roads, protecting the marine ecosystem, providing skills training for villagers, spending time during the annual Spring Festival with orphaned children and the elderly and sending greetings to members of the community who are of the Islamic faith during the key Muslim holidays.

"The key to sound relations between states lies in the affinity between their people and this largely stems from mutual understanding, which is the social foundation of China's One Belt, One Road initiative. With an increasing number of Chinese companies expanding into international markets, Chinese traditional culture that always embraces benevolent and philanthropic concepts has increasingly become a part of the countries targeted by the initiative," said China Foreign Affairs University professor Gao Shangtao. "We are pleased to see that Country Garden Holdings, a leading Chinese property developer and one of the world's top 500 companies, has gained acceptance among Malaysians on the heels of the company having launched many public benefit events while engaging 200 Chinese companies in its international cooperation project Forest City in Malaysia. The company's refreshing philanthropic efforts are of outstanding significance to the country's One Belt, One Road initiative as they have facilitated the mutual understanding between the Chinese and Malaysian people and helped create a better national image for China."