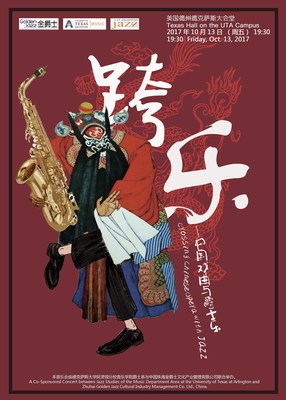 The Poster of "Crossing Chinese Opera with Jazz"

This project has gathered a group of world-class jazz musicians from both home and abroad, and Chinese opera artists, who have been working together and have finally come up with this amazing and significant music performance.

After the successful debut in Zhuhai, Guangdong Province of China on May 26th, 2017, Golden Jazz has been invited by UTA (University of Texas at Arlington) to the United States for academic exchange in a symposium held on Oct 12th, 2017 as well as for the overseas premiere which was held at 19:30 local time on Oct 13th, 2017 at Texas Hall on UTA campus.

Golden Jazz has provided a platform for numerous Chinese well-known opera artists and jazz musicians from both home and abroad and they have jointly presented a refreshing and stunning concert which brings a music cultural clash between the ancient and the modern. Ms. QI Aiyun, a National Level I performer, the famous Qin Qiang opera artist as well as the winner of Plum Performance Award in the 21st Chinese Opera, participated in the concert and sang the classic opera pieces 'The Sole of Straw Sandals' (Ma Xie Di), 'The White Snake' (Bai She Zhuan)and 'Peach Blossoms in March' (Sanyue Taohua). And the well-known US composer, conductor and saxophonist as well as the arranger of the music, Drew Zaremba has adapted traditional opera pieces such as "The Arraignment of Su San" (Susan Qi Jie), "Farewell, My Concubine" (Ba Wang Bie Ji), "The Execution of Shan Tong" (Zhan Shantong), "Qinchuan New Song" (Qinchuan Xin Ge), and "In the Deep Night" (Ye Shenchen) has successfully brought out the essence of both Chinese opera and jazz and has made the musical blending great.

The audience were impressed and amazed by the unique music expression. They gave rounds of sincere and warm applauses to every piece of music in the concert and they even stood up when the concert came to the end, applauding and reluctant to leave. All performers and musicians in the hall were gratified to feel the audience's enthusiasm for their performance. The concert at UTA has attracted the attention of the local Chinese media and the music media. A large number of Chinese overseas students attended the concert, being curious about the effect of the mix between Chinese opera from their own culture which they are familiar with and jazz from the American culture. After the concert, these students shared their views and felt a positive feeling from the event  - they were able to understand both musical cultures better. 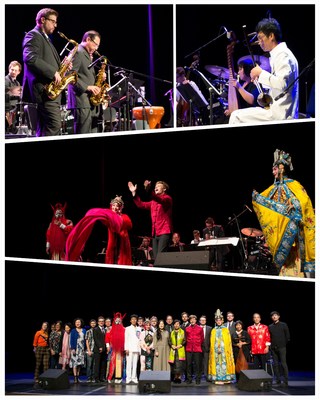 The photos of the concert of "Crossing Chinese Opera with Jazz"

Exciting news is that the project of Crossing Chinese Opera with Jazz has been selected as a key cultural communication project by Department of Culture, Guangdong Province and submitted to the Ministry of Culture of the People's Republic of China. This project is not only for a performance work on the stage, but also aimed to make the most use of values by such musical innovation and cultural blending.

During the symposium, professors from the music department of UTA were deeply impressed by the profound Chinese culture and endless charm of Chinese opera arts, in which they have showed their strong interest. The professors thought this meaningful and wonderful art form should be recognized by more Americans. Therefore, right after the concert, the producer of the project Ms. ZHOU Jing and all the performance artists were invited for a further discussion on a serial of issues in relation to the development of Crossing Chinese Opera with Jazz. For example, issues like how to make this type of music form more naturally and how to recompose more refreshing music pieces by blending the two music forms have been brought up in the symposium.

The trip of Crossing Chines Opera with Jazz to the USA has created more values in cultural communication, academic research and educational innovation. Combining the essence of Chinese traditional opera and jazz music, the new form of world music will unquestionably bring a better understanding of Chinese culture to the world.