Crowds jostle for Hong Kong flats, no end in sight to housing boom

HONG KONG - Hong Kong's red-hot property market kicked off 2018 with hundreds queuing to buy flats in the first major property launch of the year on Saturday, backing expectations strong demand will further lift record prices by 5 to 20 per cent over the year.

The Asian financial hub has one of the most expensive housing markets in the world, with private home prices shattering historic records for 13 months in a row and rising almost 200 per cent since 2008.

Among the some 100 pre-sale apartments offered by major local developer Sun Hung Kai Properties on Saturday, the least expensive flat at a size of 382 square feet costs about HK$8 million (S$1.3 million), or HK$21,000 per square foot, though with a certain payment plan the buyer could get a 22 per cent discount.

The flats are located about an hour's commute away from the central business district.

"For everybody in Hong Kong, buying a flat is a life goal,"said 26-year-old Ms. Chau, one of the some 600 potential buyers queueing up in the first hour.

"I am angry that housing prices keep going up. Now the value of HK$10,000 is like HK$1,000 in the past. For many people they cannot afford to buy unless they have their family's help."

While Hong Kong's flats are getting more expensive, many are also getting smaller.

Read Also
Got a spare $96m? How about a single Hong Kong apartment? 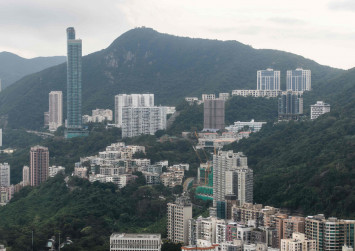 Later this month, major developer Henderson Land Development is expected to launch sales for a residential project with flat sizes ranging between 180 and 420 square feet.

Multiple property consultancies and agencies expect home prices to climb a further five to 20 per cent in 2018 with no immediate end in sight to the boom.

Although the city's de facto central bank has imposed eight rounds of mortgage tightening measures since 2009 on top of the government's tax and regulatory measures, analysts say these measures have effectively locked up the second-hand market's supply, further fueling prices.

But the government stresses it has no intention to relax the so-called "spicy measures."

"Due to very low interest rates, high liquidity and the imbalance of housing demand and supply, the property market is now still red-hot, prices are still at an extremely high level and there is no sign of it coming down," Acting Secretary for Transport and Housing, Raymond So, told legislators on Thursday.

"Therefore, at the moment the government has no intention to ease 'spicy measures.'"