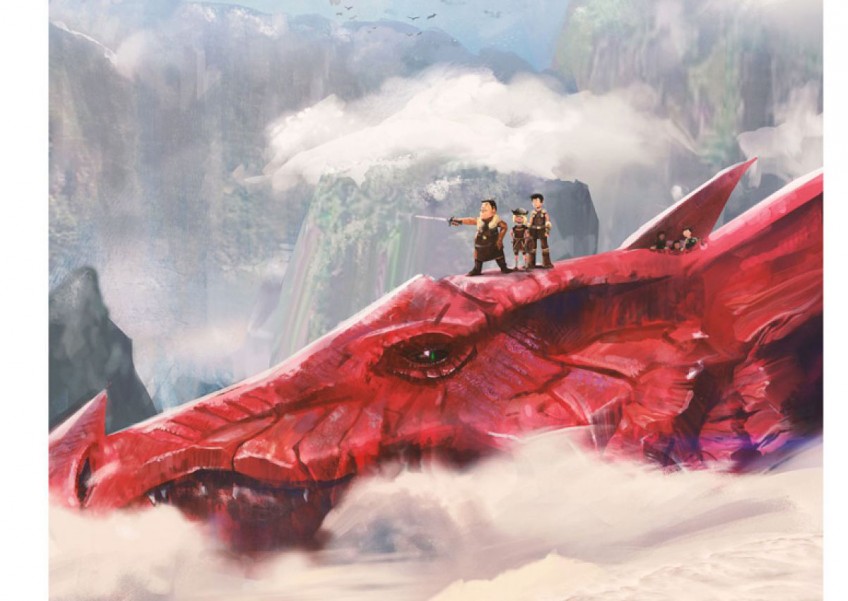 Time travel, as we know it, doesn't exist yet. But if you want a glimpse of the future, Garena is a good place to look. The future, it seems, is young, hoodie-wearing and preoccupied with authenticity. At its sprawling, modish office in Galaxis at one-north, South-east Asia's most valuable startup oozes youth. T-shirts and bright primary colours dominate the open-plan office. Speaking to BT Weekend, group president Nick Nash describes Garena as a "millennial company with a big '90s generation".

If you were to line up all of Garena's employees in a row by age and pick out the one that is right in the middle, that person would be 27 years old - someone born in 1990.

In fact, you would get someone like Jay Ng. Mr Ng, 27, is one of the 5,000 employees that make up Garena's youthful and loose-limbed workforce, 550 of whom are based in Singapore.

Bespectacled, lean and mostly seen in his navy-blue hoodie, the product manager for League of Legends Singapore, a multi-player online battle arena PC game that Garena publishes, left an investment banking position at a German bank to work at Garena.

Read also: This voice-controlled game has everyone howling with laughter

"What I love about Garena is that even though we have grown tremendously over the years, we still retain our startup culture, where the people are passionate about what they do and are given the freedom to stay creative," Mr Ng says.

Just for context, the median age of Singapore's resident labour force in 2016 was 43. But while Garena's median employee age of 27 might sound incredibly young, it fits right in alongside its tech peers. A 2013 Payscale survey found that the median employee age for Facebook and Epic Games was 26, Zynga's was 28, and Google's was 29. In comparison, the workforces at older tech firms were Generation X-ers - IBM Global Services had a median workforce age of 38 and Dell's was 37.

Like Garena, tech companies that are known for engaging their millennial employees and are among the top firms millennials want to work at include Google, Amazon, Buzzfeed and Netflix.

Garena started out in 2009 in a small, three-storey vintage shophouse on Murray Terrace. Today, the Singapore-based Internet company is reportedly valued at more than US$3.75 billion.

Founded by Chinese entrepreneur Forrest Li, Garena provides gaming, e-commerce and payments services across South-east Asia and Taiwan. In its eight years of existence, it has attracted big-name investors including Temasek Holdings, Tencent and Khazanah Nasional, raising from them more than US$172 million in venture capital.

Garena might be a behemoth backed by other behemoths, but it is intent on behaving like a startup, which goes some way towards keeping its millennial employees engaged.

Tan Siwei, Garena's 31-year-old senior manager for corporate affairs, says: "It is heartening to know that the company's culture has remained the same - one that exudes a strong startup DNA of agility and nimbleness, with humble and brilliant people working together with a common goal in mind."

It helps, too, that Mr Nash, Garena's president and a member of the leadership team, is a youthful 38-year-old. That might make him a decade older than most of his millennial colleagues, but that would only have been the median age at Oracle, according to the 2013 Payscale survey.

Asked what it means to be a millennial company, the American says: "The first and most important word is 'authenticity'."

The former head of South-east Asia at growth equity firm General Atlantic (which, notably, is an early investor in Garena), explains that while Baby Boomers appreciate quality and Generation X value trust, millennials (or Generation Y) seek authenticity. They want to know whether a company or cause is true to its values or principles before lending it their support.

What also helps is that Garena offers the very services that hyper-connected and indie-centric millennials find appealing.

"We want to be the company that gamers love. The vast majority of business for us is e-sports. Entertainment plays an important role in our lives. I feel proud that part of Garena's business is about creating joy for people and bringing them together," Mr Nash says.

There is also Shopee, Garena's mobile marketplace app that lets users buy and sell items through their smartphones. According to Mr Nash, this app offers users the opportunity to explore "millions of sellers with really unique, authentic products", such as crafts made in villages in Jakarta.

Even as other firms grapple with understanding their younger employees, Mr Nash says that Garena has found a way to constructively manage its millennial talent.

The solution, paradoxically, is to not "manage" them.

"When it comes to managing millennials, there is no concept. Millennials don't want to be managed; they want to be inspired and feel that the work they're doing is authentic to their interests and passions. The feeling that you've found something that you're uniquely qualified to do is a great source of satisfaction in life."

Carolyn Foo, an iOS software engineer at the company, knows that feeling.

She is one of only 10 female software engineers, and 160 engineers altogether, in Garena. Her role is to maintain and develop the Garena mobile platform app for iPhone users, for which her passion is manifestly clear.

The 27-year-old says: "In five years, I would still want to be a software engineer working with talented people and through my work, serving users from all over the world."

In particular, the young, dynamic and liberal culture of Garena appeals to Ms Foo.

"It gives a lot of freedom in what tools or frameworks you use to deliver results. It is also fast paced and tries to optimise learning. Each team runs a weekly sharing session, where new technologies are discussed."

Garena is also not afraid to empower its young employees and place them in decision-making roles. Mr Nash says that among other things, promotions, decision-making and professional growth, happen faster at Garena.

"We want to promote people as quickly as their leadership capabilities. In some ways, when someone is not getting promoted quickly, it's more the fault of leadership, because we haven't created enough opportunities for him to problem-solve or give him knowledge."

Mr Nash acknowledges that while younger hires have less work and life experience, they bring to the table very innovative ideas as they often view the world differently, allowing them to conceptualise out-of-the-box solutions and offer a fresher take on things.

"At the same time, we also aim to groom these young talents by creating a conducive environment for on-the-job learning, allowing them to accelerate their career and personal development as they grow with the company."

The company may be onto something. A Gallup survey of 1,700 US workers found that millennials prized the "opportunity to learn and grow" above all else in a new job.

Mr Nash says: "Navy Seals are often given opportunities in their 20s. Why can't do we that in the workplace? There is no better retention tool than creating opportunities for people to grow and learn."

Harrison Tan, 27, a management associate (MA) at Garena, is experiencing just that sort of rocket-fuelled progress. As part of the MA programme, he had the chance to work short stints at various departments from Shopee to gaming, gaining an expansive window into the business in just two years. He remembers that when he was "just an intern", he was asked to travel to Malaysia himself to work with the local team to run the country's first League of Legends tournament and exhibition.

He says: "What surprised me was the level of trust and freedom they gave me to do what I want, which helped me do my job better and motivated me. This has shaped the way I deal with my own team members, and that is to be generous with the amount of trust I give them."

Mr Tan is now senior associate for corporate affairs, having graduated from the programme in January. He says: "The MA programme provided me with extensive regional exposure. Travelling to Garena's various regional offices and working with our highly-localised teams has given me unique insights into various consumer habits and preferences around the region - something I never thought I would be doing straight out of college."

In five years' time, the finance graduate hopes to be managing a key business area in Garena, be it in product development, e-commerce, payments or gaming.

With all the talk about letting millennials run the show at Garena, one wonders if you can get too old to be at a such a company. But group president Mr Nash firmly disagrees.

"We don't judge our employees and potential hires based on age. Instead, we encourage diversity at work by committing to fair, transparent and merit-based human resource practices, so age is hardly a factor."

He adds: "I prefer to think about the myriad experiences that different individuals can bring to impact Garena's culture in a positive way. We believe the real advantage for any organisation today is diversity. We want to build a workforce that is reflective of the dynamic Greater South-east Asian region we operate in."

Over at Garena, Mr Nash points out that most of its leadership, which is a team of 11 senior executives, are under 40 years of age. This makes sense, he says, because the company's customers are also below the age of 40.

But Mr Nash says that as Garena grows, its talent profile will naturally broaden to include "more experienced individuals", on whom Garena will rely to play the role of internal mentors and offer insights into industry best practices.

He says: "They would be invaluable to coaching first-time managers in leadership, communication and negotiation skills, for example."

In order to understand the average employee at Garena, it helps to look at Mr Nash's own motivations. In 2015, when he was asked by Garena's founder Forrest Li - with whom he had attended business school at Stanford - to join Garena as group president, Mr Nash had been scheduled to move back to New York to work directly for William Ford, General Atlantic's CEO.

Mr Nash says: "William is not just one of the best investors in history, but a phenomenal human being, a great friend, and elder brother. To have the chance to work directly with him was wonderful. Only an invitation from Forrest to become his partner could have let me turn that down."

The opportunity to tinker and build at Garena also beckoned. "I grew up surrounded by Lego. One of my favourite classes in school was architecture and carpentry. I was a scientist in college. I worked for Microsoft. I always had a passion for tech and building things."

It's been two years since Mr Nash joined the Internet company, and he believes the same thing as the many millennials who work there: "We've stayed faithful to the kind of business we want to build."

This could soon change. Garena has been speculated to be planning an initial public offering (IPO) in the US for about a year now, although the company would never comment on it. If an IPO were to happen, Garena will be thrust under the glare of a harsher spotlight. There, it will have much less leeway to miss targets, and may find it a challenge to remain the nimble, millennial-friendly startup that it is.

This article was first published on Mar 25, 2017.
Get The Business Times for more stories.