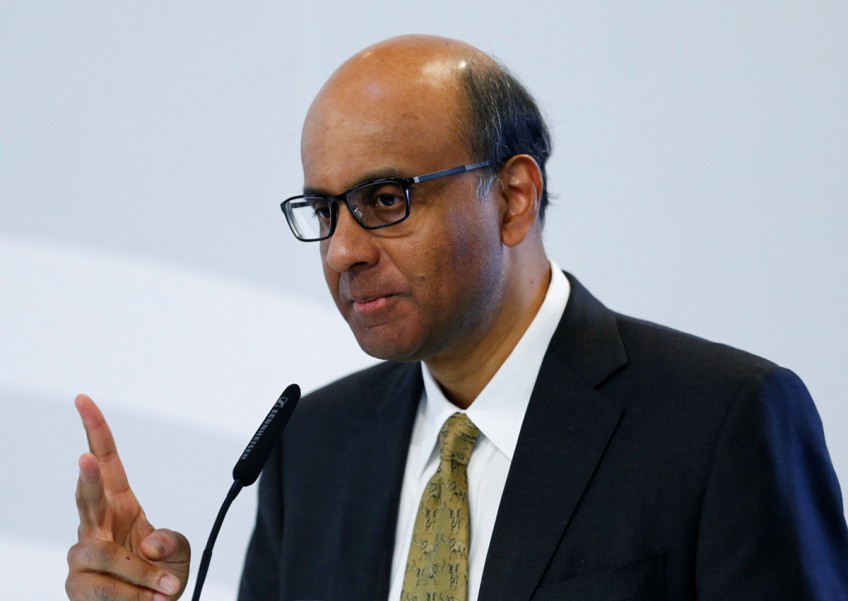 Deputy Prime Minister Tharman Shanmugaratnam said in Parliament on Feb 20 that the number of ATMs in Singapore grew by 65 per cent in the 10 years to 2015.
Reuters

Singapore is at the forefront of the global effort to move towards being cashless.

The Government's stated strategy is to maximise the use of digital-payment systems and move away from cash to reduce costs.

Yet the use of cash remains popular in the city-state. Cash in circulation in Singapore is 8.8 per cent of the gross domestic product (GDP), compared with 4.4 per cent in Australia and 2.12 per cent in Sweden.

Cash remains favoured because of merchant barriers to the adoption of electronic payments.

Even globally, the use of cash cannot be dismissed. ATM cash withdrawal volumes rose by 7 per cent in 2014 with a total of 92 billion withdrawals made, says the Global ATM (automated teller machine) Market and Forecasts to 2020 report by Retail Banking Research (RBR).

The increase in ATM usage worldwide is forecast by RBR to outpace the growth in the installed base of ATMs between 2015 and 2020, with withdrawals reaching 128 billion, indicating that the appetite for cash remains strong.

In western Europe alone, about 2.2 trillion euros (S$3.3 trillion) in cash is projected to be used for payments in 2020; in 2015, the figure was 2.1 trillion euros, says the PYMNTS.com Global Cash Index for the second quarter of 2016.

Cash is king also in Japan. Many shops and restaurants take only cash, despite the country's advanced technology infrastructure.

As at the end of last October, cash was used there in 80 per cent of transactions by value, and 101 trillion yen (S$1.27 trillion) was in circulation, says PYMNTS.com.

These statistics are indeed surprising, given the energy devoted by many countries to cutting back on the use of cash.

So why does cash dominate, even in advanced economies such as Japan or Germany? At its most basic, cash is an efficient payment product.

Cash payments do not involve fees or commissions, including charges merchants have to pay for debit or credit cards. Settlement is also instant and expensive infrastructure or payment terminals are not required.

So it is time to ponder whether the problem was correctly defined in the first place.

Is eliminating cash really the solution or is it about injecting efficiency? Are there better alternative products to cash for the public?

To this end, the Government has ensured that there are various touch points that provide convenient sources of cash, including a large network of ATMs and cashback services.

Deputy Prime Minister and Coordinating Minister for Economic and Social Policies Tharman Shanmugaratnam said in Parliament on Feb 20 that the number of ATMs in Singapore grew by 65 per cent in the 10 years to 2015, and that 90 per cent of HDB households have local bank ATMs within 500m of their homes.

DBS and POSB run a cashback service with 7-Eleven, through which customers can withdraw up to $80 from the convenience store's outlets.

The drawback is that customers have to first purchase an item using their ATM, debit or credit cards before they can use the service.

Even Uber, which prides itself on its convenient credit-card payment system, has allowed the use of cash for its ride-hailing service in Singapore to attract seniors or students who may not have credit cards.

This follows other markets in the world, including several cities in India, the Philippines, Malaysia and Indonesia.

However, more can be done to ensure that the elderly and less mobile in Singapore society have easier access to cash.

For example, in newer housing estates, ATMs may be located further than the average of 500m from people's homes. In many areas, small provision shops and minimarts are closer to residents than the ATM machines are; these outlets can be used to dispense cash to the elderly to reduce the need to go further.

The service will also benefit the shops because they can circulate their cash, cutting back on the amount they need to physically bank in.

This cash-dispensing service can be further extended to caregivers of the elderly or social workers who tend to their needs.

For sure, the government is determined to move forward towards cashlessness, especially given that the social cost of cash and cheques is around 0.5 per cent of GDP, or about S$2 billion a year.

But for the moment, the use of cash is not going to disappear, and a preference for its use needs to be accommodated.

The writer is CEO of soCash, a Singapore-based fintech company that aims to improve cash distribution and liquidity management by creating the largest cash network in the world powered by mobile devices.

This article by The Business Times was published in The New Paper, a free newspaper published by Singapore Press Holdings.