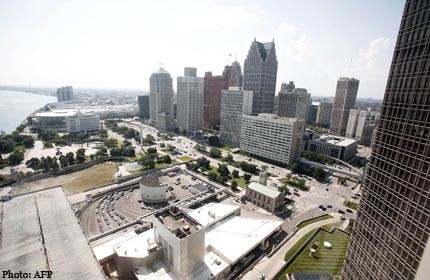 While his union sought a court injunction Friday to stop the proceedings and protect their retirement benefits, firefighter Frank Dombrowski resigned himself to the inevitable.

"Basically we're screwed," Dombrowski, 48, said as he stood watch over an isolated corner of the city where thousands of abandoned buildings regularly go up in flames.

Built in 1907 when Detroit was a hotbed of industrial innovation about to put the world on wheels, it now houses a rickety fire truck that has more than 100,000 miles (160,000 kilometers) on its odometer.

"There is no central air and the basement floods," said Dombrowski, who had shut the doors against the oppressive 96 degree Fahrenheit (36 degree Celsius) heat.

Like many life-long Detroiters, Dombrowski blames the city's woes on decades of mismanagement, bad decisions and worse luck.

"I'll tell you what killed the city - bussing back in the 1970s," Dombrowski, who grew up on Detroit's east side, told AFP.

Detroit was already experiencing white flight to the suburbs after the devastating 1967 race riots. The integration of public schools pushed more people out, he said.

As the population and tax base shrank, city services got worse and worse and the gulf between the city and the suburbs got wider and wider.

Motor City then saw its main employers go through round after round of mass layoffs as auto factories were automated or outsourced and Asian competitors siphoned away market share.

Once the fourth largest US city, Detroit has seen its population shrink by more than half from 1.8 million in 1950 to 685,000 today.

"The economy and Kwame Kilpatrick finished it off," Dombrowski said, referring to the 2008 financial crisis that sparked a lengthy downturn and Detroit's former mayor who was recently convicted of federal bribery charges.

His theory is backed up by the numbers: Detroit's population has fallen by 28 per cent since 2000.

The city has been so strapped for cash that nearly half of the streetlights don't work.

A shrunken police force has been unable to clamp down on rampant crime.

Just 8.7 per cent of crimes are solved and the average response time is 58 minutes.

Only a third of the city's ambulances work.

Frustration was evident among city employees interviewed outside the Coleman Young Municipal Building, which was built during the 1950s when the city was thriving.

"The city government is very inefficient," acknowledged one city employee, who asked not to be identified for fear of retaliation.

"There's all kinds of overlapping departments, which means you can't get anything done."

But there are pockets where the city is showing new signs of vitality.

In midtown - home to Wayne State University, the Detroit Institute of Arts, two hospitals and the main branch of the Detroit Public Library - new boutiques and businesses are cropping up.

Rachel Lutz, 33, said she wanted to tap into Detroit's emerging art scene when she opened her chic boutique, The Peacock Room, two years ago. Business was so good, she opened another one around the corner.

The limestone-fronted Park Shelton building where her shops are located is also now her home. She said there are about 400 residents in the mixed-use building and a waiting list of about 200 more.

"We live in a bubble," she said, explaining that the area is policed by private security patrols from Wayne State, the art museum and the hospitals.

While the bankruptcy will undoubtedly hurt city workers and retirees, "I don't think it's going to affect me on any intimate level," Lutz said.

"The bankruptcy could be a step in the right direction," said Llana Williams, 32, who works at Wayne State University.

"I know there have been bad decisions made in the past, but I don't want to think about them because I just get angry."

Alexandra Gallagher, 16, lives in the suburbs and was visiting the main library to look at old newspapers with her grandmother Friday.

"I think Detroit is a beautiful city," she told AFP. "I hope Detroit gets better."