SUZHOU, China, Dec. 5, 2018 /PRNewswire/ -- On November 23, 2018, the cultural exchange "Dialogue between Kunqu and Tango" was held in Buenos Aires, Argentina. In the historic Guemes Gallery, two Kunqu artists from Suzhou Kunqu Theater, Shen Guofang and Wu Jiajun, and Argentinian tango artists performed a Chinese classic drama "Peony Pavilion", which let audience experience the blend of different culture. The event was hosted by the Information Office of Suzhou Municipal Government and organized by the Publicity Department of Kunshan Municipal Party Committee. Enrique Avogadro, Minister of Culture of Buenos Aires, made a special trip to the ribbon-cutting ceremony at the grand opening. 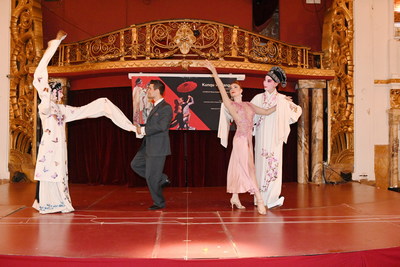 Kunqu of Suzhou collides with Tango of Argentina, showing a different kind of Peony Pavilion.

A total of 60 photos, taken by photographer Zhao Hui, were exhibited, including comparative photos of Kunqu and Tango, Suzhou and Buenos Aires. "Kunqu is elegant and restrained, while Tango is full of passion and unconstrained. Putting the photos of Kunqu and Tango together makes it easier to reflect the characteristics of the two art forms." Zhao Hui hoped that this exhibition would present the most influential works of art from the East and West to the audience, in order to show the unique charm of cultural dialogues. He said that during the filming process, the President of Argentina, Macri met with him at the official residence and encouraged him to tell the story of the friendship between the two countries and autographed the album.

In recent years, as the symbol of Suzhou culture, Kunqu has been continuously introduced to the United States, Britain, Belgium, Italy, Germany, France and other countries by the Suzhou Kunqu Theatre. The youth version of Peony Pavilion has been performed 48 times abroad. It focuses on Suzhou's confidence and strength of traditional culture and the achievements of the 40th anniversary of reform and opening-up. Nowadays, the prosperity and development of culture cannot be separated from the dialogue and exchanges with various civilizations of the world. For a well-known city with open economy at home and abroad, the external publicity of Suzhou has created a good atmosphere of public opinion for its economic development, shaping and enhancing the image and popularity of Suzhou.