Award winning young female songwriters from across the globe collaborate on a heartwarming original song for Thanksgiving release, despite never having met in person. 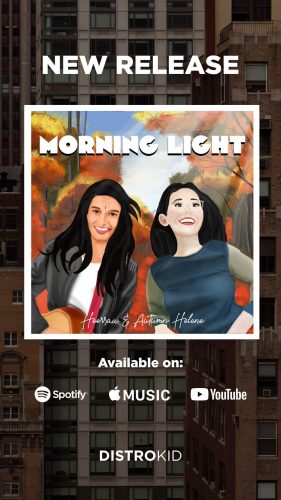 Heerraa shared, “To think that here we are, two young female artists from two entirely different continents, meeting and connecting through music, and then ultimately becoming friends and creating art together.” She explained, “I write positive songs, which typically have lessons, a purpose, a meaning and a solution. Autumn and I admired each other from afar and became fast friends through this process.” Added Helene, “This has been such a fun experience. Heerraa and I have worked together via Zoom video technology, for many nights over the last few months, to co-write and create an original song about hope that can have a positive impact on the world and bring people together.”

Helene released her first original song “You Won’t Regret A Thing” when she was still 12 years old, in response to being bullied, and the song was selected for use in the new American dark fantasy thriller television series “Hunting Jessica.” She writes songs that she hopes will make people think, feel and act. She has a new single being released on Halloween 2021 entitled “Ghost,” which was written about the struggles of managing anxiety in these pandemic times, with a goal to bring awareness and reduce the stigma surrounding mental illness. The song was written, produced, recorded and sung by Helene.
“Morning Light,” co-written and produced by Heerraa and Autumn Helene, is scheduled to be released in time for Thanksgiving day 2021. The song's theme, Heerraa explained, “is about growth and embracing who you are. The central message of the song is about how life is a blessing, despite the challenges or discomforts you might experience.” Helene added, “and the song reminds you how every day is a new opportunity for you to live your best life.”

She is a member of the American Songwriters Association, Billboard 500 Club, ISSA, and West Coast Songwriters Association and is an admin for multiple music groups on social media. Helene is an ISSA worldwide representative, has been GRAMMY considered for her song “Stars Align,” and has a song placed in television show “Hunting Jessica.” Helene has received numerous songwriting awards, including most recently: 2021 ISSA Young Adult Artist of the Year (Bronze), 2021 Best New Artist Award in the Rampage Music Awards. Helene is working on a fully self produced album for release in 2022.

About Heerraa: https://linktr.ee/HeerraaOfficial
Heerraa is an international singer-songwriter and performer from Malaysia who is changing the world with music. She was featured in Hitz fm (Malaysia), Ahenfo Radio (Denmark), Indie Rampage Radio (USA), Mark Skin Radio (USA), Casey Radio (Australia), Epic Radio (Spain), Super Sound Radio (Scotland) and more. An award-winning performer, Heerraa has also received many awards, most recently: “Entertainer of the Year” at the Rampage Music Awards (USA), Female Single of the Year (Gold) at the ISSA Awards (USA). Featured on Simulacra 2's Original Game Soundtrack, Heerraa’s song “The Girl Who Loved” has received worldwide recognition, most notably in Germany,

Heerraa is also one of the co-founders of the international youth movement, Ascendance. Alongside her co-founders, Heerraa received The Diana Award for Young Changemakers (UK) for their work of engaging Gen Zs to discover their passions and careers, set holistic goals and well as develop the right values and mindset to achieve success.