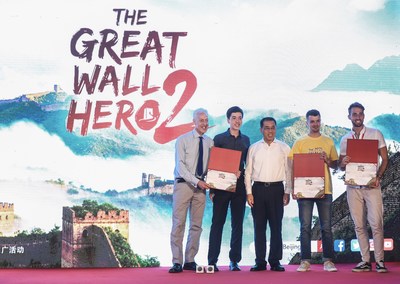 Mr. Yu SONG, Director-General of Beijing Municipal Commission of Tourism Development, delivered the opening speech and reminisced about the highlights of overseas marketing in recent years. He added that this campaign was to promote the city planning of Beijing and inbound tourism in response to the national development strategy "Belt and Road Initiative". It served as a public showcase of the Beijing cultural conduits of the Great Wall, the Grand Canal, the Western Hills and Yongding River, and the cultural heritage and travel resources along the Central Axis.

To encourage cultural and tourism exchange in the EU-China Tourism Year as well as the Canada-China Year of Tourism 2018, Sam Kolder, a top-level travel influencer from Canada, and Stuart Wiggin, a Beijing-based British comedian, were chosen as the Great Wall Heroes to explore Beijing. Their travel experiences in places like Mutianyu Great Wall, Shichahai of the Grand Canal and the Central Axis were reported and shared in real time on social media platforms including Facebook, Twitter and Instagram. This is only the beginning of the exploration for cultural values in the "Three Belts, One Axis" of Beijing. William Lindesay, the first foreigner to traverse the Great Wall on foot, and his family were also invited to the event. Lindesay and his son Tommy gave a presentation on the culture and conservation of the Great Wall.

At the end, Mr. Ning WANG, Deputy Mayor of Beijing, awarded Lindesay's family and the Great Wall Heroes certificates of honor for their achievements. Besides, Mr. Peiyan YIN, Deputy Secretary of Beijing, drew 6 lucky winners out of over 1600 applicants for a free Beijing tour.