From domestic leagues to the major league with 4D videos "4DReplay" 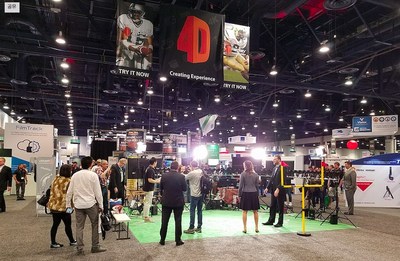 4DReplay’s technology goes beyond the space-oriented video filming method to record the movements of the subject from a 360-degree angle, allowing any moment of the video to be replayed from any angle.

CEO Hongsu Jung said, "The difference in scale between the Korean and global sports markets is significant, especially in terms of broadcasting rights. So, to make it easier for us to enter overseas markets, we decided to establish our headquarters in Silicon Valley."

As Jung had hoped, 4DReplay has already grown beyond the Korean market and is knocking on the doors of foreign markets. The company's video technology, which was put into action for the first time at the 2014 Incheon Asian Games, is being applied not only in Korean professional baseball but throughout the United States and Japan as well.

At the core of 4DReplay's technology is the function that allows users to watch the video of their choice whenever they want. This technology goes beyond the space-oriented video filming method to record the movements of the subject from a 360-degree angle, allowing any moment of the video to be replayed from any angle.

4DReplay is now recognized in other countries as well. Having filmed a few San Francisco Giants games and done a Japanese professional baseball game broadcast, the company will soon be signing contracts with sports associations and broadcasting companies in various countries (United States, Japan, and European countries).

The main reason for 4DReplay's growing visibility in the industry is its unparalleled technology, which compares favorably in terms of quality and performance than that of the Israeli startup that was acquired by Intel in August 2016. According to 4DReplay, it is capable of creating and playing videos in 4K resolution in just five to ten seconds, while it takes minutes for its competitors to do the same.

Breaking out of the domestic market and going global

4DReplay moved its headquarters to the United States for one simple reason: to expand its foreign business volume. Soon, the company hopes to provide its services to popular sports broadcasting companies in numerous other countries, including those involved in baseball, basketball, and ice hockey in the United States and in soccer, cricket, golf and rugby in European countries.

In addition to diversifying the sports events the company covers, Jung is looking into a wide range of business models. Starting next year, 4DReplay will begin offering its services via mobile application. Wireless carriers and broadcasting companies are working to find ways to provide all the support needed for 4DReplay's filming, including set construction and technological support, as one comprehensive package.

In the near future, 4DReplay plans to strengthen its cooperative relationships with camera manufacturers with the aim of enhancing the quality of its videos.