MACAU, CHINA - Media OutReach - J une 15, 2018 - Martial arts superstar Donnie Yen and actress / international supermodel Du Juan have teamed up with one of the world's most influential photographers, Nick Knight , for City of Dreams' stunning new brand campaign. Known for consistently challenging conventional notions of beauty in his ground-breaking creative collaborations with fashion icons and labels such as Kate Moss, Alexander McQueen and Comme des Garçons, Knight is a world renowned visionary as well as director of SHOWstudio.com. He was also the official portrait photographer for Queen Elizabeth and Prince Charles for the Queen's 90th birthday celebrations. This is the first time Knight has collaborated with a hospitality brand. 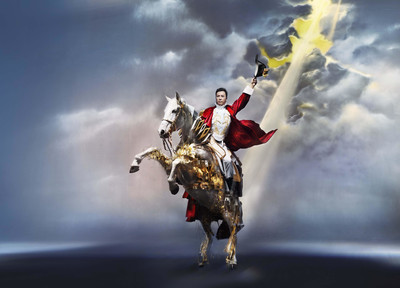 The image of Donnie Yen is inspired by classical paintings of Napoleon Bonaparte, the 19th -century Emperor of France, with the famed 'Napoleon at the Saint-Bernard Pass' by artist Jacques-Louis David depicting the Emperor in all his glory atop a white Arab stallion. 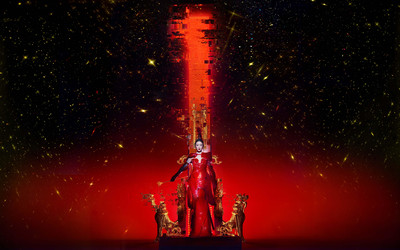 Du Juan plays an Empress dressed in a sophisticated China rouge gown sitting on a throne, radiating the spirit of power and victory. The key visual is inspired by the 15th-century painting 'A Muse (Calliope?)' by Italian Renaissance artist Cosimo Tura.

The trailblazing campaign shot in the UK encapsulates the sensation of personal triumph that is synonymous with City of Dreams, through a creative concept featuring iconic portraits of key figures in history interpreted by Donnie Yen and Du Juan . The striking visuals combine elements of East and West, blending tradition with a modern twist to boldly personify power and heroism.

The image of Donnie Yen is inspired by classical paintings of Napoleon Bonaparte, the 19th century Emperor of France, with the famed 'Napoleon at the Saint-Bernard Pass' by artist Jacques-Louis David depicting the Emperor in all his glory atop a white Arab stallion.

Du Juan plays an Empress dressed in a sophisticated China rouge gown sitting on a throne, radiating the spirit of power and victory. The key visual of Du Juan is inspired by the 15th century painting 'A Muse (Calliope?)' by Italian Renaissance artist Cosimo Tura.

"It is always such a pleasure to work with talented and driven people, and to do so on the campaign for City of Dreams, home of the one of a kind Morpheus hotel, which is reshaping the concept of hospitality for the modern world, was doubly exciting," said Nick Knight . "The bold and revolutionary design by the revered Zaha Hadid served as a constant source of inspiration, while Donnie Yen and Du Juan are great actors, who worked really hard to bring the images to life."

Donnie Yen added: "I am an experienced horse rider, however shooting this particular photo portraying Napoleon on a white horse was extra memorable.  Donning the outfit and being on the dramatic set built by Nick's team, I was instantly transported to a world of grandeur."

Du Juan said: "I am honored to be part of the 'dream' team behind this sensational shoot . I felt very confident sitting on the throne as the Empress, and am delighted with the results: the images are truly spectacular!"

The cornerstone of City of Dreams' Phase III development and the world's first free-form exoskeleton-bound high-rise architectural composition, Morpheus hotel will be unveiled tomorrow, June 15. Known as 'The Icon of the New Macau', the architecturally unique masterpiece was designed by the late Dame Zaha Hadid DBE -- the first woman ever to be awarded the prestigious Pritzker Architecture Prize.

The 'making-of' video of the brand campaign can be downloaded at: www.cityofdreamsmedia.com/BehindTheScene-CityofDreamsBrandCampaign.mp4

This press release contains forward-looking statements. These statements are made under the "safe harbor" provisions of the U.S. Private Securities Litigation Reform Act of 1995. The Company may also make written or oral forward-looking statements in its periodic reports to the U.S. Securities and Exchange Commission (the "SEC"), in its annual report to shareholders, in press releases and other written materials and in oral statements made by its officers, directors or employees to third parties.

Statements that are not historical facts, including statements about the Company's beliefs and expectations, are forward-looking statements. Forward-looking statements involve inherent risks and uncertainties, and a number of factors could cause actual results to differ materially from those contained in any forward-looking statement. These factors include, but are not limited to, (i) growth of the gaming market and visitation in Macau and the Philippines, (ii) capital and credit market volatility, (iii) local and global economic conditions, (iv) our anticipated growth strategies, (v) gaming authority and other governmental approvals and regulations, and (vi) our future business development, results of operations and financial condition. In some cases, forward-looking statements can be identified by words or phrases such as "may", "will", "expect", "anticipate", "target", "aim", "estimate", "intend", "plan", "believe", "potential", "continue", "is/are likely to" or other similar expressions. Further information regarding these and other risks, uncertainties or factors is included in the Company's filings with the SEC. All information provided in this press release is as of the date of this press release, and the Company undertakes no duty to update such information, except as required under applicable law.

The Company, with its American depositary shares listed on the NASDAQ Global Select Market (NASDAQ: MLCO), is a developer, owner and operator of casino gaming and entertainment casino resort facilities in Asia. The Company currently operates Altira Macau (www.altiramacau.com), a casino hotel located at Taipa, Macau and City of Dreams (www.cityofdreamsmacau.com), an integrated urban casino resort located in Cotai, Macau. Its business also includes the Mocha Clubs (www.mochaclubs.com), which comprise the largest non-casino based operations of electronic gaming machines in Macau. The Company also majority owns and operates Studio City (www.studiocity-macau.com), a cinematically-themed integrated entertainment, retail and gaming resort in Cotai, Macau. In the Philippines, a Philippine subsidiary of the Company currently operates and manages City of Dreams Manila (www.cityofdreams.com.ph), a casino, hotel, retail and entertainment integrated resort in the Entertainment City complex in Manila. For more information about the Company, please visit www.melco-resorts.com.

The Company is strongly supported by its single largest shareholder, Melco International Development Limited, a company listed on the Main Board of The Stock Exchange of Hong Kong Limited and is substantially owned and led by Mr. Lawrence Ho, who is the Chairman, Executive Director and Chief Executive Officer of the Company.

About City of Dreams

City of Dreams is an integrated entertainment resort that has established itself as a premier leisure and entertainment destination in Macau. Located in the heart of Cotai in Macau, it combines electrifying entertainment, a diverse array of accommodation, regional and international dining, designer brand shopping and a spacious and contemporary casino. The resort brings together a collection of world-renowned brands including Grand Hyatt and Dragone to create an exceptional entertainment experience that aims to appeal to a broad spectrum of visitors from around Asia and the world. City of Dreams features a 420,000-square-foot casino with approximately 475 gaming tables and approximately 670 gaming machines; over 20 restaurants and bars; an impressive array of some of the world's most sought-after retail brands; "The House of Dancing Water", the world's largest water-based extravaganza showcased in the purpose-built Dancing Water Theater, represents the live entertainment centerpiece of City of Dreams' overall leisure and entertainment offering. A comprehensive range of accommodation options at City of Dreams include Nüwa offering approximately 300 guest rooms, The Countdown offering approximately 300 guest rooms and Grand Hyatt Macau offering approximately 800 guest rooms. In addition, Morpheus, the new hotel at City of Dreams designed by the late legendary architect Dame Zaha Hadid, is expected to commence operation on June 15, 2018, offering approximately 770 rooms, suites and villas. For more information please visit: www.cityofdreamsmacau.com (Official Website) and www.cityofdreamsmedia.com (Media Portal). For The House of Dancing Water information, please visit www.thehouseofdancingwater.com (Official Website) and www.thehouseofdancingwatermedia.com (Media Portal).

12 Chinese New Year superstitions to follow for a big dose of luck
5 style tips inspired by local actress Zoe Tay
Relationship advice: My BF still uses dating apps. How should I talk to him about it?
McDonald's Japan launches its Adult Cream Pies, and the verdict is in

Looking for custom furniture? Check out these handpicked vendors
12 modern HDB toilet design ideas you can copy to make your bathroom look bigger
These are the trending colours to use in your home in 2020
Your spring cleaning checklist for CNY 2020