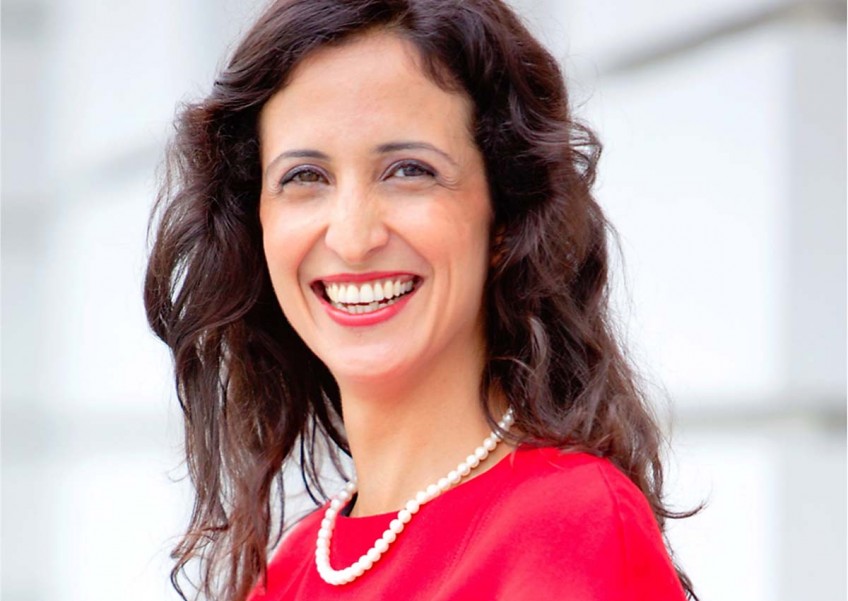 Her digital start-up supports female entrepreneurs, helping them with expertise and crowdfunding.

She concedes that she could get immense support from her network by pitching Woomentum as a social enterprise, but she is adamantly against it.

"I can easily get at least $200,000 to operate (from firms doing corporate social responsibility projects), pay myself a salary and be comfortable," Ms Aouri said.

"But this is not doing women any good. It enforces the impression that women are less."

Born and raised in Tunisia, the mother of two girls, aged four and six, moved to Singapore with her husband in 2011.

She described her venture as a combination of community question-and-answer site Quora and crowdfunding site Kickstarter for female entrepreneurs to support and mentor one another through different stages of their businesses.

Ms Aouri will be a panel member at The Future is Female seminar on April 8, organised by The New Savvy, a website that aims to improve financial literacy among women.

Having worked mostly in a male-dominated environment, the civil engineer said she never imagined that she would do anything gender-related.

At 24, she did her master's in engineering in Japan on a scholarship in 1999 and worked there for five years. She rose to a managerial position in a Japanese firm.

She said: "There was confusion every time I walked into a meeting, or when I put on the (engineering) outfit and helmet. They would ask, 'Are you here to take notes?'"

Ms Aouri returned to Tunisia in 2006 because she missed her family and wanted to give back to her country.

She started her own B2B consulting company advising Japanese and French engineering firms, and she launched the first mobile wallet technology platform in Tunisia in 2010.

But the Arab Spring protests hit too close to home, literally.

Living near the presidential palace, where most of the protests took place, she could hear "gunshots around the corner".

Ms Aouri, who had just given birth to her first child, Fuyubi (winter beauty in Japanese), and her husband decided to leave Tunisia. Her husband, who did his master's in Singapore, found a job here, and they relocated in April 2011.

Their second daughter, Suraya (named after her close Malay friend), was born here.

Describing her first two years in Singapore as the lowest point of her life, Ms Aouri said: "My husband had a plan, but I did not. Being a mother added to my identity, but it was not a switch from the identity I had before.

"I love my children, but I also love myself. And because I love them, I want to offer them the best of myself and my well-being lies in being able to make a change, to learn, to be positive."

And so Woomentum was born. So far, it has had four crowdfunding events, supporting 23 start-ups. It will launch in Vietnam next month.

"I want Woomentum and any other initiative that helps women, to succeed to the point where we don't need to exist any more. That is the world that I envision for my daughters."

This article was first published on March 27, 2017.
Get The New Paper for more stories.