- The news of Bithumb's announcement to open up Monero (XMR) deposits has sent its trading volume to an all-time high of approximately $239 million, increasing by 1,421% from the day before.

- The world media turns its attention on "the skyrocketing Monero prices after its listing on Bithumb."

SEOUL, South Korea, Sept. 25, 2017 /PRNewswire/ -- Market values of coins have rapidly fluctuated with the recent news that Bithumb, the biggest cryptocurrency exchange in Korea, would list Monero on its platform. 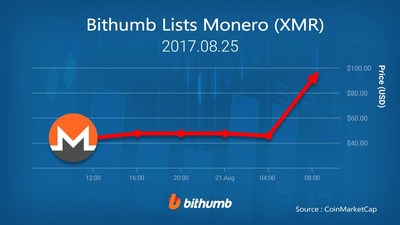 Monero—one of the most private and anonymous cryptocurrency—was listed on Bithumb (CEO Kim Dae-Sik/www.bithumb.com), the largest exchange in the world, this past month. The news has sent Monero's trading prices skyrocketing, as it increased by 83.6% compared to its closing price the previous day.

Last month, Bithumb announced its plans to hold a special promotion in celebration of the listing. The Monero markets responded positively to the announcement and started to change dramatically. According to a cryptocurrency information website called 'CoinMarketCap,' the trading volume of Monero increased by 1,421% in just one day, soaring up to $239,090,975. Its trading volume also doubled compared to the previous day, reaching to a record-setting $95.

Previously, the average trading price of Monero was between $44 and $49. However, due to a market downturn, its price plummeted to the mid-$30s in July. August brought a resurgence to Monero with the news that it would be traded on Bithumb, spiking its trading prices up to $95, a record-setting increase of more than $50. In terms of trading volume, this is approximately a 148.9% increase compared to the previous highest trading volume on May 24th, which was $96,042,620. The trading volume recorded its highest again in three months, tripling in volume.

Media all over the world are paying close attention to this market trend. Coindesk, a cryptocurrency information company, attributed the rising prices of Monero to Bithumb on the 21st saying, "the Korean exchange Bithumb dramatically increased the price of Monero with its listing," and mentioned Bithumb's influence on the world's cryptocurrency trading markets.

Monero, created back in April 2014, boasts strengthened anonymity, making it difficult to track accounts by using cryptography. Moreover, Monero does not have a maximum cap for mining, a factor that captivates the attention of miners. Based on the data given by CoinMarketCap, its aggregate market value is estimated to be $11,315,125,381 (06:00 September 15th), placing 8th in the entire cryptocurrency market. After the news of listing on Bithumb, its price continues to rally, drawing an upward trend on the graph.

Bithumb listed Monero (XMR) as its 8th coin on the 25th. Currently, its trading volume places 5th on the site, maintaining a price range between $79 and $88.