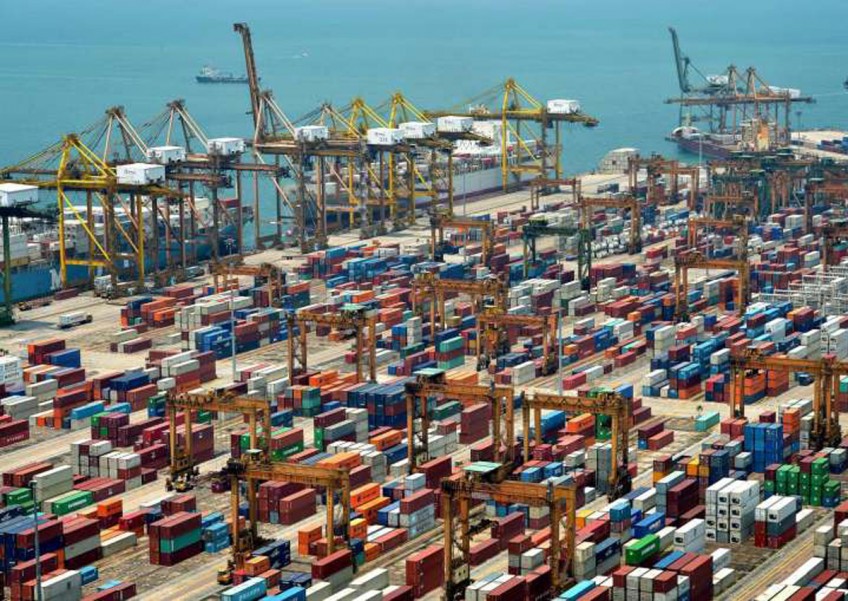 Still, the 0.5 per cent fall in non-oil domestic exports (Nodx) was significantly less than the 3 per cent contraction forecast in a Reuters poll.

According to trade agency IE Singapore data released yesterday, the slide was due to a drop in electronics Nodx which outweighed an increase in non-electronics Nodx. .

On a year-on-year basis, Nodx to all of Singapore's top 10 markets contracted last month, except for those to Japan, the European Union (EU) and Hong Kong.

Shipments to China, Singapore's top export market, fell for the fourth straight month, down by 8.7 per cent last month.

Exports to the United States, the Republic's third largest market, slipped by a smaller 2.2 per cent, after a 9.4 per cent dive in September.

"We remain cautious about the Singapore export outlook and maintain our 2015 Nodx forecast of a 1 per cent contraction. Based on September industrial output, we see some downside risk to third-quarter gross domestic product (GDP), and fears of a technical recession being revisited," Ms Ho said.

Official final third-quarter economic growth figures are due out in the coming days.

Electronics exports will likely stay weak through early next year, as the global personal computer industry remains in the doldrums, Dr Chua said. Weak global trade volumes and strict foreign labour policies may cause the Ministry of Trade and Industry to downgrade its current forecast of 2 per cent to 2.5 per cent GDP growth for this year as well as that for next year, to 1 per cent to 3 per cent growth, he added.

Month on month, the Nodx continued to rise, but eased from the seasonally adjusted 2.8 per cent growth in September to 1.1 per cent expansion last month.

Economists say the improvement may be due to a weaker Singdollar and a strong showing by pharmaceutical exports, which surged by 44.6 per cent year on year last month, after rising 6.5 per cent in September.

This masked declines elsewhere, including in electronics exports.

Excluding pharmaceuticals, the broader manufacturing sector was likely on a weaker footing, Nomura analysts Euben Paracuelles and Brian Tan said. They see full-year GDP growth of just 1.8 per cent, below the official forecast.

Although exports to China and the US are still declining, the magnitude of the decline has decreased, and exports to the EU have turned positive, they noted. Stronger demand ahead of the holiday season may pave the way for stronger growth in the fourth quarter, they said.