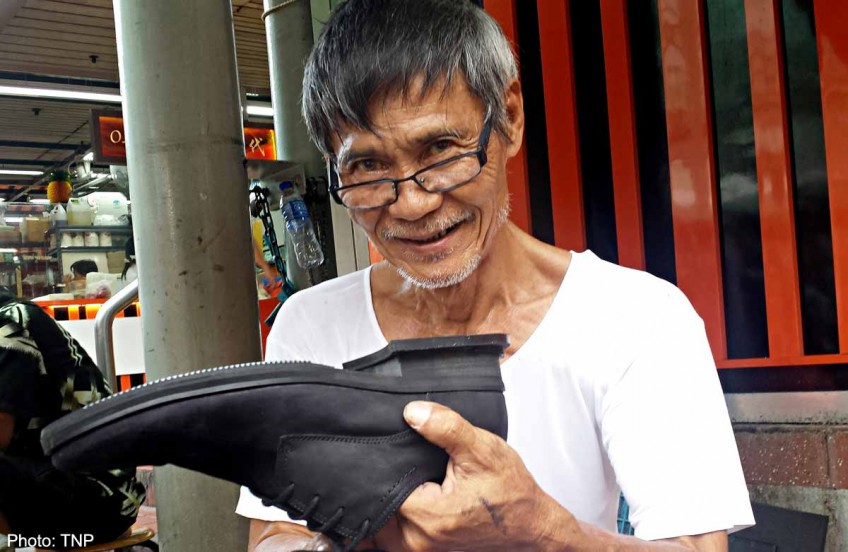 Armed with his trusty toolbox, cans of glue and spare rubber soles, he toils quietly amid the bustle near Chinatown MRT Station's Exit C.

In a slice of pedestrian walkway between OG department store and People's Park Complex, Mr Kay Ching Boh and other cobblers set up their makeshift stands every day.

In fact, the area has become informally known as Cobbler Square. At one time, there were as many as 20 cobblers lining the 50m stretch.

Now, there are only seven left.

"There are so few cobblers here. No competition now between us lah," says Mr Kay in Mandarin, laughing.

Even so, the 64-year-old cannot help but make light-hearted jabs at his competitors.

Says Mr Kay, pointing at another cobbler: "He mends shoes fast, but he uses brute force and doesn't do it properly. Not like me - I'm very careful."

The self-taught cobbler has been setting up shop there since 2005.

Previously, Mr Kay was a hawker stall vendor selling noodles in Chinatown, and he changed jobs as the long hours became unbearable as he got older.

From smelly shoes to impatient customers, these street cobblers have experienced them all.

But pass one of them a big bag of shoes to fix and they would rather turn you down.

"If it's too much to do, or too difficult, I won't accept the job," Mr Kay maintains. This is because he is most afraid of damaging his customers' shoes further. A bad testimonial and his reputation would be in tatters. "I'd rather spend more time and effort on each pair than hurry through it."

He relies on a steady stream of regular customers to eke out a living.

"If they like my work, they recommend me to others. I don't ask for big bucks, I don't put up ads. What I earn is enough," says the father of two.

But it is not an easy job.

He shows us several scars on his hands, caused by accidental cuts with a chisel knife, as proof.

It is a trade that is also slowly disappearing, thanks to the appearance of fix-it chains in shopping malls that do shoe repairs, and the changing habits of customers.

Says Mr Kay: "Maybe because people have more money to spend, they rather buy new shoes than repair old ones."

Some of the cobblers have also stopped returning to the area because of old age, he adds.

While there are not as many customers as before, they still return, primarily because of the lower prices.

Repairing a heel costs $3, and replacing damaged soles can go up to about $20, which is two times cheaper than what is offered in malls.

But the lower price is not indicative of poorer quality, he stresses.

"You see here," says Mr Kay while holding up a shoe he was repairing. "It's like new. We're all proud of our skills." He confesses that he does not know the branded shoes from the non-branded ones.

"It doesn't matter. I do the best I can for every type of shoes. If I spoil other people's things, I have to pay lah."

Mr Kay says he is satisfied from being able to serve his regulars.

"People will always want their shoes repaired and if they like my work, they come to me."

He is not about to disappear anytime soon as he enjoys his job.

"There's no rent to pay, and if the day goes bad, I'll just close shop. It's free and easy. "Until I drop dead, I will keep working here as long as I have hands and legs," he says.

1. Do not overpromise on what you can fix. If the job is too difficult, advise the customer to go elsewhere as you may lose customers in the long run if you damage their shoes.

2. Keep your tools sharp and watch out for injuries. Brute force with blunt tools may cause more harm than good as the thick rubber soles can be difficult to cut through.

3. Make sure you have extra pairs of slippers for customers to use while they wait for their shoes to be fixed.