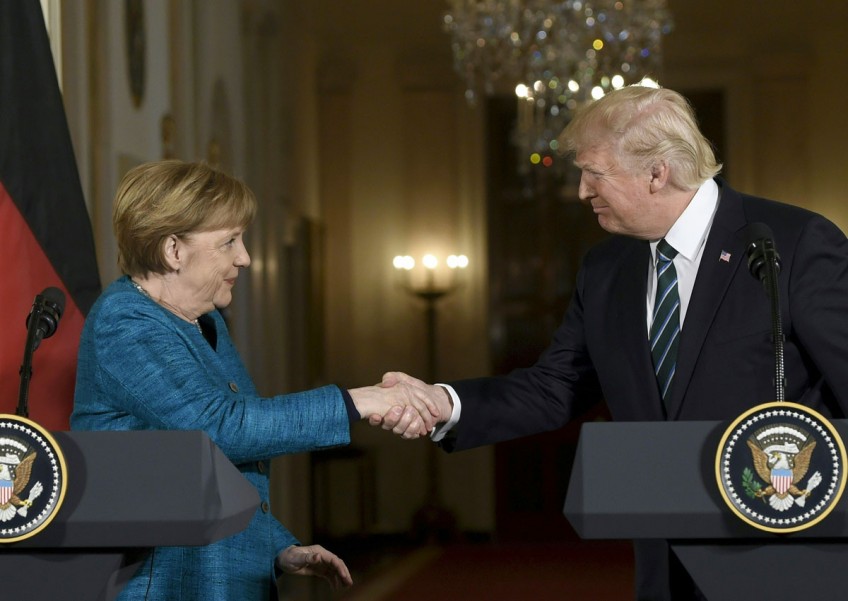 US President Donald Trump and Germany's Chancellor Angela Merkel shake hands after a press conference in the East Room of the White House March 17, 2017 in Washington, DC.
EMAS Offshore

NEWS over the weekend that offshore and marine (O&M) company Ezra Holdings has filed for US Chapter 11 bankruptcy protection in order to restructure its debts will undoubtedly be the main feature of trading in the early part of this week.

Although the news is not wholly unexpected and could already be discounted, there could be knee-jerk pressure on the O&M sector and spillover selling of the banks.

Otherwise, externally investors will likely look to Wall Street for direction and as far as hyped-up market-moving events go, it will be tough to top the adrenalin rush of last week when the US Federal Reserve, as universally expected, raised interest rates for the third time since the 2008 crisis while less expectedly so, signalled a more dovish stance on its rate path.

The signal that there was less to worry about the growth trajectory of the world's largest economy, the US, and that the Fed would stay on a similar pace of rate hikes versus a more aggressive step up, sent stocks on an upward March amid blossoming investor risk appetite.

The Singapore bourse reacted with zeal, scaling 19-month highs on last week's final two trading days. "The week ahead is unlikely to find the attention on the Fed diminish significantly, particularly given the set of Fed speakers due," said IG Markets strategist Jingyi Pan.

Several regional Fed presidents are set to take the mic this week. On Thursday, Fed chair Janet Yellen will present a keynote speech at a research conference in Washington while the Fed's Minneapolis president Neel Kashkari - the sole dissenter at last week's FOMC - will speak later at a luncheon event which observers expect to shed more light on the central bank's rate path that had triggered a fall in the US dollar last week.

The US is also due to release jobless claims and new home sales on the same day followed by manufacturing data and durable goods orders the next day. That aside, with relatively light economic data this week, equity markets may take the opportunity to catch their breath.

Apart from Ezra's news, several events that took place over the weekend could impact trading sentiment.

The first face-to-face meeting between the world's most powerful man and woman - US President Donald Trump and German Chancellor Angela Merkel - now dubbed the "Merkel Moment", was so unusually tense and awkward that it lit up social media but there wasn't much in terms of market-moving developments. Germany is one of several countries Mr Trump has accused of having an unfair trade advantage.

Mr Trump said he had confidence in the US-Germany relationship and vowed to fight for "fair" trade with Germany and other countries and denied that he was an "isolationist" but more of a "free" and "fair" trader. Mrs Merkel was mostly neutral, kept her stance neutral and stressed that the US must keep its commitments.

Finance ministers from industrialised and emerging-market economies met in Germany for a G-20 meeting, the first for US Treasury Secretary Steven Mnuchin.

The grouping among the world's top economic and diplomatic powers is closely watched as it sets the tone for global economic policy, and trading sentiments.

According to some reports, a weekend statement by the grouping had sent mixed signals on the issue of protectionism (versus it's all-out vehemence against such trade practice in last year's statement) amid pushback from the US under Mr Trump's "America First" policy.

For full listings of SGX prices, go to http://btd.sg/BTmkts

This article was first published on March 20, 2017.
Get The Business Times for more stories.