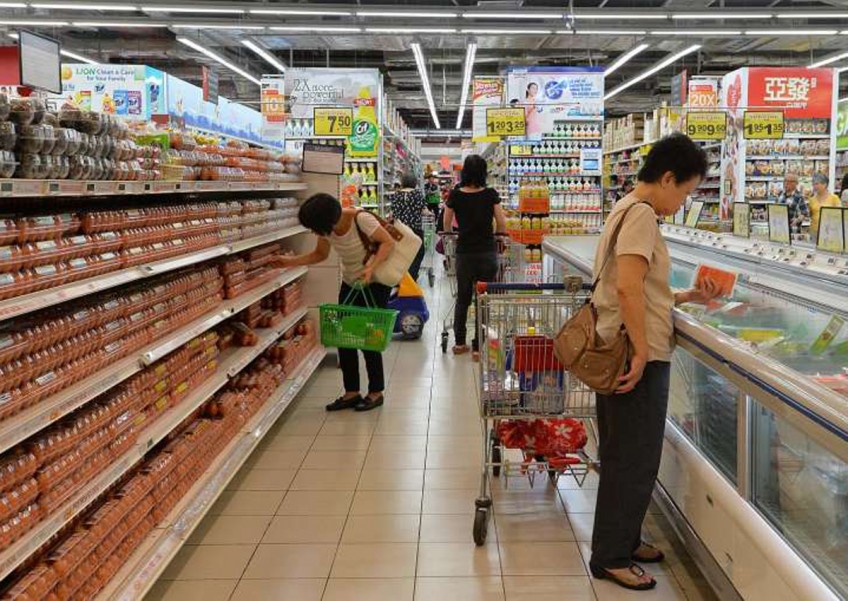 But core inflation, which strips out accommodation and private road transport costs - a better guide for everyday household expenses - continued to rise.

Despite the long stretch of negative headline inflation, economists do not consider deflation here as posing the deep economic risks that have plagued some economies such as Japan.

The usual suspects were behind the fall in prices: lower transport and housing costs.

Transport costs declined 1.7 per cent while housing and utilities dropped 4.3 per cent over the year.

The continued weakness in oil prices also affected the CPI, with the cost of oil-related items, such as electricity tariffs, falling by 10.1 per cent, said the Monetary Authority of Singapore (MAS) and the Ministry of Trade and Industry (MTI) yesterday.

The MAS and MTI said that external sources of inflation are expected to stay "generally benign, given ample supply buffers in the major commodity markets and weak global demand conditions".

"Oil prices for the whole of 2016 are expected to remain low, coming in at around this year's projection of US$54 per barrel," they said.

"On the domestic front, some wage cost pressures remain, but their pass-through to consumer prices will continue to be constrained by the subdued economic growth environment."

The sharp fall in prices last month took economists by surprise, with many of them expecting a 0.4 per cent fall in headline inflation.

ANZ economist Glenn Mcguire said apart from the deflationary effects from falling car prices and housing prices, the result of government policies, another factor at play could be the weak economy.

He said the "near-recessionary conditions" could lead to downward pressure on prices over a more sustained period than previously thought.

But other economists believe prices will bounce back in the new year, with inflation coming in at above 1 per cent for 2016.

Barclays Capital economist Leong Wai Ho said with car prices - which have been a major factor for the drop in inflation this year - unlikely to fall much more from current levels, inflation will start to creep up again next year.

"We think core inflation also likely bottomed in October and is on course to trend higher next year as the administrative distortions fade away," he said.

This article was first published on November 24, 2015.
Get a copy of The Straits Times or go to straitstimes.com for more stories.