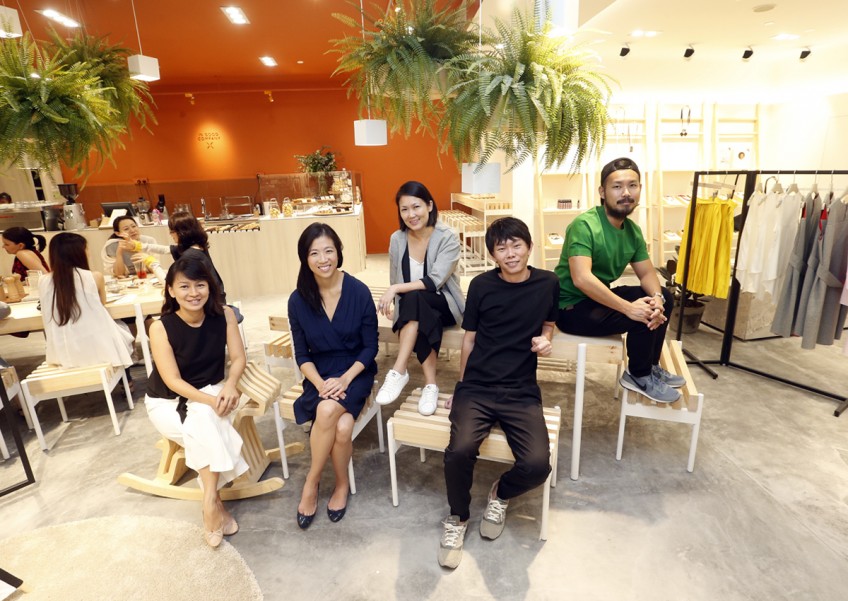 Thousands of shoppers and commuters hurry through Raffles City each day, most oblivious to one thing: There is a vegetable farm above their heads.

The enormous 10,000 sq ft urban rooftop garden at the retail-commercial complex is home to herbs and plants, including aloe vera, tarragon, passion flower and cat's whiskers.

Run by urban farming company Edible Garden City, the crops are not for any restaurant or bar.

Instead, they are grown to make calming tinctures for beauty brands under the Spa Esprit Group. The local beauty and lifestyle company is behind apothecary spa, Spa Esprit and waxing specialists Strip.

The four-year $1 million project that launched in July this year is just one of the many unexpected business partnerships that have cropped up in recent months. Diverse Singaporean companies are coming together to collaborate in unexpected ways.

For Spa Esprit Group's chief executive Cynthia Chua, 44, collaborating was the best way to venture into an unfamiliar area. "Even though I had learnt about the concept of urban farming three years ago, I didn't think it was feasible in Singapore until I met the passionate farmers behind Edible Garden City," says Ms Chua.

"It might seem strange that a beauty brand is working with a farm, but for us, it was a fantastic way to explore a new area of growth and learn from the technical expertise brought to the table by the team at Edible Garden City."

As a long-term tenant at Raffles City, Ms Chua floated her idea for an urban garden to the building's management earlier this year and they let her use the space rent-free for a year.

"As a conceptual retail store, we knew we wanted to have a food and beverage (F&B) element within our space but didn't know where to start, seeing as we knew nothing about the F&B industry," says Jaclyn Teo, 37, one of four co-founders of In Good Company.

The group decided to cold call Plain Vanilla Bakery's owner Vanessa Kenchington to ask whether she would like to collaborate with them.

"None of us even knew her," says the brand's designer Sven Tan, 36. "We just loved her stuff and thought there was no harm trying our luck."

It turned out that Ms Kenchington, 31, was intrigued.

She says of their first meeting: "We had a real synergy of ideas and realised that our customer profiles were very similar even though our businesses were so different. Plus, because their proposal offered an opportunity to test a cafe concept with a savoury menu, it was win-win all around."

The result is an airy, organic retail-cum-deli space - offering customers a chance to take a break and have a quiche or a cupcake in between browsing the racks.

"Not only did the partnership create a relaxed, communal vibe and give dads and kids a place to relax while mum shopped, but it also increased customer dwell time in the store," says Ms Teo. "That has been the best part for all of us about the whole experience."

Encouraging customers to stay and browse was what local bookbinding company Bynd Artisan was going for too, when it decided to open a small cafe within its newest atelier at Holland Village last month.

"We wanted our customers to be able to grab a cup of tea or coffee and some sweet treats while attending our workshops or waiting for their items to be customised," says Ms Winnie Chan, founder of Bynd Artisan's parent company Grandluxe, who is in her 40s.

"And since we constantly collaborate with artists for our stationery products, it seemed only appropriate to do the same to kick off our new F&B concept as well."

Tapping on the expertise of her uncle Ignatius Chan, who owns iconic fine-dining establishment Iggy's, the two collaborated on a set of eight petit fours with an Asian twist - umeshu jelly, popping candy chocolate and green curry, gado gado and salted egg yolk macarons - all presented in a beautifully designed keepsake box shaped like a book. The limited edition set is priced at $30.

Says Mr Chan of the experience: "I really enjoyed the challenge. It gave me a chance to learn about a business completely different from my own, while still paying homage to the handcrafted work that binds us both."

The limited-edition set is a runaway success.

Madam Janice Ho, 44, who bought four sets of the box to give to friends and family, says: "It's a collaboration that combines two different industries in a unique way. I love how both these businesses have stepped out of their comfort zones to create something different and exciting.

"As a customer, that's what makes me happy to support them," adds Madam Ho, a personal wealth manager.

Another consumer, engineer Josef Mahadevan, 39, however, feels that it is important that businesses make the effort to sync their style or ideas before collaborating with each other.

"It's so evident to the customer when businesses are blindly jumping on a bandwagon or partnering on a superficial level," says Mr Mahadevan.

"Personally, I feel that collaborations like that become very gimmicky and end up turning the customer off both brands entirely."